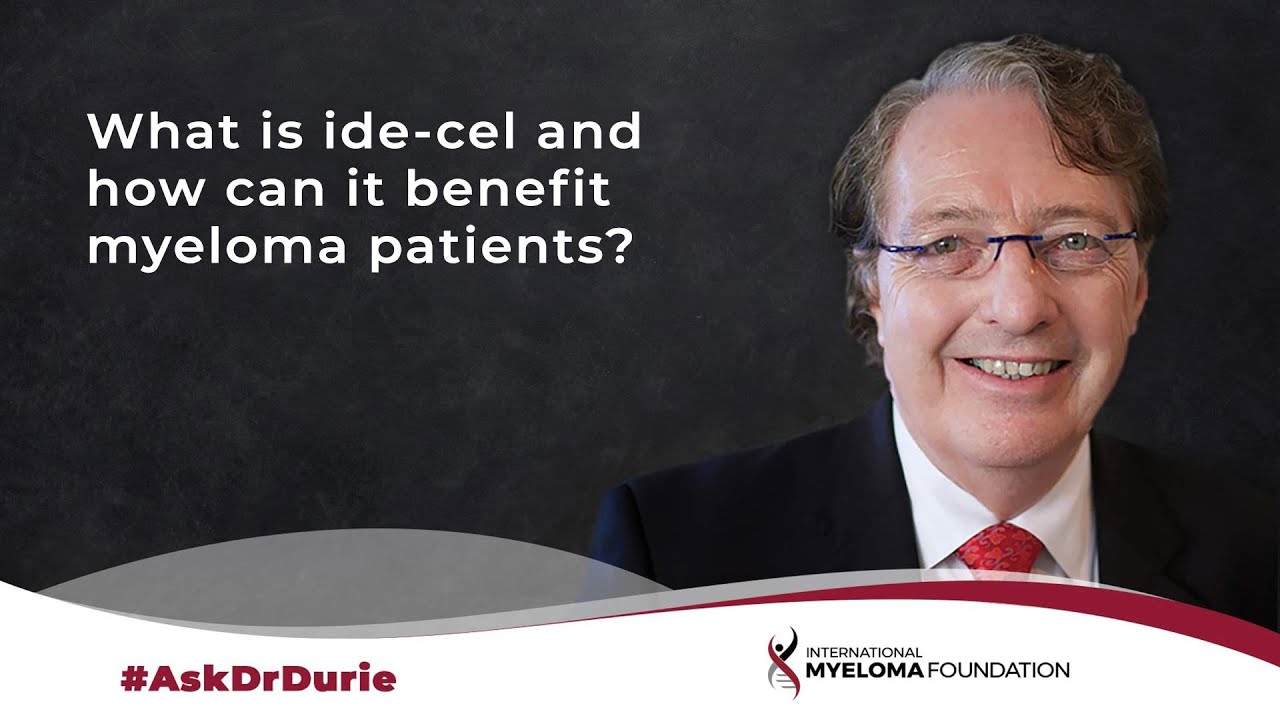 What is ide-cel and how can it benefit myeloma patients?

In this episode, myeloma expert Dr. Brian G.M. Durie discusses ide-cel treatment and how it can be used in treating patients with multiple myeloma.

Ide-cel is a promising new therapy where a third of patients reported an average treatment-free remission period of 19 months. It is currently under review by the FDA.

If you have a question that you’d like to suggest for a future episode of Ask Dr. Durie, please submit it to[email protected]

To reach the IMF InfoLine Coordinators, please call 800.452.2873 or email them at [email protected]

This week’s “Ask Dr. Durie” is from an alert myeloma patient who noted a recent publication in the New England Journal of Medicine about a medication called “ide-cel.” And so, ide-cel is an abbreviation for a much longer combination of words referring to a treatment which was, up until recently, called bb2121.

And so, this was incredibly encouraging. The side effects were definitely manageable. This type of CAR T-cell therapy does have some special side effects including something called cytokine release syndrome, CRS. However, only 5-percent of the patients did have this type of reaction, which can have some effects on the nerve tissue. So, this was, this was encouraging. This type of therapy also does cause a reduction in the blood counts at a significant degree for the first week or two until the blood counts have a chance to recover.

But, the very, very, good news for patients is that the lengths of the remissions were good, and the overall survival has been excellent nineteen point four months. And so, for patients who achieved the deep, deep, responses. The average length of the remission was nineteen months. And so, patients receiving this therapy have been just so pleased that they are in remission for one year, two years, some even a little longer. And they’re off therapy. The normal procedure for a myeloma patient is to go in once a month and have ongoing therapy. And so, for the first time in many years, many patients are experiencing a treatment-free remission period, which is truly wonderful.

So, there is a lot of enthusiasm about this therapy. There’s a lot of interest in; “what can we expect if this therapy could be introduced earlier in the disease course?” And so, a new trial, KarMMa-4 is getting started. And patients with high-risk myeloma, where the therapy will, in fact, be introduced much earlier.

And so, BOTTOM LINE: This is really an exciting and promising game-changing therapy, actually. And so, we’re looking forward to the results of the ongoing FDA review. It is expected that we will have some feedback from the FDA by the end of March. And so, the results are promising. And so, we are hoping that this will allow broad availability of this type of new therapy.