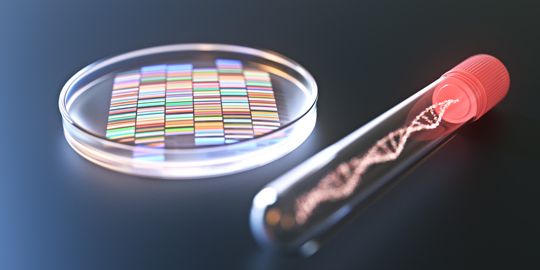 Black Swan Research Initiative® researchers are working at locations throughout the world on multiple strategies to treat the different types and stages of multiple myeloma. Black Swan Research Initiative clinical trials seek to detect and treat monoclonal gammopathy of undetermined significance (MGUS)—the precursor to multiple myeloma. Additionally, clinical trials are being conducted to develop ways to deter resistant disease as well as to identify  genetic and environmental risk factors that cause the onset of multiple myeloma.

The BSRI team has defined and overcome the first obstacle to finding a cure for myeloma by developing a very sensitive, reliable, standardized, and affordable test to quantify and characterize any myeloma cells that may remain after a patient is in complete response (CR). The new test, known as Next-Generation Flow (NGF), is a flow cytometry technique paired with a specialized software package developed by researchers in Spain to detect even a single myeloma cell surviving among one million bone marrow cells.

Miniscule amounts of myeloma cells that remain after treatment can cause patients to relapse. The BSRI believes that detecting this minimal residual disease (MRD) through ultra-sensitive NGF technology, then eliminating it through the assertive treatment until MRD-negative is achieved and maintained for five years represent the first step to achieving cure.

In October 2016, 120 researchers from myeloma laboratories around the globe gathered in Salamanca, Spain, for intensive training in NGF. Researchers from 60 labs in 26 countries worldwide attended the training workshop, as well as attendees from 12 sites in the US. The BSRI’s MRD Consortium represents centers in North and South America, Africa, Asia, Australia, and Europe. Three of the labs in the US – Mayo Clinic (Rochester, MN), Roswell Park Cancer Center (Buffalo, NY), and the SWOG Lab at the Levine Cancer Center (Charlotte, NC) – are reference labs to which patient bone marrow samples can be sent for MRD testing from any other hospital, clinic, or doctor’s office.

On March 10, 2017, the journal Leukemia published an article by members of the BSRI team on the design and validation of NGF. With accurate and accessible MRD testing, we have an endpoint to assess deep response.

Launched in November 2016, Iceland Screens, Treats, Or Prevents Multiple Myeloma (iStopMM®) is the largest population-based screening study for myeloma and its earlier disease precursors that has ever been attempted. The treatment portion of the study is, along with the ASCENT and CESAR clinical trials, one of three BSRI-funded “Cure” trials.

The first step of the project is the screening of approximately 120,000 residents of Iceland who are over 40 years of age for evidence of monoclonal gammopathy of undermined significance (MGUS), smoldering multiple myeloma (SMM), or myeloma. Researchers, under the direction of principal investigator Dr. Sigurdur Kristinsson, calculate that approximately four percent of those screened will have MGUS, which will add up to over 4,000 MGUS patients with full accrual.

With its small and networked population, and centralized healthcare system, Iceland is the ideal place to conduct such a study. Not only will this project allow researchers to observe patterns of occurrence, but they will be able to follow subjects with early disease to see how it progresses. Moreover, monitoring patients with MGUS for many years will demonstrate which prognostic tests are most reliable as indicators of disease progression. We will also learn which patients benefit most from early intervention, as those identified with high-risk smoldering myeloma will be invited to participate in a treatment trial.

Because much of the Icelandic population has already undergone genetic coding, iStopMM researchers will be able to use this genetic data to look for linkages to family gene patterns in those with MGUS. In addition, a questionnaire asks participants about family history and exposure history to see what conditions may lead to the disease.

The chances are excellent that answers will be found to help the BSRI team understand the biology of why people develop MGUS and how it can be prevented. To date, approximately 80,000 adults over the age of 40 have volunteered to take part, making iStopMM the largest screening project for any type of cancer ever conducted.

All enrolled patients will receive a reduced dose of carfilzomib, lenalidomide, and daratumumab for one year of maintenance. At this point, it is anticipated that approximately 80% of patients will achieve MRD negativity (versus 62% already achieved with KRd in the CESAR trial), said Dr. Brian G.M. Durie. MRD testing will be done at diagnosis and during therapy, allowing intensive tracking of the disease in patients. The number of cycles of therapy will be determined by the individual patient's response.

The ASCENT trial will open for accrual in March 2018 at 12 IMF Consortium sites. Further information may be found here.

Along with the ASCENT and iStopMM clinical trials, the CESAR trials is one of three BSRI-funded “Cure” trials. The CESAR trial is ongoing in Spain with Professor María Victoria Mateos as the Principal Investigator. CESAR uses the combination of Kyprolis, Revlimid, and dexamethasone (KRd) with autologous stem cell transplant in the same setting as ASCENT.

With a median follow-up of 28 months, 94 percent of patients are in remission, with 62 percent having undetected MRD at the 10-6 (zero out of a million cells). It is hoped that the addition of daratumumab in the U.S. ASCENT trial will enhance the undetected MRD level among patients to approximately 80 percent (at 10-6 level). Because the CESAR trial has been well tolerated, there is great optimism moving forward. Although longer follow-up is required, this curative strategy for high-risk SMM is encouraging.

Results of the CESAR trial were published in the journal Blood.

The Black Swan Research Initiative team has taken the first steps to achieve cure for a subset of patients—those who rapidly achieve MRD negativity with currently available therapies. The next challenge is to eliminate residual disease in patients who remain persistently MRD positive, and prevent the development of recurrent resistant disease. Major BSRI efforts are underway to study recurrent and resistant disease, and develop appropriate treatment protocols.

Multiple BSRI-sponsored clinical trials are being set up in the US, Europe, and the Asia-Pacific region to study and treat patients with MRD-positive disease. These studies will use new therapies to attempt to eliminate resistant MRD myeloma cells.

In addition, there are more than 40 BSRI projects under way around the globe to study various aspects of residual disease.

An ongoing study of long survivors will help better characterize and understand the nature of their disease, treatments, and response to treatment.

A Multinational Consortium of Myeloma Experts

The first BSRI project was with the University of Salamanca in Spain. Its aim was to develop the much-needed precise, sensitive, and cost-efficient MRD test known as Next Generation Flow MRD testing. Today, more than 50 projects are occurring to achieve the basic and translational research that is needed to move closer and closer to a cure .