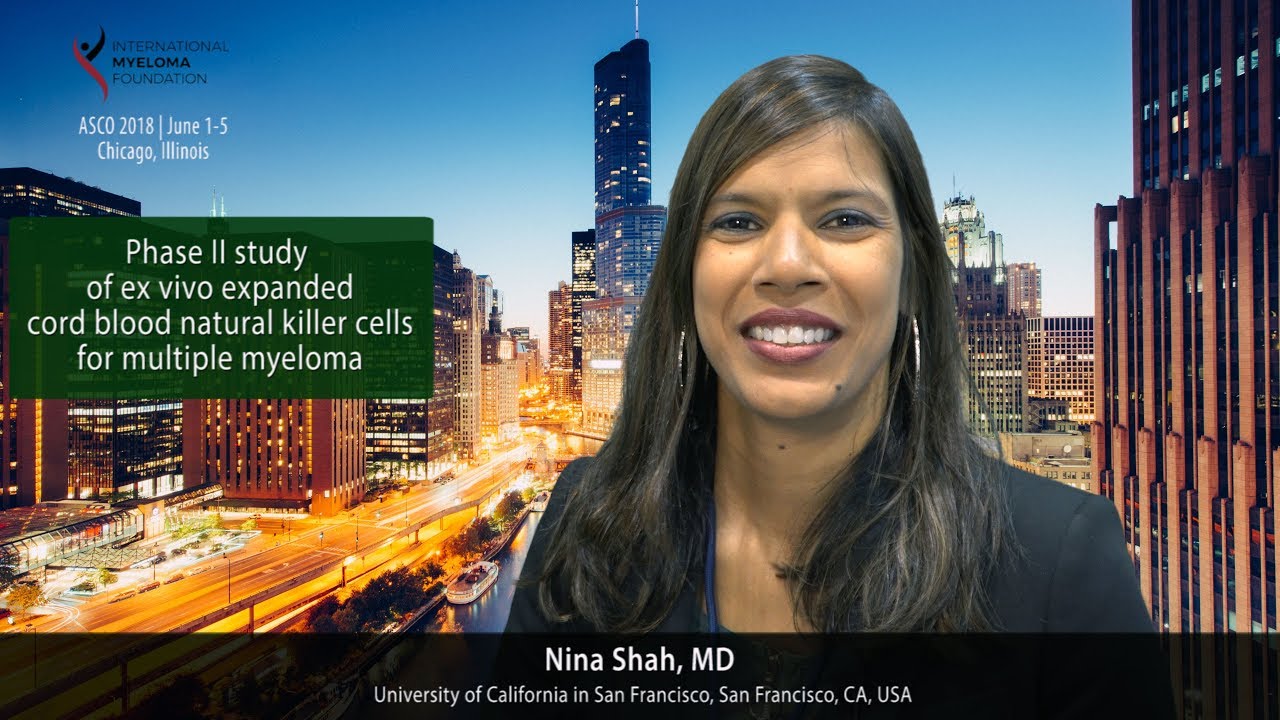 In this video, Dr. Nina Shah (University of California at San Francisco) presents the results of a phase II study that uses natural killer (NK) cells that were derived from umbilical cord blood to work against multiple myeloma. The reasoning behind this strategy is the ability of NK cells potentially work against several malignancies; multiple myeloma is one of these malignancies.

The patients in this trial tended to be a higher risk group, with at least 75% of them having an adverse feature of the disease, such as ISS-3 disease, high-risk cytogenetics, a history of progression, or relapse.

The patients were followed for over two years. At day 100, at least 79% achieved Very Good Partial Response (VGPR) or better, and 61% achieved MRD-negativity. So far, there have been no serious safety concerns, such as graft-versus-host disease, cytokine release syndrome, or neurotoxicity. They also detected some port-blood NK cells in the patient, suggesting that they will be able find these NK cells and tell if the NK cells are active in the future.

After about two years of follow-up, three patients died in this study, with about 90% overall survival. The researchers estimate 52% of patients may have up to a three-year progression-free survival (PFS), yet it is not yet known for sure. In this high-risk group of patients, Dr. Shah finds this encouraging.

A lingering question is “What do these NK cells do?” Unfortunately, researchers do not quite know yet how much the NK cells did in addition to chemotherapy, but they hope to learn by continuing to follow this group of patients and to complete correlative studies to find out how the NK cells were acting.

Dr. Shah comments that, in the future, the goal is to combine cellular therapy with the tools already in place. For example, Dr. Shah thinks that combining NK cells with an antibody therapy such as elotuzumab, and potentially use the knowledge of T-cells to engineer NK cells to hopefully last longer. And maybe, like CAR T-cells, make CAR-NK cells to be more specific toward the myeloma.

Dr. Nina Shah is an Associate Professor at the University of California in San Francisco. She treats multiple myeloma patients at the Hematology and Blood and Marrow Transplant Clinic. Dr. Shah's areas of focus include the intersection of immunology and oncology and helping patients fight multiple myeloma by boosting their immune systems. View Dr. Nina Shah's full biography here.

What are myeloma treatment options for a patient with bipolar disorder?