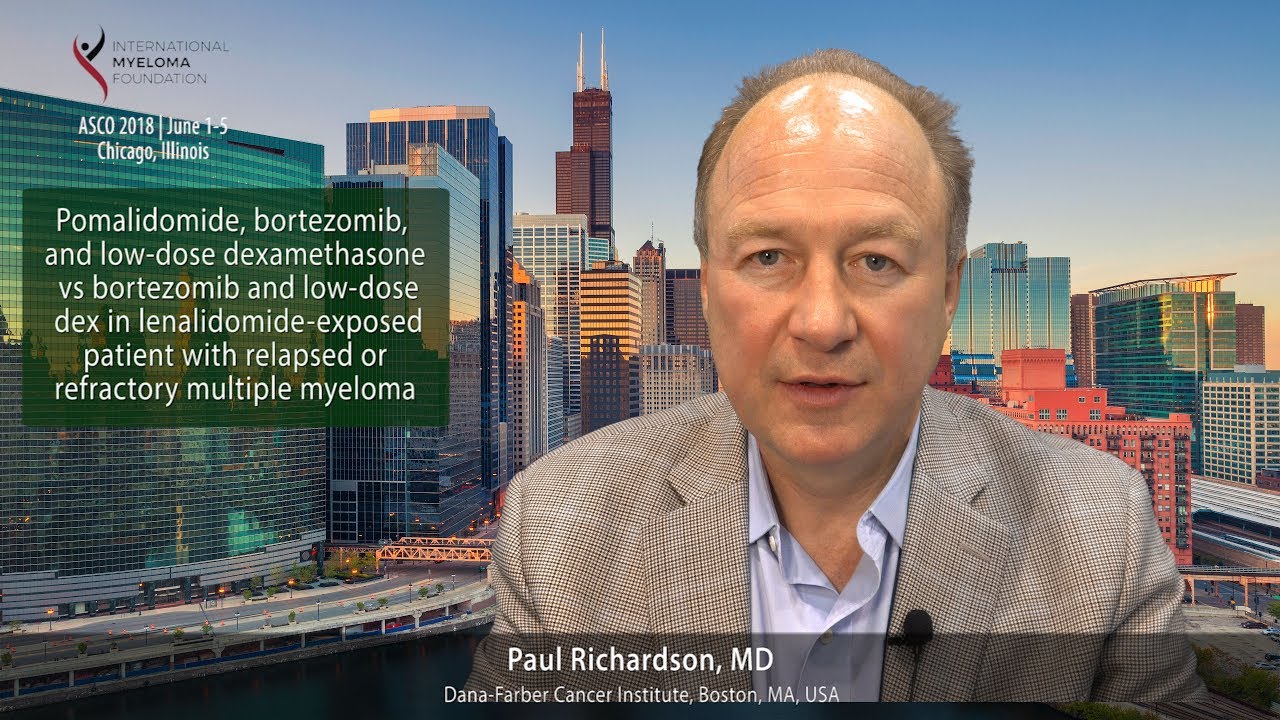 Pomalidomide, bortezomib, and low‐dose dexamethasone vs bortezomib and low-dose dex in lenalidomide-exposed patients with relapsed or refractory MM

Dr. Paul Richardson Discusses the Results of the OPTIMISMM study

In this video, Dr. Paul Richardson (Dana Farber Cancer Institute, Boston) discusses the results of the OPTIMISMM study, an international phase III trial that compares the three-drug combination of pomalidomide + bortezomib + dexamethasone (PVd) with the two-drug combination of bortezomib + dexamethasone (Vd) in relapsed/refractory multiple myeloma patients who have had at least one to three lines of prior therapy. These patients may have been refractory to lenalidomide treatment, but had to show response to proteasome inhibitors.

The results were derived from more than 550 patients who were randomly assigned on an one-to-one basis to each arm. These results showed that the three-drug combination, or PVd, was superior to the two-drug combination of just Vd. The benefits were particularly hopeful for patients who had had one line of prior therapy.

Of the patients in this study, 70% were refractory to lenalidomide therapy. In that group, these patients also benefited quite remarkably to the three-drug combination of PVd, compared to those who just received the two-drug combination.

Also, of note, for the group of patients who had received one prior line of therapy, the progression-free survival benefit was around 10 months in favor of the three-drug combination, with a hazard ratio of 0.5.

Dr. Richardson asks, “So where do these results lead us?” The platform of pomalidomide-based treatment with a proteasome inhibitor after initial treatment is arguably a new standard of care for patients with relapsed multiple myeloma.

Future directions will include evaluations of correlative studies, including examining patient samples to understand who benefits and why. Also, they will continue to look at minimal residual disease (MRD) status of patients and conduct a quality of life analysis as well. Furthermore, in the future, PVd combined with monoclonal antiboides may also prove to be a beneficial treatment regimen.

IMWG Conference Series - Copenhagen 2016: Are you proactive regarding your patients’ comorbidities?