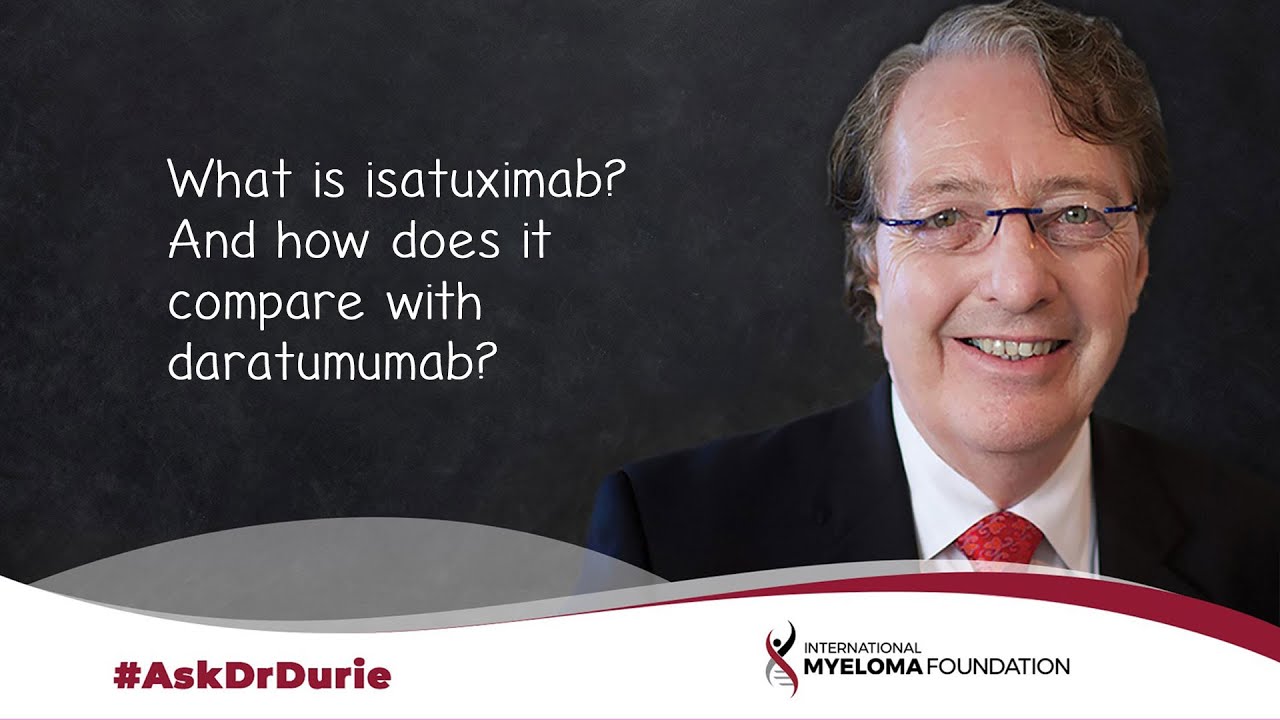 This week’s Ask Dr. Durie comes from a patient who wants to know about a new medication called isatuximab, that he heard about.

So, this is a new agent that we have been hearing more about here recently. And, it is a monoclonal antibody, and it is very similar to another monoclonal antibody that we’ve all heard a lot about for several years now, and this is called, daratumumab.

And so, what is the status of the isatuximab? Well, the daratumumab, you’ve heard a lot about in the last few years, and this has been evaluated and tested throughout the course of the myeloma, and is actually approved by the FDA not just in relapsed/refractory disease, but in earlier relapse and in combinations to be used in the frontline setting.

So, this is very well along in the myeloma research field, and to the extent that it is FDA approved and available. Isatuximab, on the other hand, is in a variety of trials. Most recently, it has been in a very important trial called the ICARIA trial, ICARIA. And this is a trial in which isatuximab combined with pomalidomide and dexamethasone, has been compared with the doublet of pomalidomide and dexamethasone.

And, this combination has been evaluated and shown to be a very beneficial in the comparison of the three-drug combo with isatuximab verses the pomalidomide and dex.

And so, at the recent ASH meeting held in December, there were several important updates in the data with this particular combination. It was studied in patients who were more elderly, and the results were good. There were evaluations of quality of life, and these were quite promising, showing improvement in bone pain and other features of the disease. There was an evaluation of the ongoing benefit and the depth of the response. And, deep responses did occur more frequently with the three-drug combination verses the doublet, as you might imagine.

Another study was presented, which showed that using mass spectrometry, the monoclonal antibody can be picked up in the blood. And so, this is very important in patients who have a deep response where you don’t want to confuse the spike, the monoclonal spike with the medication, with the monoclonal spike related to the myeloma. And so, it turns out that for both daratumumab and isatuximab, mass spectrometry can be helpful to make sure that the residual spike is just the drug and not any remaining disease in patients who have had a deep response.

And so, the BOTTOM LINE here, is that isatuximab is an important new monoclonal antibody similar to daratumumab, and most likely, it will become available following review by the FDA this year. And so, there is an expectation that the three-drug combination, isatuximab, pomalidomide, and dexamethasone, will indeed get FDA approval. And, hopefully later this year it will be available and can be used in this relapse setting.

Read more
Previous Post
Should FiSH testing be done at relapse?
Next Post
Can infections, such as Helicobacter pylori, trigger multiple myeloma?