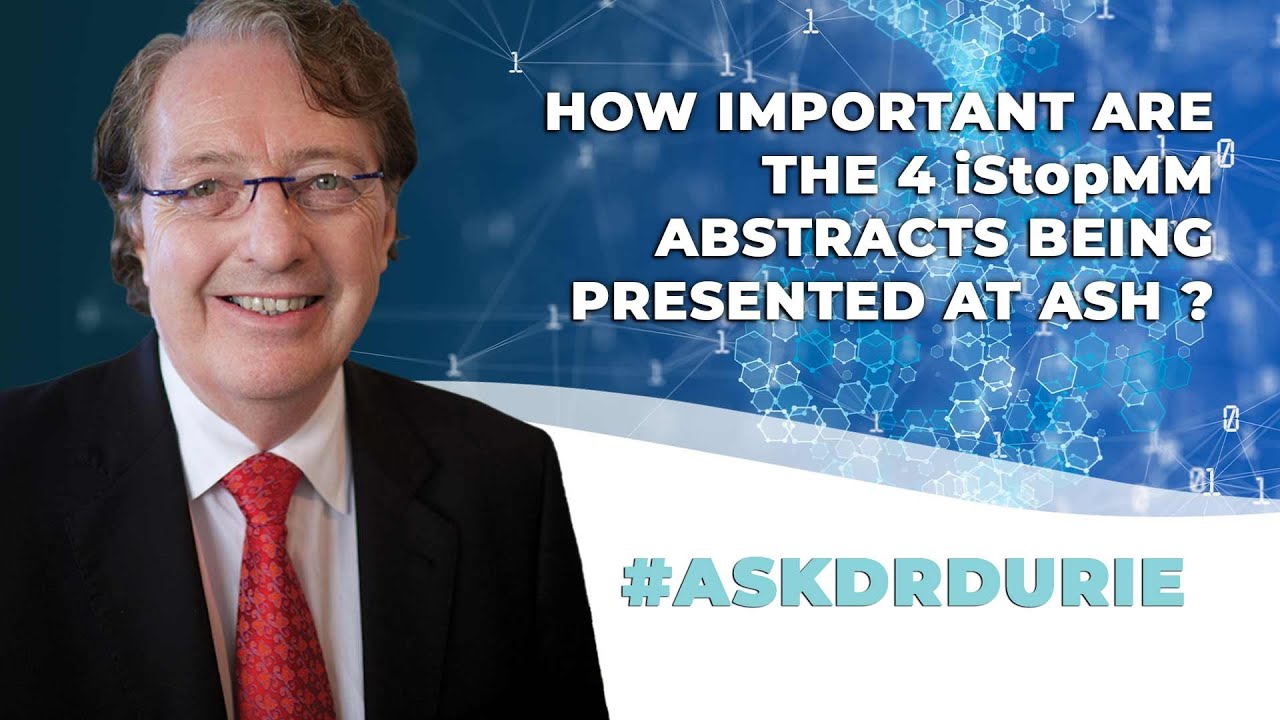 How important are the four iStopMM abstracts being presented at ASH for myeloma patients?

How are the four iStopMM abstracts being presented at the 2021 ASH meeting relevant to myeloma patients?

In this episode, myeloma expert Dr. Brian G.M. Durie discusses the 4 iStopMM abstracts being presented at the ASH 2021 meeting.

The BOTTOM LINE: While these are early findings being presented at the 63rd ASH meeting, the iStopMM study will be revealing new and important observations for years to come.

This week’s “Ask Dr. Durie” came from a patient who had just noticed that at the upcoming ASH meeting, there are four abstracts scheduled for presentation that are oral presentations and they come from the same Iceland research project called iStopMM, Iceland Screens, Treats, or Prevents Multiple Myeloma, which is an IMF-funded project.

Four oral presentations from a single project, I have to say, are pretty amazing. This patient wants to know that if that’s the case, this must be important. So, in what way are these data important?

Because the patients are agreeing, they sign through the IRB (institutional review board) to potentially have extra bone marrows done, to get extra scanning tests and blood work done. So, it is amazing that the Icelandic people have been so committed to this research project.

And so, the initial results beyond just documenting the success of the screening project led by Dr. Sigurdur Kristinsson at the University of Iceland, I should say my congratulations certainly go to Sigurdur and his team who have shown that they can do this, that they have important findings, for example, in the MGUS patients, over three-thousand picked up so far, they’ve found out that the outcomes with COVID infection were not more than the general population, an important finding.

They also noted that in the screening they picked up a lot more patients with smoldering myeloma than they expected. And this is important because it gives the opportunity to intervene early and give the chance for possible curative therapy, part of the Black Swan project where we’re offering intensive treatment early to achieve the best response.

So, the BOTTOM LINE is that these are just the early findings from the very, very large study, and ongoing there will be very many new observations. One is instead of using serum protein electrophoresis (SPEP), we’re using mass spectrometry to measure the myeloma protein left. And this will lead to a lot of new findings.

In addition, for all of the individuals in Iceland who have MGUS or don’t have MGUS, we have full DNA genetic sequencing information available. And so, we will be able to determine what are the genetic features that predispose to the onset of MGUS and then to the progression into multiple myeloma. And so, the presentations at ASH are very important but are just setting the stage for what will be many important observations in the months and years to come.

What is this new Black Swan project called iStopMM?

Read more
Previous Post
Should myeloma patients change their treatment to try to improve their response to the COVID-19 vaccine?
Next Post
Adapting Clinical Practice to a Rapidly Changing Therapeutic Landscape in Multiple Myeloma