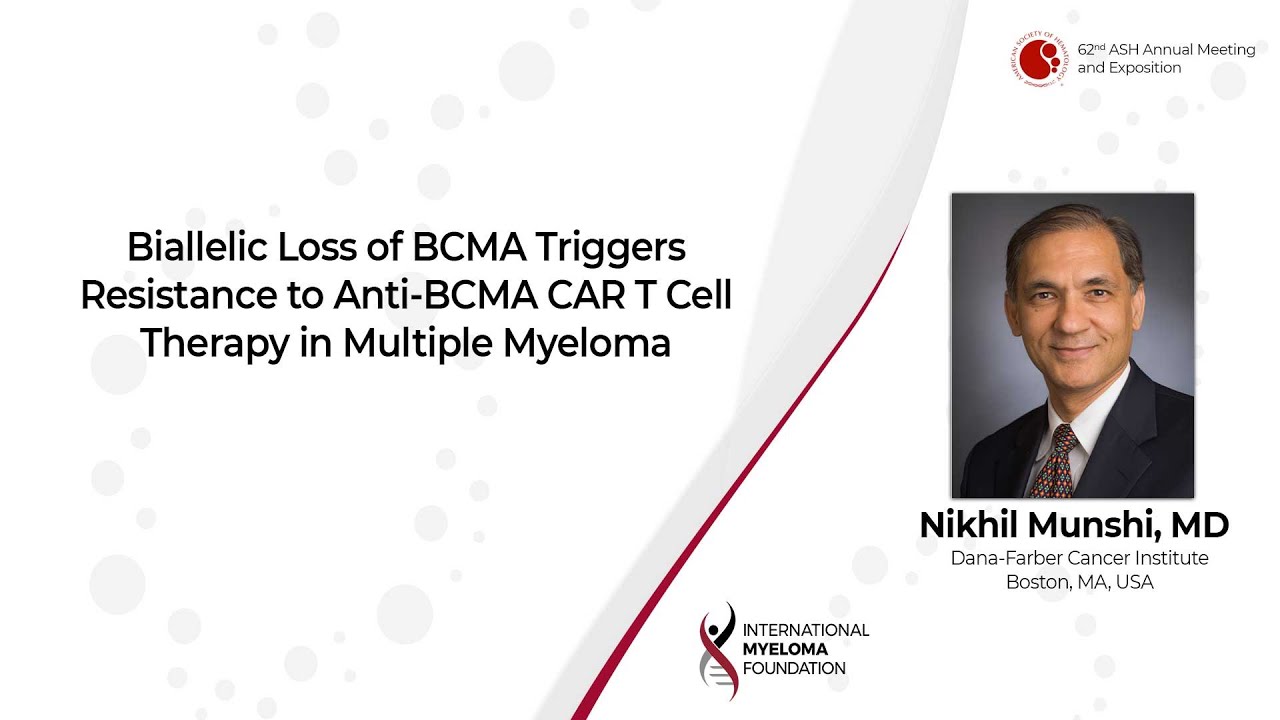 Presented at the American Society of Hematology (ASH) meeting in 2020, Dr. Nikhil Munshi discusses the results to identify biallelic loss of BCMA locus as a potential resistance mechanism to BCMA targeting therapy in patients with multiple myeloma.

What is the purpose of this study?

Chimeric antigen receptor (CAR) T-cell therapy targeting B-cell maturation antigen (BCMA) has provided deep responses in relapsed/refractory multiple myeloma. However, median progression-free survival has been less than 12 months, and amongst the small number of patients retreated at the time of progression with the same CAR T product, responses have been infrequent.

The data also demonstrate the ability of myeloma cells to survive without BCMA expression. With the growing number of BCMA-targeting therapeutic modalities under development, we would expect to see such occurrences more commonly in the future.

This is the work that Dr. Samur will be presenting and it's focused on BCMA CAR T-cells. We had really good presentations today of two of the prime candidate to get hopefully approval during the coming years both cilta-cell and ide-cell. Both the data were very clear, with very high response rates 75 to 100 or 95 percent response rate. If you look at PFS it ranges from 8 to 12 months, maybe a little bit more with one product versus another product. Relapses do happen.

One of the questions was to Dr. Hege. How long is the tail in? Maybe 20 percent, maybe not but still 80 percent of patients surely respond within a short period. This presentation is focused on trying to understand one of the possible mechanisms of resistance that could be present.

This is the patient who was 53 years old, who had a complex karyotype with clonal (8:12) translocation, (11:14) translocation, and also deletion 13 with prior four lines of therapy and had 18 months from diagnosis to coming for CAR T screening. Quick relapses of a median range from four to five months including transplant. The patient received ide-cell at a starting dose of 150 million cells, which is the lowest of the three dosages utilized. The patient had a partial response by three months as you see on the graph on the right side, did not reach the VGPR level.

The bottom line message from here was that with the first infusion which is the graph in blue, there was almost a six log increase in the expansion of the CAR T cells happened around day 11, which is the general median for all patients in the whole bigger study. There was some persistent up to 60 days and then it became below the detection level. Second CAR T cell, there was minimal expansion and the numbers came down very quickly. This was the data available when we analyzed these patients' samples.

We had 38,000 cells sequenced - single-cell sequencing was done from eight different samples. This is the standard thing that one does use single-cell, where you can look at all the microenvironmental cells in the bone marrow for each time point as a group together. We looked at all various immune cell components from CD4, CD8 cells, plasma cells, B-cells, monocyte, macrophages.

The general conclusion I would give you here is that there was not a very significant trend or difference between levels of these cells immediately after the first infusion and also, after the second infusion. There were no obvious trends. We have looked at various T cell subsets and looked at checkpoint inhibitors.

There was not a very significant difference between expressed checkpoint inhibitors on T cells and their relative level and expression level over time, suggesting that immune changes did not appear to be having a significant impact on the lack of response to the second infusion.

We investigated more tumor intrinsic factors. The extrinsic factor did not seem to be planning out to be of importance. We looked at the tumor intrinsic factor and one of the important initial observations was that the soluble BCMA, which was measured in this patient - not in real-time but subsequently, was very high before CAR T infusion. It came down very quickly to an almost undetectable level within one month and reached the lowest level by the three months and patient at the maximum response.

However, this level at the time of relapse did not go up. The patient did not have an increase in soluble BCMA at the time of relapse, which you would expect because all myeloma cells do express are supposed to express BCMA. That led us to then look at the plasma cell component of the single-cell sequencing data.

We could identify myeloma cells from the normal plasma cell in this patient because of the patient having t(11;14) CCND1 expression, expression of XBP1, loss of RB1, which was no loss of chromosome 13, but the loss of RB1 was also one of the markers of the disease, and of course, using SDC1 which is CD138.

We looked at myeloma cells but were predominantly separated from the normal plasma cell and the constituents of that. Even when we use the single-cell sequencing and try to impute the structural copy number changes, the first observation was that patient had a loss of chromosome 16p, which is where BCMA Locus is present.

We performed whole-exome sequencing. In whole-exome sequencing, we confirm that there was a clonal deletion of 16p, meaning one copy was deleted totally in this patient. This patient also had 17p-deletion, which was four percent before the first infusion. However, at the time of the second infusion, which is where this particular sample that I'm showing you right now comes from, the 17p had become close to clonal deletion. The clonality of 17p had also increased, here.

If you look at the origin of the disease at the time of CAR T infusion, there was a 16p deletion np53, but on a very small proportion of patients, p53 was more quantitative with four percent. Following the first infusion in a significant cycle reduction, a clone that emerged had attained the clonality for BCMA-loss, both with one early loss and the second allele being lost through the mutations.

Then we have studied further the deletion 16p and deletion 17p. What we have observed using multiple larger data set is that deletion 16p is observed in between 4-to-14-percent of the patient population. Predominantly it is subclonal, so when we are treating the patient for the first time with BCMA CAR T cell, we do not need to look for BCMA in specific because they're usually all expressed 90 plus percent of the patients do express. However half of the 16p events were subclonal, so we need to keep that in mind.

We need to keep this in mind and require further investigations to understand the co-occurrence of this phenomenon. What our study shows that in the chronology of event evolution 16p and 17p may be co-evolving, providing a clue about the expression of BCMA As we utilize various BCMA-related products from ADC's, to specifics, to CAR T-cells.

The conclusion would be that this human interesting factor may play a role. it seems to play a smaller role and maybe more so at the subsequent time point if you're doing re-treatment. At a later time point, some deeper evaluation of this locus may be warranted and may be necessary.

Dr. Nikhil Munshi received his medical degree from Maharaja Sayajirao University, followed by an internship and residency in internal medicine at Shri Sayaji General Hospital and Maharaja University in India. He then completed an oncology fellowship at Johns Hopkins Oncology Center, and an hematology/oncology fellowship at Indiana University Medical Center. Dr. Munshi is currently professor of medicine in the Department of Medicine at Harvard Medical School, as well as an attending physician at VA Boston Healthcare System and Dana-Farber Cancer Institute.