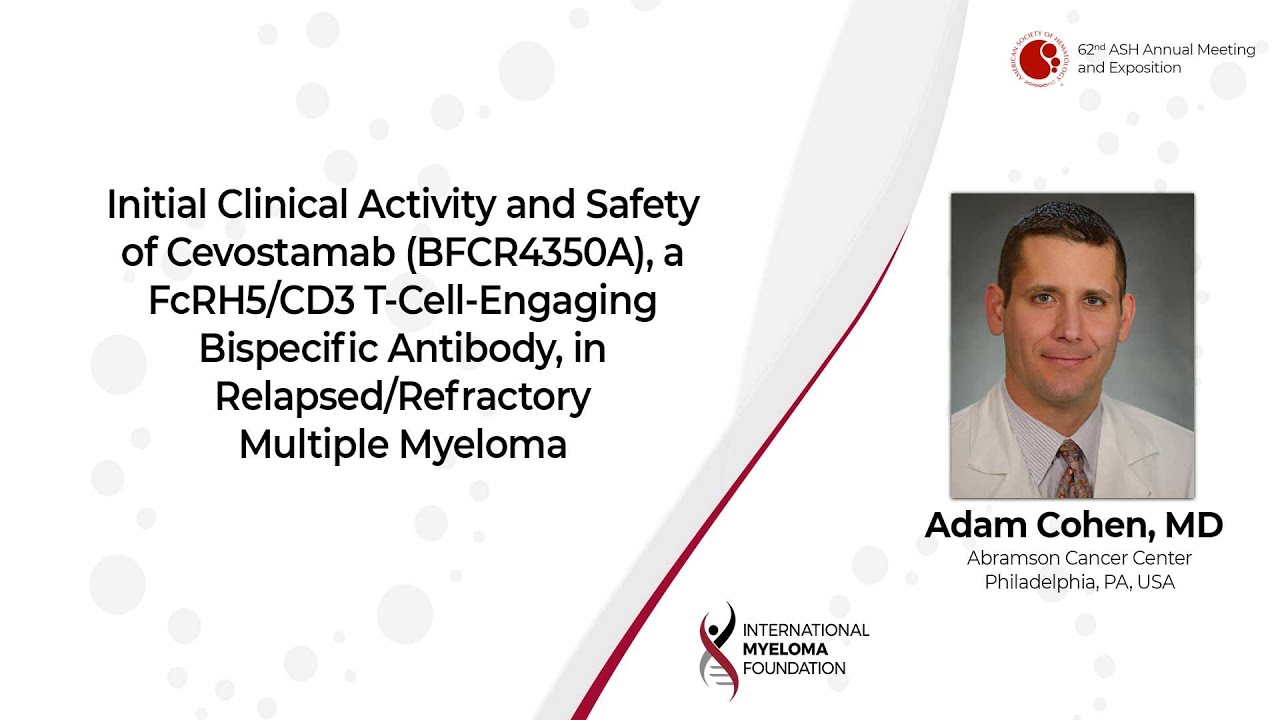 Clinical activity and safety of cevostamab in relapsed/refractory multiple myeloma

Updates on Cevostamab in Relapsed/Refractory Myeloma From ASH 2020

What is the purpose of this study?

FcRH5 is a new target in multiple myeloma, but it is almost universally expressed in myeloma patients making it an attractive target for new therapies.

The early findings show proof of principle although noting that it is too soon to say how it will fit into treatment options.

So just some breeze background FcRH5 is a cell surface receptor that's expressed exclusively within the b-cell lineage. the expression increases on terminally differentiated plasma cells. It's not expressed in any other cell type in the body, and this makes it an attractive target for myeloma therapy.

FcRH5 is expressed almost universally on myeloma cells. Although, like BCMA, the intensity of expression can vary from patient to patient. Cevostamab is an FcRH5/CD3 bispecific antibody. It binds to a membrane-proximal domain of FcRH5. This had significant preclinical activity against myeloma cells, both in vitro and vivo. That led to this initial first-in-human phase one study.

What I'll be presenting are the patients that have been enrolled so far in the single step-up dose escalation. The including criteria are shown here. These are heavily refractory patients for which no established therapy was available or appropriate, and no prior exposure to CAR T cells other bi-specifics, and ADCs were allowed.

Three-week infusions - and this was given as an IV infusion for up to 17 cycles of disease progression or toxicity. The step-up dosing was used to try to mitigate the risk of a severe CRS.

Patients got a low dose of day one and then, if tolerated well, starting on day eight they got the target dose and then got every three-week infusion starting cycle two, thereafter.

They were hospitalized for up to 72 hours for the first two infusions to monitor for CRS and other toxicities and then could get outpatient dosing afterward. They were pre-medicated with Tylenol, Benadryl, and dexamethasone. The primary objective of this part of the study is safety and tolerability in the recommended phase II dose.

On the right, you can see the study schema. You can see the step-up dosing initially started very low at 0.05 and went up to 3.6, and then this cycle, one-day/one-dose was fixed at 3.6 with subsequent further escalation from 20 milligrams up to 160 milligrams. Dose escalation is still ongoing, and a recommended phase II dose has not yet been identified.

To keep it brief, I only give a few slides. I'll tell you about the patient population. There were 53 patients treated to date. At the time of data cut off the median, prior lines were six. It was 72-percent we’re triple-class refractory, 45-percent penta-refractory, 21 had a prior BCMA therapy, and 88-percent had at least one high-risk cytogenetic abnormality, although that included a gain of 1q getting to toxicity, just focusing on the main toxicities - which were primarily cytokine release syndrome and neurotoxin.

The CRS was seen in 76 percent of patients, though all but one of these was grade one or grade two. CRS occurred rapidly. The median time to onset was about 6 to 12 hours and generally resolved by the next day in most patients. Neurologic events were seen in 28 percent of patients. These were all grade one and grade two. All of these occurred during the time of CRS and again tended to resolve by that resolution of CRS. Tosalizumab was used in 25 percent of patients and steroids were given to 17 starting with the 3.6 milligrams step-up dose.

Once we hit this dose there was no further dose-dependent increase in the incidence or severity of CRS at target doses above 20 milligrams. It did effectively mitigate high-grade CRS with higher doses, and it's allowed us to continue to dose escalate. The majority of CRS events occur during cycle one predominantly with the cycle one day one dose a smaller proportion during day eight and then it's fairly rare thereafter and typically limited.

In terms of looking at efficacy 51 percent were efficacy of valuable there were no responses seen at doses of 10.8 milligrams or below in terms of the target dose. However, starting at 20 milligrams and higher, we started to see activity and in that cohort of the 34 patients treated with those target doses, 18 had an objective response. The VGPR we're seeing is 32 percent greater than CR and 18 percent of patients. These responses were seen in penta-drug-refractory patients, 7 out of 17, and in 5 out of 8 patients with prior anti-BCMA therapies treated at these doses including two of four with prior CAR T cells.

The median time for the first response was about a month. Interestingly, the response seemed to be independent of the intensity of FcRH5 expression on plasma cells, at least so far. Seven patients were valuable for MRD-negativity by next-gen sequencing, and six of seven of these were negative at a ten to the minus fifth level. Some dose dependence, as we're getting up to higher dose levels, 61 percent of patients have responded at the 90 and 132-milligram dose and escalation is ongoing.

I was asked to limit it just to three or four slides. I will mention that in terms of response durability, the follow-up is still relatively short, particularly at the higher dose levels where we're seeing more activity. I think the longest response to this cutoff was 16 months. But several of these responses are ongoing beyond six months. We will sort of seeing how it goes as we get the longer follow-up. This shows proof of principle that this is a viable target in multiple myeloma. We’ll see where this goes in terms of continuing escalation at the single-step dosing. We're also looking at a double step dose where two low doses are given to see if we can further decrease the incidence and severity of CRS.

Dr. Adam Cohen received his medical degree from the University of Pennsylvania, Philadelphia, where he also completed an internal medicine residency. He then completed a hematology/oncology fellowship, and was a research associate in the Laboratory of Tumor Immunology at Memorial Sloan-Kettering Cancer Center, New York. Dr. Cohen is currently an assistant professor, hematology/oncology division at Abramson Cancer Center of the University of Pennsylvania, Philadelphia.

Top Myeloma Takeaways From the 2020 American Society of Hematology Meeting