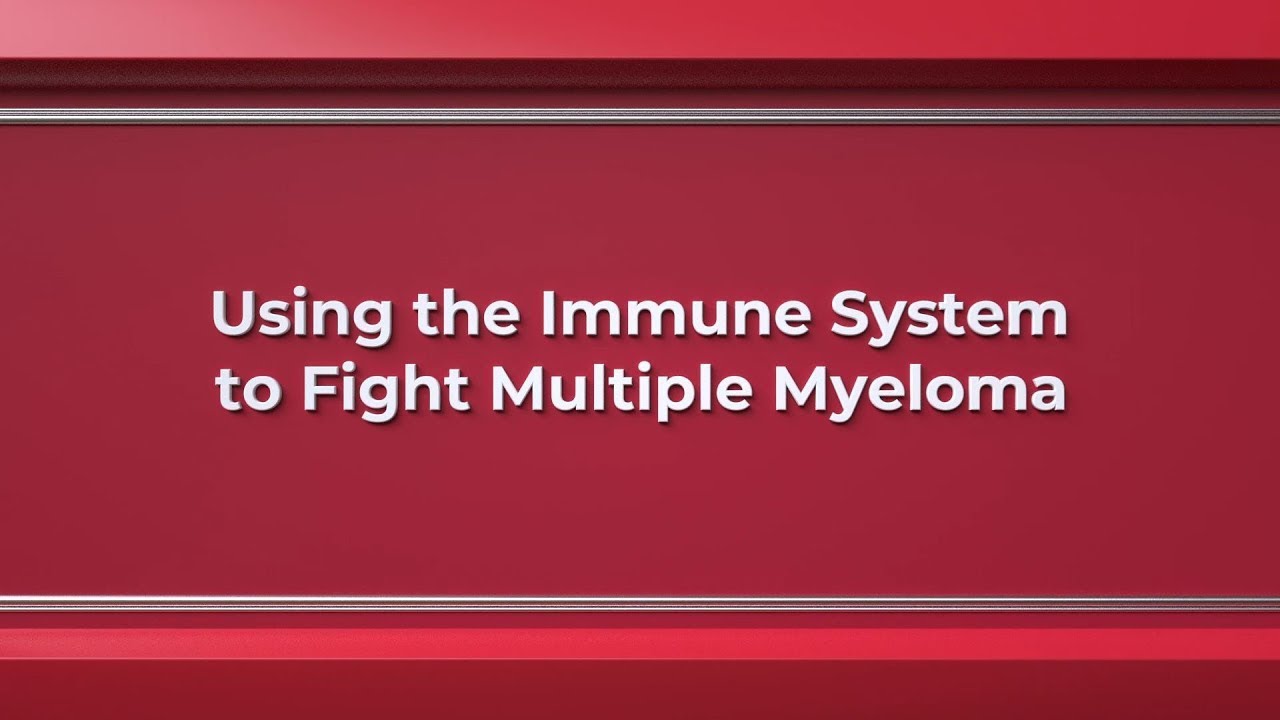 How the Immune System Can Be Used To Fight Myeloma

In particular, he explains that BCMA is found on the surface of myeloma cells and thus makes an excellent target for treatment. We have three available approaches for targeting BCMA in order to treat myeloma: through an antibody drug conjugate, through CAR-T cell therapy, and through bispecific therapy.

We know that multiple myeloma is a very complicated disease and it has to be approached in multiple ways to really help destroy it. One of the things that we have learned over our years of caring for myeloma patients and studying this disease is that the plasma cells themselves have little things that stick out of them. That can serve as literally a hook to grab onto, to help destroy the cell.

An ideal target is one that's expressed, or that is present, on the myeloma cell, but not on the good cells around it. And that's one of the attractive features of BCMA is that we know it is very heavily expressed in cancer cells, and, the plasma cells that have become cancerous in myeloma but not so much the other good cells. So it allows us to target the bad cells without having to hit the good ones with the different treatments that we use.

BCMA is a very special target on myeloma cells. Many targets that we try to hook onto, once we've treated someone with a drug that uses that target, the target disappears. But one of the benefits of BCMA is it stays preserved, which allows us with time to use one kind of BCMA drug and then use another BCMA drug, and maybe even a third one with time, because of the preservation of the BCMA on the outside of the myeloma cell.

Blenrep was approved by the FDA in August of 2020 to be used in patients who have relapsed multiple myeloma. The mechanism of belantamab mafodotin or Blenrep is really quite remarkable and unique. It really is in a sense two drugs in one. It's what we call a monoclonal antibody or a y-shaped drug that on the open side of the y it hooks on to the BCMA to trigger the immune system to destroy the cell but it's sometimes called an antibody-drug conjugate because attached to that y, almost like a backpack, is a toxin that the drug, if you will, gets dropped into the cell. It not only hooks on to the tumor. It pulls out of its backpack this toxin and drops it into the tumor to help destroy the cell and that kind of combination approach is one of the reasons why belantamab mafodotin has been so effective in treating patients with relapsed multiple myeloma.

Classically myeloma drugs are approved in the very heavily pre-treated setting before they can be approved earlier in the disease course. Belantamab mafodotin or Blenrep was approved by the FDA for patients that essentially have what we sometimes call triple class refractory myeloma which means patients have had prior therapies that include a proteasome inhibitor an immunomodulatory drug and a monoclonal antibody. Those are the three major classes of drugs that we have now in myeloma. Belantamab mafodotin or Blenrep was approved by the FDA because the clinical trials that we conducted demonstrated that even though patients had been treated with all standard therapies for myeloma, this drug still could work.

In fact, it worked in about 31% of patients in what was called the DREAMM-2 clinical trial and that percentage is really quite high when we compare it to the other drugs that have improved in myeloma that typically have a response rate between 22 and 29 percent. Belantamab is quite attractive because it's just an iv infusion over 30 minutes that are given quite smoothly with no infusional reactions once every three weeks. Generally speaking, it's tolerated quite well although patients can experience blurriness of vision and dry eyes and therefore all patients have to participate in a program where they're seen by an eye specialist before each treatment to ensure that we can monitor any changes in the eye and in particular the cornea -the outside of the eye.

So the second way in which we now leverage BCMA is through CAR T-cell therapy. Car T-cell therapy is an amazing form of treatment that we already use actually in lymphoma and leukemia. It stands for Chimeric Antigen Receptor T-Cell Therapy. And that sounds complicated, but let me try to explain it. So we have these T cells in our body that are part of our white cell system that are kind of like the soldiers and the defenders of our body that are trained to be able to fight. And so I can take from a patient a number of their T cells and a sample of their tumor and literally train the T cell to know how to recognize that tumor. We put literally a receptor on the T Cell that will find the tumor, and that's why it's called a Chimeric Antigen Receptor.

We take these T cells, as I say, out, we give them the receptors, we multiply them in the lab, and then we give them back to the patient. It really sounds almost so futuristic like we're watching a sci-fi movie. But this is really what we're able to do now with medical technology so that we can very specifically use someone's own immune system to destroy their own tumor.

The process of CAR T-cell therapy then is that a patient has to undergo what we call apheresis or collection of their T cells. They get hooked up to a machine that looks a little bit like a dialysis machine. And their blood goes out and we collect those T cells and then we go through the manufacturing process of making sure that we can teach them to understand their tumor and to multiply them. And then we give them back to the patient thereafter so that the tumor can be destroyed.

There are almost innumerable trials going on now for multiple myeloma with CAR T-cell therapy, of which the most advanced is the KarMMA trial. The product here is called ide-cel, and this is a therapy that we've known for the last few years that even in patients who have been very heavily pretreated, have basically seen all that's available to them in multiple myeloma, that they have response rates of over 70%. That on average patients remain in remission for over 9 months and in some cases well over a year. We now see multiple other agents coming to clinical trials for CAR T-cell therapy in multiple myeloma.

The majority of them right now are targeting BCMA, but there are newer targets also being developed. And one of the encouraging features we've seen as we have been using CAR T-cell therapy more in myeloma, not only are we seeing it is very effective, we are indeed seeing it be safer. One of the potential risks of CAR T-cell therapy and indeed bispecific therapy is this notion of cytokine release syndrome. And it is a situation where the body is reacting to these T cells that have been engaged in trying to take down the tumor.

Thankfully as we've come to understand CRS, as we call it, more effectively, we've been able to prevent it in most patients, or if it does occur that we've had it at a much less severe state. But it is something that requires careful monitoring over the first day or two when patients receive this therapy. We understand better the side effects that can come from the strategy and we try to prevent them with different drugs and different approaches that we have so that this can be more sustainable in the long term. But there is such enthusiasm about the strategy that I do think it will have a prolific impact on the way we treat patients with myeloma.

The third way that we can target BCMA and now indeed even new targets is this concept of bi-specific therapies. So bi-specific therapies are drugs that we give to patients that do two things at the same time. That's why they're called bi-specifics. Think of it as a drug that has two hands to it. With one hand it hooks onto the tumor, usually through BCMA, although we're seeing multiple other targets now being developed.

With the second hand, it reaches out to a local T cell and engages that T cell into the tumor so that it can help destroy the tumor. So it's kind of like what we do with CAR T-cell therapy but a much-simplified version. Instead of taking T cells out of patients and manufacturing them and training them and giving them back, because T cells are circulating in the body, this drug just pulls, a local T cell right into the equation, as it were, to try and help destroy the tumor.

We sometimes call these T-cell engagers. But these bi-specific drugs have really been a major advance in what we do in multiple myeloma. We expect with the time that there are gonna be some patients who will not have CAR T-cell available to them. They may not be able to undergo the process of the T-cell collection and manufacturing and re-infusion.

This is kind of an off-the-shelf approach where with a single drug we're leveraging someone's T cells but without all the need of the collection. And so the data for our bi-specific therapies is really becoming quite exciting and we're seeing remarkable response rates. There is still a risk of cytokine release syndrome as we see with CAR T-cell therapy but seems to be considerably blunted. I can see a day in the future where we will be able to use bi-specific therapy very easily in the community without having to go through the process of a T cell collection.

So we've seen today that there are three different ways to approach BCMA: through an antibody-drug conjugate, through CAR-T therapy, and indeed through bispecific therapy. But as we look to the future of myeloma I don t think it's gonna be one or two of the three, it'll be all three of them. We're gonna have the opportunity to match the right treatment to the right patient. Some patients may receive CAR T-cell therapy. A different patient may receive bi-specific therapy and indeed as we've seen because of the way BCMA works, patients can actually receive more than one of these treatments over time.

I always say I don t treat myeloma, I treat people. And we want every patient to feel empowered to know that the very best treatment for them is available to them. as we look to the future of myeloma I don’t think it's gonna be one or two of the three, it'll be all three of them. We're gonna have the opportunity to match the right treatment to the right patient. Some patients may receive CAR T-cell therapy.

A different patient may receive bi-specific therapy and indeed as we've seen because of the way BCMA works, patients can actually receive more than one of these treatments over time. I always say I don t treat myeloma, I treat people. And we want every patient to feel empowered to know that the very best treatment for them is available to them. 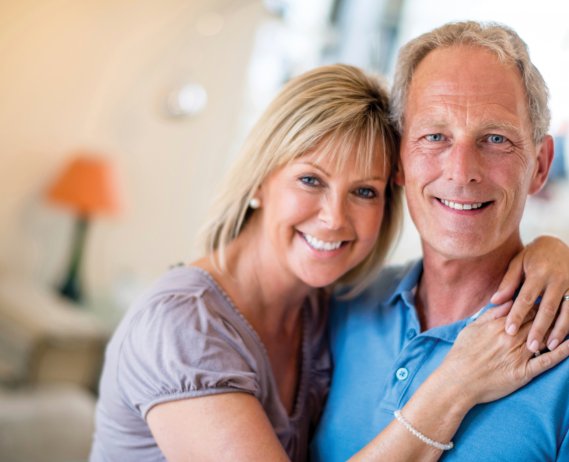 How does myeloma affect the immune system?