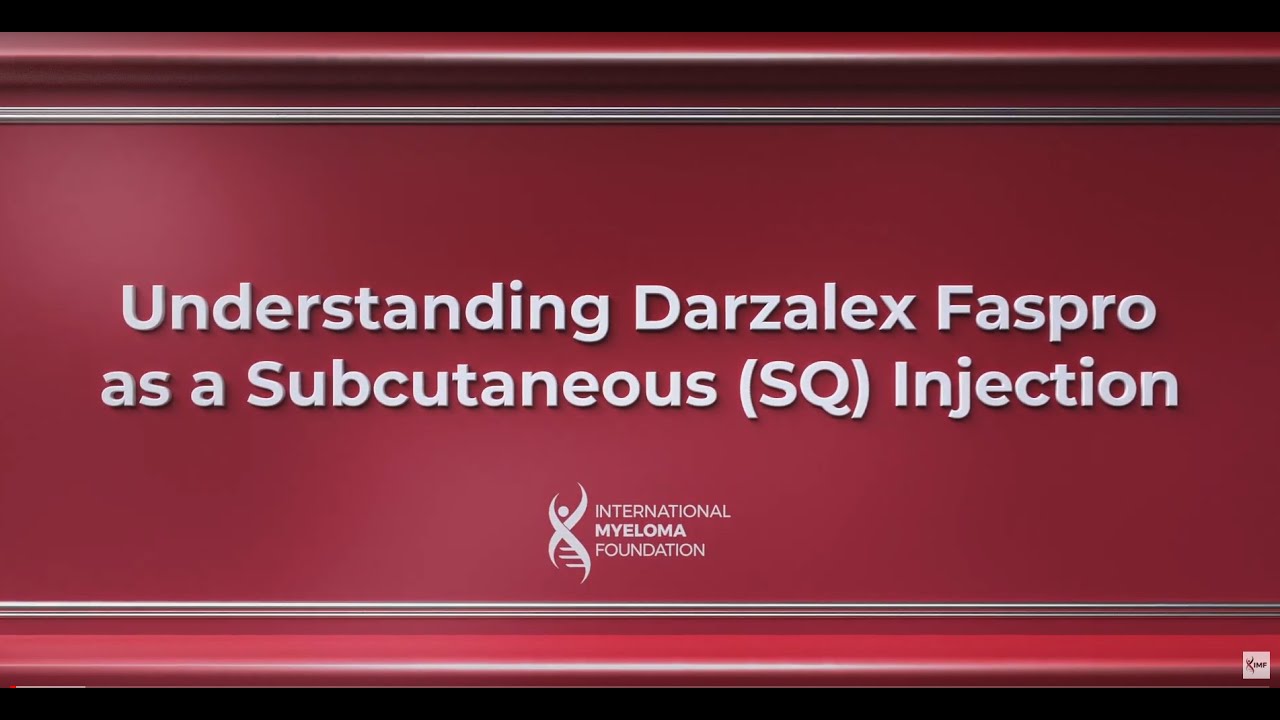 Darzalex Faspro Is the Subcutaneous Version of the Drug Darzalex

How Darzalex Faspro can improve the quality of life for patients living with multiple myeloma.

The video covers the drug's subcutaneous administration, its benefits, and its potential side effects. Myeloma patients who have undergone this treatment discuss quality of life benefits they have experienced with Darzalex Faspro®.

Voiceover: Darzalex Faspro is a groundbreaking drug for the treatment of multiple myeloma, helping improve the quality of life for patients and their families.

Jim Mahoney: Having Darzalex subq is a blessing. It gives you a lift. I don't feel like I'm ill.

Janet Kerrigan: It gives me a lot more freedom, and also, I don't feel so much like the patient.

Kimberly Noonan: Darzalex Faspro offers our ability to create an optimal quality of life for patients with multiple myeloma.

Voiceover: Multiple myeloma is a blood cancer that affects the bone marrow. More than 160,000 Americans are currently diagnosed with this disease.

Voiceover: Darzalex Faspro is an immunotherapy. That means it sends signals to the patient's immune system to directly kill multiple myeloma cells.

Dr. Joseph Mikhael: Darzalex Faspro is the subcutaneous version of the drug we have been using for many years: Darzalex, also known as daratumumab. This is a drug that targets a certain feature on the outside of a myeloma cell called CD38, and it hooks on to that CD38 and triggers the immune system to help destroy the cell. It's a little bit like a silver bullet where it can go and hit the myeloma cells but preserve the other good cells.

Voiceover: Jim Mahoney was diagnosed with multiple myeloma in 2005.

Jim Mahoney: The doctor told me it was multiple myeloma. I knew what that was. I also knew that it wasn't a curable disease. I thought my life was over.

Voiceover: Jim loved the busy life he led. Raising three children with his wife Lisa while pursuing a demanding career as an executive at a waste management company.

Jim Mahoney: I was very active. I was doing very well as a national account manager, and every weekend from the fall through the spring there were play rehearsals and all sorts of practices with the kids. We lived a very active lifestyle.

Voiceover: Thanks to a successful course of treatment, Jim's myeloma went into remission. In 2019 the disease returned and his doctors turned to Darzalex.

Jim Mahoney: My first experience with Darzalex was the infusion, which was the eight hours in the chair.

Voiceover: Jim was relieved that Darzalex was effective at treating his myeloma, but the day-long infusions took a toll.

Jim Mahoney: It is a full-day commitment.

Voiceover: When Darzalex became available as a subcutaneous injection, Jim did not hesitate.;

Jim Mahoney: The doctor said it's about a five-minute injection in your stomach and you'll be on your way. Having Darzalex subq is a blessing. It was a dream.

Lisa Mahoney: The subcutaneous has allowed him to maintain a more active lifestyle and do the things that he wants to do.

Kimberly Noonan: Patients can say that when they're not at the clinic, they can almost forget that they have multiple myeloma. That's really what we want. We want patients to have an optimal quality of life outside of the treatment that they endure for multiple myeloma.

Dr. Joseph Mikhael: Darzalex Faspro is administered into the skin of a patient, typically around the belly where it is a smaller needle that we insert. The infusion of the drug takes around five minutes.

Voiceover: Another key benefit of Darzalex Faspro is that patients don't have to have painful intravenous infusions.

Kimberly Noonan: Veins sort of have their shelf life. Over time it's a little bit more difficult to find that vein.

Voiceover: That was the case with Janet Kerrigan. She was relieved to have a quick subq injection instead of a time-consuming infusion to treat her myeloma.

Janet Kerrigan: It can be painful especially if they have to do three, four, five sticks to get intravenous going. The good thing with the Darzalex Faspro that I'm on right now, the injection itself, I don't find painful. It's a quick little zap that may be between a bee sting and a mosquito bite. They clean the site, inject the medication slowly and talk to me, and put a band-aid on and I have to sit there for another 20 minutes. They take my blood pressure again and then off I go.

Voiceover: Darzalex Faspro was Janet's fourth line of treatment. A former nurse, she was amazed at how few side effects, if any, she had.

Janet Kerrigan: I just had some shortness of breath and that was it.

Voiceover: Another benefit of Darzalex Faspro are the minimal side effects.

Dr. Joseph Mikhael: One of the real benefits of Darzalex Faspro is that as we're able to give the drug subcutaneously in the skin over that short period the number of infusional reactions has dramatically been reduced.

Kimberly Noonan: Patients ask a lot of questions about Darzalex Faspro. As Darzalex Faspro is injected into the abdomen, am I going to have complications related to that? You might have some redness at that site but you know it's very well tolerated.

Dr. Joseph Mikhael: It's always important for patients to talk to their care providers about any evidence of an infection, fever, cough, shortness of breath, those kinds of things. We do see a, thankfully, not very large increase, but an increase in infections. Once the body adjusts to Darzalex Faspro, it's very easy to administer and the body accepts it.

Kimberly Noonan: We're going to give Darzalex Faspro weekly for at least eight weeks. It depends upon what we're giving the Darzalex Faspro with. Then that is going to be given every other week for about a total of 24 weeks and then, with Darzalex Faspro as well as with IV Darzalex, you can go to monthly infusions if your disease is well managed.

Voiceover: Janet was diagnosed with myeloma in 2011.

Janet Kerrigan: When the doctor told me I have multiple myeloma.I just kind of turned my head from side to side and said you must be talking to somebody else. I'm never sick. I've never even had the flu.

Voiceover: Janet had lived an active life as a mother and full-time nurse. After her diagnosis, she researched the disease and focused on living life to the fullest.

Janet Kerrigan: I always have believed that when you're confronted with a problem you try to figure it out, you pull up your big girl pants, and you move on - you plow through it.

Voiceover: Thanks to the ease and convenience of taking Darzalex Faspro, Janet and her husband can now make the most of their retirement, enjoying each other's company and their family.

Janet Kerrigan: I tell this to my specialists all the time. I said it's a nuisance, but if I have to take the medication to get through the day, that's what I do.

Voiceover: Janet is grateful that she was a candidate for Darzalex Faspro. It is approved for people like Janet who have had one or more treatments for multiple myeloma, as well as newly diagnosed patients that cannot receive a transplant.

Dr. Joseph Mikhael: The indications of Darzalex are many and indeed now with Darzalex Faspro. We anticipate that we'll be able to use  Darzalex Faspro whenever we would have used Darzalex IV by itself.

Voiceover: Not only can Darzalex Faspro provide a better quality of life for patients like Janet and Jim, but studies have shown it is just as effective when given as a subq as through an IV.

Dr. Joseph Mikhael: Darzalex Faspro is a very effective drug. We've seen it used as a single agent by itself and in combination. The first thing to note is that it has paralleled the response rate and the efficacy that we've seen with the IV formulation.

Voiceover: Not only have studies shown Darzalex to be effective, but safe as well. Janet and Jim can't believe the difference Darzalex Subq has made in their lives.

Jim Mahoney: Being on Darzalex is great. The side effects aren't there. You feel normal again. I know that it's the right drug for me because it's working.

Janet Kerrigan: It gives me a lot more freedom as far as time. I don't feel so much like the patient.

Voiceover: And as support group leaders for the International Myeloma Foundation, they are committed to sharing their knowledge and optimistic outlook about the future with others.

Janet Kerrigan: My goal in life is to live, of course. My hope - my hope is for a cure.

What does the approval of Darzalex Faspro mean for myeloma patients?

Read more
Previous Post
How does the M-spike correlate to the amount of myeloma protein in the body?
Next Post
Webinar on How to Optimize and Protect your Immune System: A Nutrition Approach