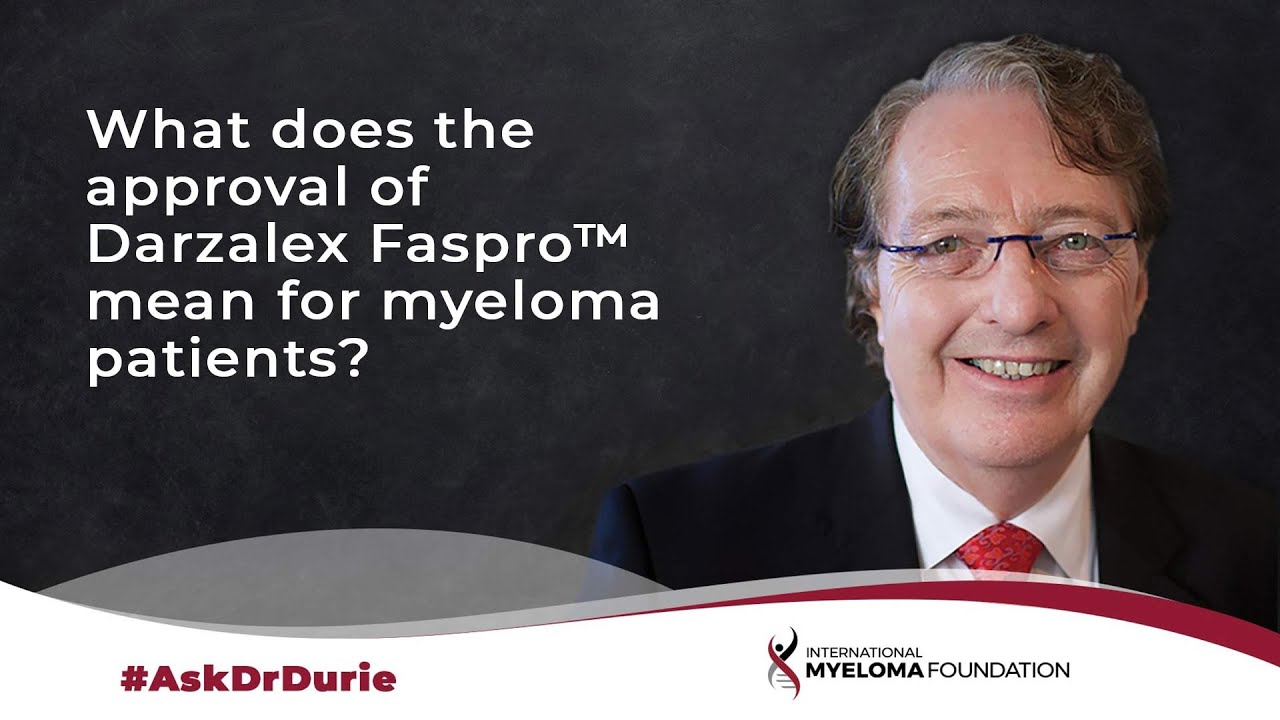 What does the approval of Darzalex Faspro mean for myeloma patients?

Darzalex Faspro is a subcutaneous monoclonal antibody approved to treat myeloma patients in both the frontline and relapse setting.

To reach the IMF InfoLine Coordinators, please call 800.452.2873 or email them at [email protected].

This week’s “Ask Dr. Durie” comes from a patient who’s heard about a recently new, recently approved a new drug called Faspro. What this gentleman is referring to is Darzalex Faspro®, which is an injection form of daratumumab, which is a monoclonal antibody against CD38, but It’s given in a form which can be given by subcutaneous injection verses intravenously.

What this gentleman is referring to is Darzalex Faspro®, which is an injection form of daratumumab, which is a monoclonal antibody against CD38, but It’s given in a form which can be given by subcutaneous injection verses intravenously.

And so, this is really an important new formulation. And so, this is a type of injection which can be given over three to five minutes. It’s typically given in the belly area, which is quite convenient. And so, being able to take a subq shot versus IV is a big advantage for a patient.

Now, this formulation has been approved both in the frontline setting and in relapse settings as part of different combinations. And so, this is quite helpful.

In studies that have been done this far, the benefit, the efficacy, the response rates, remissions, and survivals, have been excellent and equivalent, equal, even sometimes slightly better than with the intravenous root daratumumab. So, this is good news.

As far as side effects, one big advantage is that we don’t have problems with that first intravenous injection, which has been an issue with the IV formulation. In subcutaneous formulation, there have been some local reactions at the injection site. Eleven percent of patients did have some reaction, but none too severe, and reversible.

And so, BOTTOM LINE, this Faspro, the subcutaneous form of Darzalex® (daratumumab) is really an important and convenient new option that can be discussed with your doctor to see if it might be available in the setting that you need it and can become a convenient way forward.

What is the latest on the Black Swan Research Initiative?