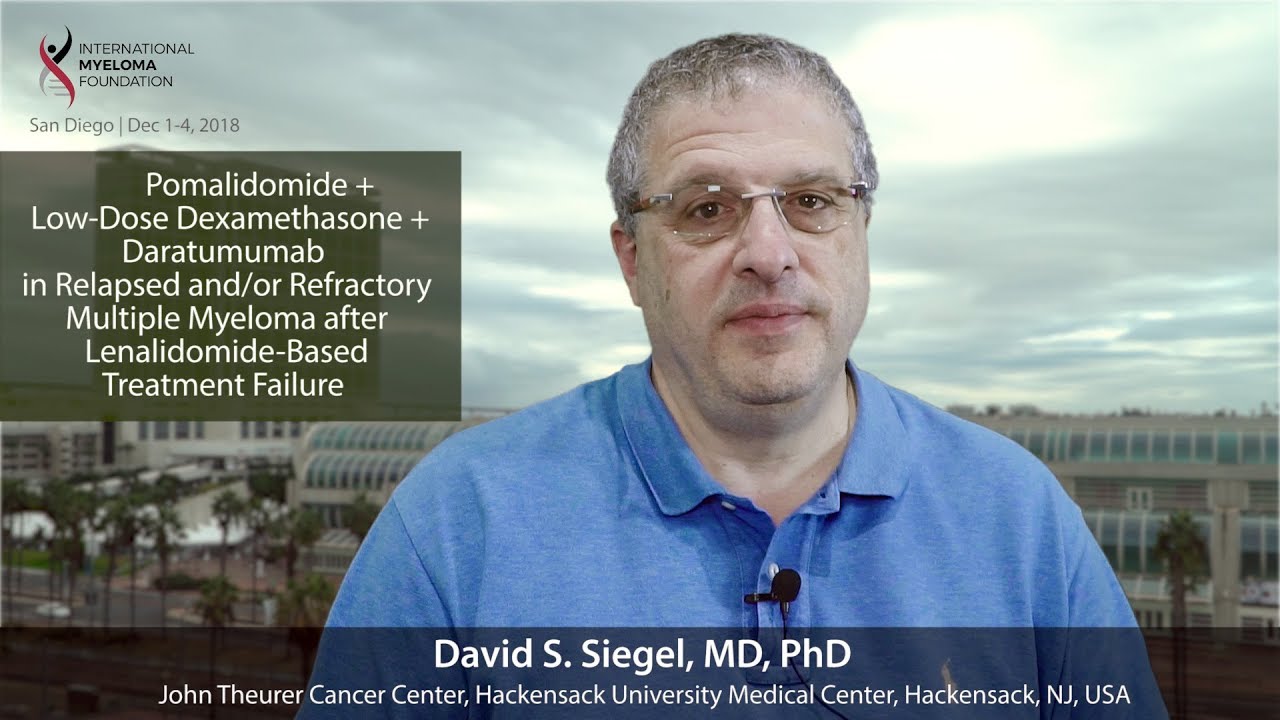 Lenalidomide (LEN) until progressive disease (PD) is an established treatment (Tx) in newly diagnosed and relapsed and/or refractory multiple myeloma (RRMM); thus, patients (pts) for whom the benefit of LEN has been exhausted are a clinically relevant population. However, LEN-refractory pts have typically been excluded from recent clinical trials investigating triplet regimens after ≤ 3 prior Tx lines. MM-014 (NCT01946477) is an ongoing phase 2 study that was designed to assess the safety and efficacy of pomalidomide (POM)-based Tx regimens in pts with RRMM and first- or second-line LEN Tx failure immediately before study entry. Earlier results from cohort A (POM + low-dose dexamethasone [LoDEX]) and cohort B (POM + LoDEX + daratumumab [DARA]) indicate that POM-based Tx is safe and effective in this setting. Here we report updated results from cohort B.

LEN-refractory pts with RRMM are in need of effective Tx options. MM-014 is the first prospective clinical trial to investigate a POM-based doublet or triplet regimen immediately after LEN-based Tx failure. In the context of a relatively short follow-up, the 9-mo PFS rate (86.3%) is promising. The ORR (77.7%) was higher than that previously reported with this triplet combination in heavily pre-treated pts with RRMM (≥ 2 prior lines [median, 4]; ORR, 60%), and the rate of grade 3/4 neutropenia in the present study was lower (61.6% vs 77%). These updated results from cohort B continue to demonstrate that POM + LoDEX + DARA is safe and effective following first- or second-line LEN-based Tx failure and further support earlier use of POM-based Tx in pts with RRMM

David S. Siegel, MD, PhD, is one of the nation’s foremost authorities on multiple myeloma. His research has almost exclusively focused on multiple myeloma, Waldenstrom’s macroglobulinemia, and AL amyloidosis, and has been published in many leading medical journals, including Nature, New England Journal of Medicine, Blood, and Journal of Clinical Oncology. Dr. Siegel is the founding Director of the Multiple Myeloma Institute. He has also led John Theurer Cancer Center’s development of a program to offer CAR T-cell therapy to patients with multiple myeloma. Visit Dr. David S. Siegel’s full biography.