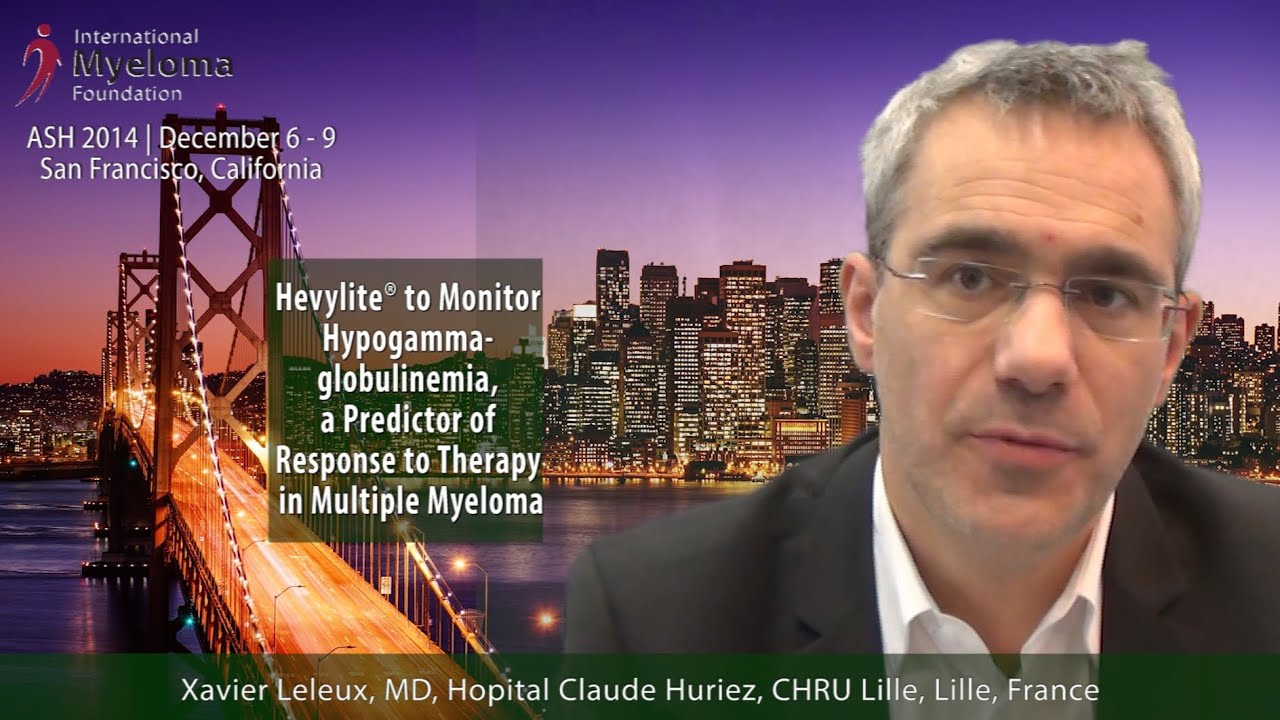 Dr. Xavier Leleu on using Hevylite to monitor hypogammaglobulinemia in myeloma at (ASH 2014)

Background. The depth of Hypogammaglobulinemia has been related to adverse prognosis in myeloma for decades, but most importantly, it has been suggested that its recovery following treatment was associated with good outcome and prolonged survival. However, none of the traditional techniques has allowed a precise measurement of isotype-matched (i.e. concentrations of IgGκ in an IgGλ myeloma patient) hypogammaglobulinemia. Recently, a new test quantifying paired clonal and non-clonal immunoglobulins (heavy/light chains HLC i.e. IgGκ/IgGλ) in serum was developed. Here we aim to assess the new HLC assays as tools to measure Hypogammaglobulinemia, and potentially replace traditional techniques for the monitoring of patients with myeloma.

Materials and methods. 107 (59 IgGκ, 29 IgGλ, 12 IgAκ, 7 IgAλ) myeloma patients treated with pomalidomide and dexamethasone in two IFM studies (IFM 2009-02 in end-stage RRMM, and IFM 2010-02 in del17p and t(4;14) RRMM ) were included. The criteria for selection were that patients had measurable intact immunoglobulin myeloma according to IMWG criteria (M spike ≥10g/L), using serum and/or urine protein electrophoresis, with exclusion of patients solely measurable on UPEP and sFLC. All sera were collected centrally before initiation of treatment and sequentially every cycle until progression. Hevylite® (HLC) was measured in the biology laboratory of CHRU of Lille (France). For each patient we have measured the clonal isotype HLC level, and the corresponding non-clonal paired isotype HLC level, e.g. for IgAκ myeloma, the IgAλ non-clonal paired isotype. (Normal ranges: IgGκ 3.84-12.07, IgGλ 1.91-6.74 and IgGκ/IgGλ 1.12-3.21; IgAκ 0.57-2.08, IgAλ 0.44-2.04 and IgAκ/IgAλ 0.78-1.94 g/L).

Conclusion. The mechanism of immunosuppression in myeloma patients is poorly understood. Here we have shown for the first time that isotype-matched hypogammaglobulinemia correlates to depth of response. Hypogammaglobulinemia is important to assess not only because of its greater risk of infectious complications, often severe in myeloma, but also as it plays a predictive role in occurrence of response and more importantly depth of response. Future studies are needed to unravel the relationship between debulking of tumor cells and correction of hypogammaglobulinemia; in other words, is repopulating of the marrow with normal B cells associated to better outcome, and how does this affect the homeostasis of the bone marrow in its ability to support tumour cells.

Dr. Xavier Leleu is the Head of the Myeloma Clinic and Head of the Department of Hematology at Hôpital La Mileterie, part of the academic hospital of Poitiers, France. He is actively involved in numerous national and international clinical trials as an investigator and coordinator. Dr. Leleu is a frequent speaker at national and international congresses and is a reviewer or a member of the editorial board of several hematology journals. He is actively involved in the Intergroupe Francophone du Myélome. 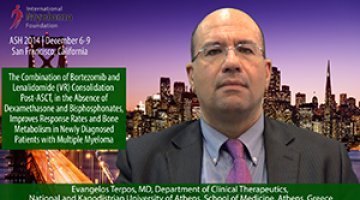