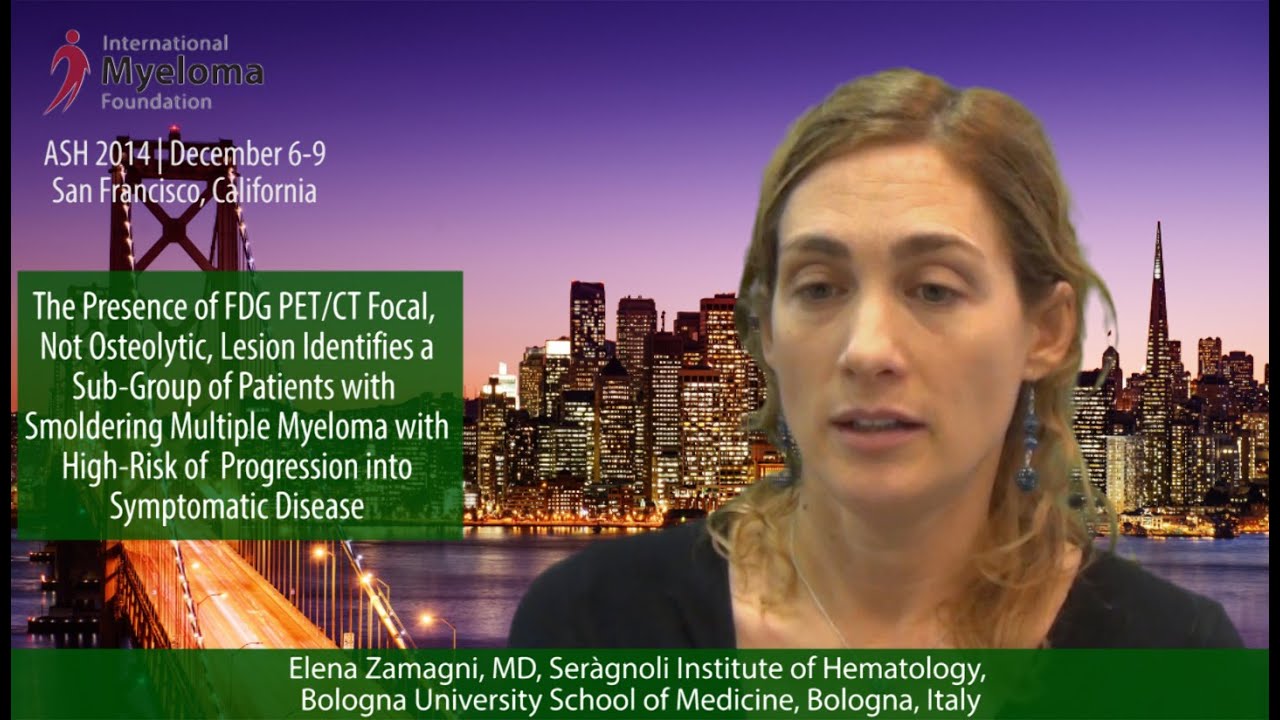 Dr. Elena Zamagni (Seràgnoli Institute of Hematology, Bologna University School of Medicine, Italy) discusses a study investigating the role of FDG PET/CT in smoldering multiple myeloma. In the study, the presence of an FDG PET/CT focal (not osteolytic) lesion or lesions identified a sub-group of patients with smoldering multiple myeloma with high-risk of progression into symptomatic disease. The study results were presented at the 56th American Society of Hematology (ASH) Annual Meeting. ASH 2014 abstract 3371.

Smoldering multiple myeloma (SMM) is an asymptomatic plasma cell disorder whose risk of progression to symptomatic MM (MM) is highly variable. Therefore, the identification of predictors of progression into MM is a relevant end point. Several markers (serum M protein, percentage of bone marrow plasma cells, free light chain, FLC, ratio, immunophenotyping of aberrant plasma cells and focal lesions, FLs  at MRI) have already been established to identify  sub-groups of SMM patients (pts) with a highest risk of progression into MM. Among imaging methods, FDG-PET/CT is a reliable technique for assessing early skeletal involvement and for predicting outcomes at the onset of  MM. However, no data are available regarding the impact of PET/CT FLs in SMM on time to progression (TTP) into symptomatic disease.

To address this issue, we prospectively studied pts with a suspected diagnosis of SMM with FDG-PET/CT. A cohort of 73 pts, with a median age of 61 years old (range 27-83) and a confirmed diagnosis of SMM, followed for a median of 2.2 years, is herein reported. By study design, all the pts were studied with PET/CT at baseline. Bone marrow involvement was described as negative, diffuse or focal. The number of  FLs, as well as size and associated standardized uptake values (SUV) were recorded. For each FL, the presence of eventual underlying osteolytic lesion  was investigated by the CT part of the scan; pts with osteolytic lesions were excluded from the present study, as they were considered as having symptomatic MM. Follow-up took place every 3-4 months and included clinical history, serum and urine markers and PET/CT plus axial MRI for occurrence of symptoms or an increase in M component. Progression to MM was defined by the presence of CRAB features. Skeletal progression was defined by the appearance of one or more sites of osteolytic bone destruction, pathological fractures and/or soft masses at PET/CT or MRI. The start of systemic therapy was defined as the date of event for the analysis of TTP.

In conclusion, approximately 10% of the pts with SMM have a positive PET/CT, mainly with few FLs, without underlying osteolytic lesion, with a low FDG uptake. PET/CT positivity significantly increased the risk of progression of SMM into active MM. PET/CT could become a new risk factor to define high risk SMM. A larger cohort of pts will be presented at the meeting. Further studies  are warranted to find and optimal cut off point of FLs to capture the higher risk of progression at 2 year and to merge with other prognostic factors.

Elena Zamagni MD, PhD, is an Assistant Professor of Hematology at the University of Bologna, Italy. She received her medical degree from the University of Bologna. She has published over 90 papers in peer-reviewed journals, mainly in the field of plasma cell dyscrasia. She is an active member of the board of the GIMEMA myeloma working party and she has cooperated in the Scientific secretary and as principal investigator in several national randomized trials in multiple myeloma. She is a member of the Italian Society of Haematology and of the International Myeloma Working Group. She is serving on the EHA’s Scientific Program Committee since 2017. Visit Dr. Elena Zamagni’s full biography.