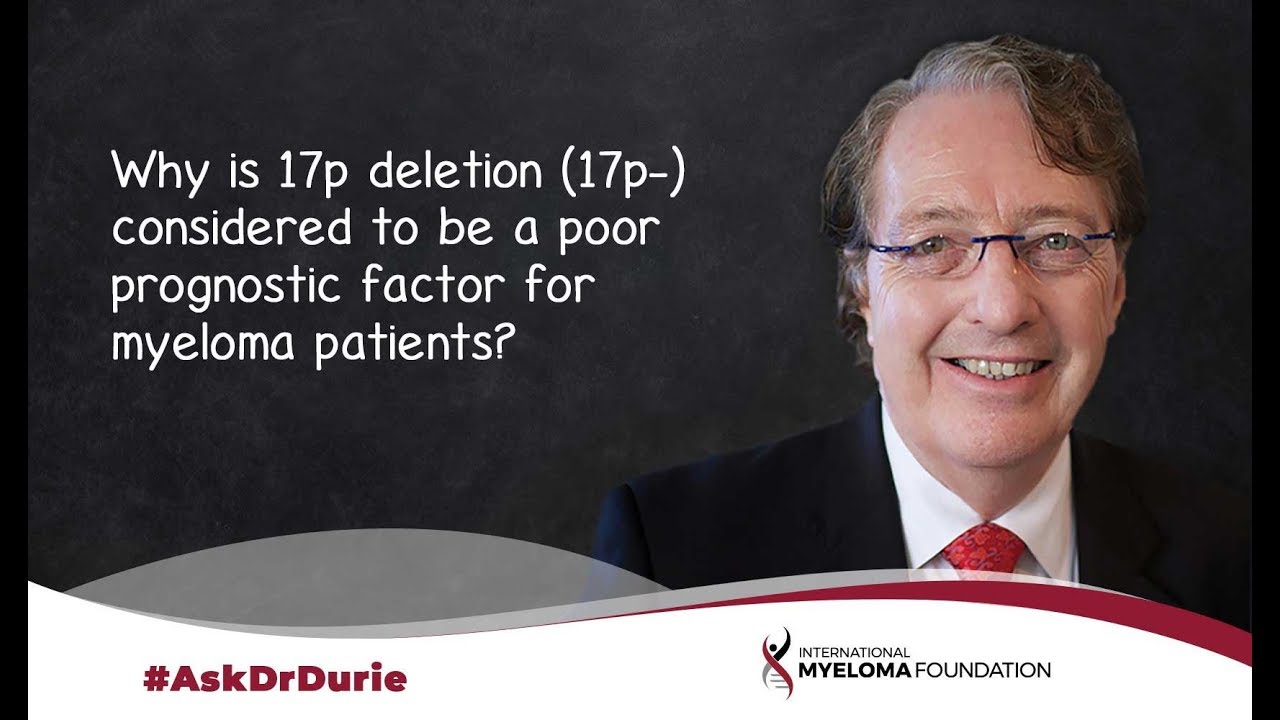 Why is 17p deletion (17p-) considered to be a poor prognostic factor for myeloma patients?

This week’s “Ask Dr. Durie” comes from a very careful patient and she wants to know, “What about 17p- as a poor prognostic factor?”  She’s heard that this is a poor risk-factor, but she’s also heard from patients who have been told that they have this and they seem to be doing rather well.

So, what is the explanation? The first thing I’ll say is that this is a really, really good question that does raise several important points about this chromosome testing.

So, first of all, 17p, this is an abnormality that is picked up on FiSH testing of bone marrow myeloma cells. And so, the bone marrow cells are taken and they are stained using Fluorescence in Situ Hybridization, so FiSH testing. And with this testing, the chromosomes show up with different colors. And when you look at the chromosomes and chromosome number 17, sometimes the top part of chromosome 17 is missing, and this is called 17p-. P is the top and q is the bottom, so p minus means that the top is missing.

So the next point is, why is that important? Well that top part of chromosome 17 includes something called p53, which is an anti-oncogene. And so, when this piece of the chromosome is there, it helps to shut down the development of chromosome damage in the cell. And so, when you remove that, when you lose that, there can be a buildup of chromosome damage in the cell which can make the cell more dangerous, more aggressive, and more difficult to be eradicated with treatment. And so this is a very, very important thing.

The next point is, how do we detect when there is a problem with this p53? So, on the FISH testing, you can see if it’s missing. But there are two chromosomes, so it can be missing on one of the pair or both of the pair so that there can be a single hit or a double hit when both are missing. But, an additional complication, is that the p53 could actually be there but it’s actually abnormal or mutated so that it’s not working. And this can only be picked up using special mutational sequence analysis.

And so, there can be confusion if it seems like the p is there but it’s actually abnormal and not working. And so, right away you can see that there could be some misclassification by looking for one chromosome, two chromosomes, maybe a chromosome that looks like it’s there but it’s really not working that well. And so, a lot of potential for confusion here.

And the third aspect of confusion can be that, “What is the percentage of the cells that need to be affected that we use to say that there is an absence of this 17p?” So, in the traditional classification, somewhere between seven and nine percent of the cells need to be affected with the 17p- to say that this is a result where a patient might have that abnormality. But you can see that this is something a little bit variable that maybe would depend on who’s reading the results and you know, “What if it’s six percent?,” and “Does it make a difference if it’s maybe a hundred percent, where all of the cells are affected?”

And so, the bottom line here is that this is a type of testing which is not really a secure testing. We do know that if this abnormality is present in a high percentage of cells, maybe fifty percent of the cells, and there’s a high percentage of plasma cells in the bone marrow, this is more of a dangerous situation where there may be a sharp remission, response to treatment is not as good, and it’s more difficult for relapsed therapies.

But, at a lower level, if perhaps only one of the chromosomes is affected, or it’s only a small percentage of the cells, this is where perhaps even regular treatment may be able to eradicate that small sub clone and the patient can do just fine. And so, this is why we see a variation in outcome for patients that have this 17p- abnormality.

And my personal recommendation is that we really need to be looking and moving forward to different types of methodology that will give us a more secure classification for poor- versus standard- risk disease. And so, we are working hard on that and several groups are looking at more routine mutation analysis tests that will allow us to better classify patients and give much more secure understanding and recommendations for our patients.

#AskDrDurie: How does the IMF contribute to the myeloma community?

Read more
Previous Post
Are there any updates about new drugs for myeloma patients?
Next Post
Developing the Spirit of a Myeloma Warrior and While Dancing