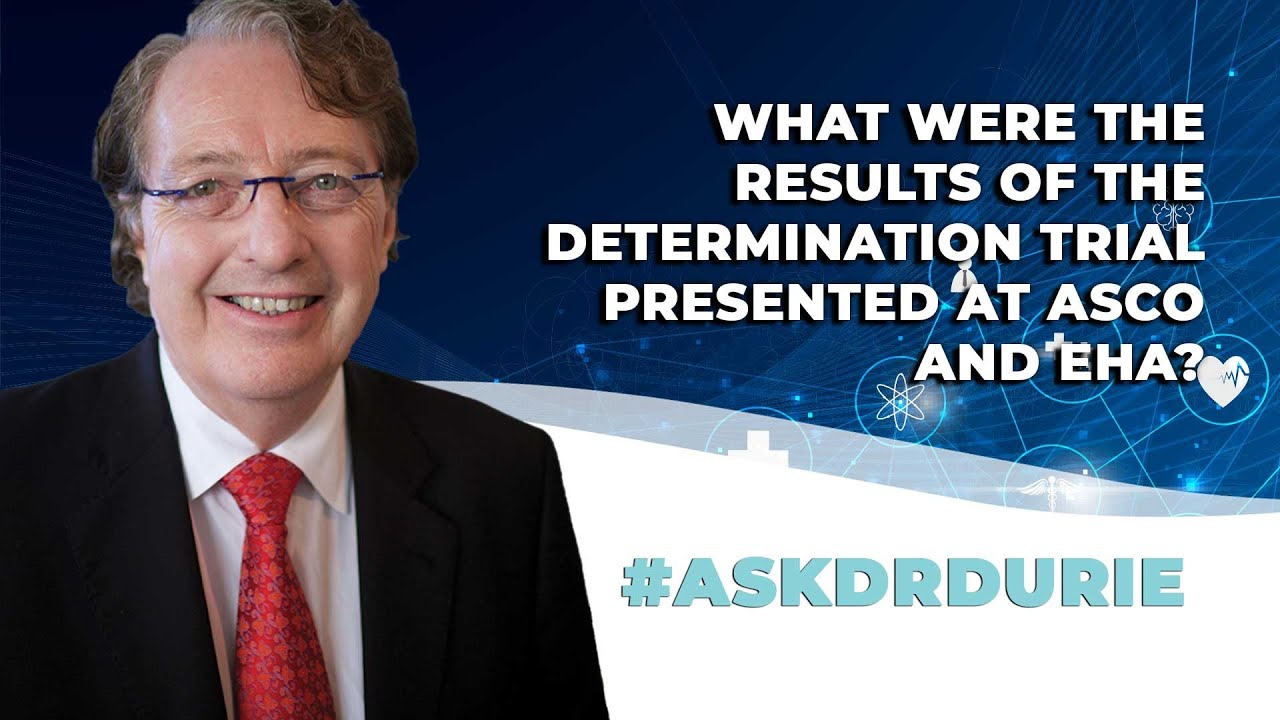 What were the results of the DETERMINATION Trial presented at ASCO and EHA?

Myeloma expert Dr. Brian G.M. Durie discusses the results from the DETERMINATION trial presented at the 2022 ASCO and EHA meetings and the role of early versus delayed autologous stem cell transplant (ASCT) in newly diagnosed myeloma.

The BOTTOM LINE: While a longer first remission is a clear benefit of early ASCT, overall survival did not change between early versus late ASCT.

This week's "Ask Dr. Durie" is in response to questions from many patients actually, who want to know the details of a trial called the DETERMINATION trial, which was presented at both the ASCO meeting in Chicago and also the EHA meeting in Vienna by Dr. Paul Richardson from the Dana-Farber. The results were also published simultaneously in the New England Journal of Medicine. So, you immediately have the impression that this is certainly an important trial, and people are very interested in the results.

The results are rather clear-cut. There is no doubt that the first remission, what's called the PFS, or progression-free survival, is significantly longer with the initial early autologous stem cell transplant over a year—longer—than the early autologous stem cell transplant versus not. However, there is significant caution because, at follow-up at five years, the overall survival is identical at around 80% in both arms. Now, as it turns out, these are the same results that came from an earlier French trial conducted by the IFM in which remission was prolonged, but overall survival in that particular study continues to be the same for both arms.

So, the bottom line is that this has reactivated the discussion about what the role of autologous stem cell transplant is as far as early treatment for myeloma. The longer remission is a clear benefit and is something favorable for the patient, but balanced against having to go through a rather rigorous procedure—although it has become safe and is now relatively inexpensive compared to many other treatments that we have to offer.

Nonetheless, the fact that it does not confer a longer-term survival benefit is a caution. And so, I think that most investigators are recommending that, particularly for younger patients, where we would normally be offering autologous stem cell transplant, that they sit down and have a shared decision discussion process with their treating doctor or doctors to see what is the best in the case for them that having that solid first remission for four—over four years, moving towards five years—is that something that they want to have or maybe defer that transplant on and look to possible benefit from the many other exciting therapies that are available?

And so, an unresolved question from the DETERMINATION trial. Although, clear response and remission benefit from the early introduction of the autologous stem cell.

Quality of life in pts with RRMM treated with pomalidamide and dexamethasone ± subcutaneous daratumumab: APOLLO