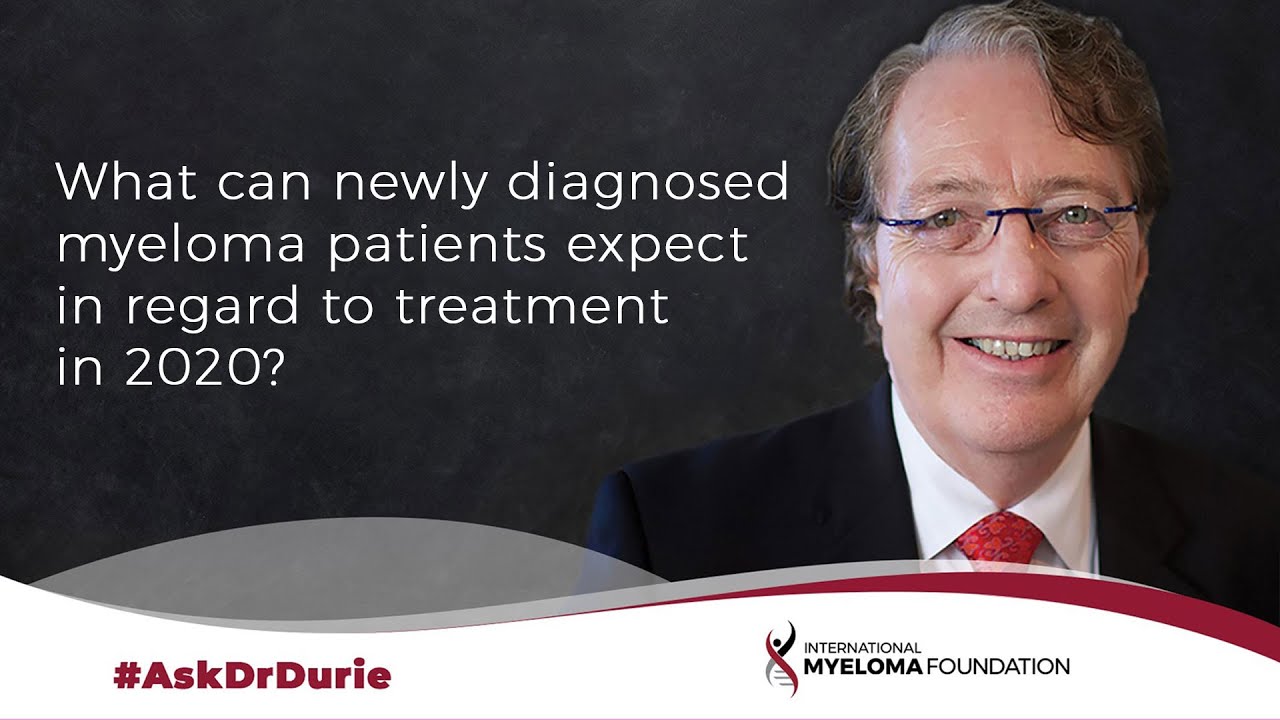 What can newly diagnosed myeloma patients expect in regard to treatment in 2020?

This weeks’ “Ask Dr. Durie” comes from a lady who was diagnosed about seven or eight months ago and has been looking at all of the great news about new treatments for myeloma and wondering what her personal expectations should be with her treatment.

When she was diagnosed, she received initial treatment with the combination of Velcade®, Revlimid®, and dex, which is really a standard option these days. And then, she had gone through and autologous stem cell transplant. She had done extremely well with that and is in an excellent remission. Thought, I think what prompted this question, is that there’s still a small amount of myeloma protein in the blood. And so, she’s had what would be considered a really, really, excellent, very good, partial remission.

And so, this is, this is an excellent response. And so, if we look at the results from different trials, for example, the SWOG 777 trial, which is one that I conducted on the behalf of SWOG, or the French trial, the IFM 2009 trial, a patient who has at least a very good partial remission, where the protein level has dropped by at least 90-percent, these patients are likely to be in remission for at least four or five years, and these days can expect to have a survival, an overall survival in excess of seven years. So, compared to years ago, the initial expectation is really quite reasonable.

But the additional question posed by this lady is, “Here in 2020, what can I expect?” And, this really is a very important perspective, because, right now, because we have so many new drugs. We have new drugs that have been approved, pomalidomide, carfilzomib, ixazomib, panobinostat, we have daratumumab, a new monoclonal antibody, we have selinexor, we have all of these new things which have been approved. And then we have all of the new immune therapies, CAR T cells, the t-cell engagers, the monoclonal antibody drug conjugates, and a number of other drugs in development.

And so, what this means for a patient diagnosed right now, is not only can that first remission be expected to be quite long, and a matter of five years, in a range of about five years, but beyond that, all of these agents will tack onto that a significant number of additional years. And so, it’s not unreasonable for a newly diagnosed patient who’s doing well, to have an expectation in the ten-year range, that would be their survival.  And, right now, I have patients doing well in remission way beyond that ten-year mark.

And so, a very, very important, broad BOTTOM LINE here is that, newly diagnosed patients right now receiving initial triple therapy and a stem cell transplant, with all of the back-up options available, can have a very high expectation of doing well. And so, this long survival has gone from something that might have been considered exceptional in the past, to know something that we can really expect with some degree of security, so a much more positive outlook in 2020 verses five, ten, or certainly, fifteen years ago.