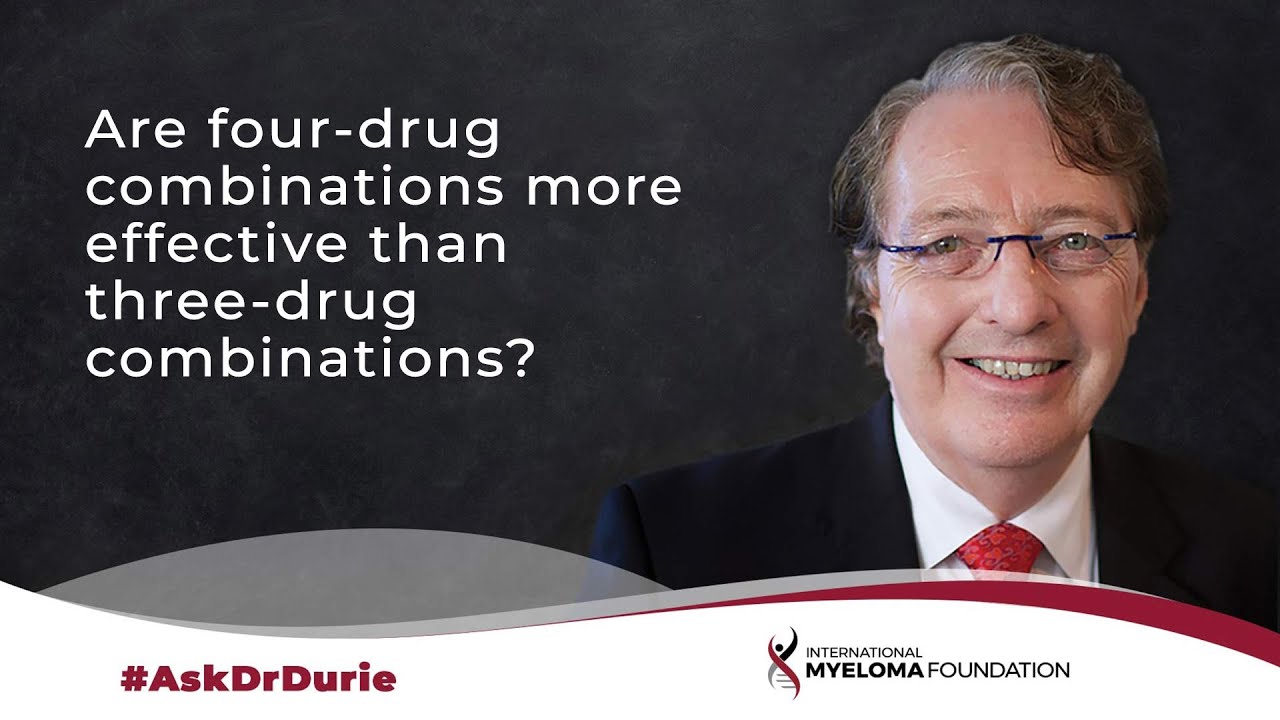 In this episode, Dr. Brian G.M. Durie discusses if the use of four drugs in a treatment regimen can benefit myeloma patients.

Initial results from the GRIFFIN and ASCENT trials show improved responses, remissions, and early survival using a quadruplet regimen. Discuss with your doctor to see if a four-drug combination is appropriate for you.

To reach the IMF InfoLine Coordinators, please call 800.452.2873 or email them at [email protected].

This week’s “Ask Dr. Durie” comes from a lady who has been watching all of the different protocol trial results and wants to know whether a four-drug combination, a quadruplet as we call them, is recommended versus a triplet, a three-drug regimen.

And so, this is increasingly a common question. We have just experienced the trial results which indicate that three drugs, the triplet, are better than a doublet. And so, we’ve learned for example, in the frontline setting, the newly diagnosed setting, that taking Velcade®, Revlimid®, and dex, the triplet is better than just using a doublet provided that the use of the triplet is feasible related to the status of the patient.

And so, now, moving forward, we have quite a bit of data comparing quadruplets versus triplets. And, in this setting, for example, adding in daratumumab. So, daratumumab, Velcade, Revlimid, and dex, versus Velcade, Revlimid, and dex. And so, we have the results of the GRIFFIN trial, which showed in the early data that the responses, the remissions, and early survival are definitely improved with the four-drug regimen versus the three-drug regimen. And we’ve seen it with other regimens where isatuximab has been used, and where VTd has been used, rather than VRd. And so, we have quite a bit of data indicating both in the frontline setting, as well as later on in the disease course, that four drugs can be quite helpful.

And so, what is the status of recommendations? Well, right now, using the four-drug, the quadruplet, is not yet a standard of care. However, many myeloma experts and local doctors do look closely at the situation, and particularly, for a patient who has a more aggressive disease, a high-risk disease, or if there is an attempt to achieve a particularly good response. For example, within the context of what we call “cure trials,” where the ASCENT cure trial is ongoing in the U.S., which is daratumumab, Kyprolis®, Revlimid, and dex. So, in this setting, you may want to use that quadruplet to get the best response possible.

And so, the BOTTOM LINE right now is the data are good, very encouraging with the four-drug combos. Certainly, something to discuss with your doctor to see if it is or is not appropriate. However, it’s always important to realize that this is one extra drug, additional toxicity, and cost. And so, we are anticipating that access issues and cost issues will become much more important as we look at using a four-drug combination versus a triplet. But, clearly, there can be an early benefit and improved outcomes. 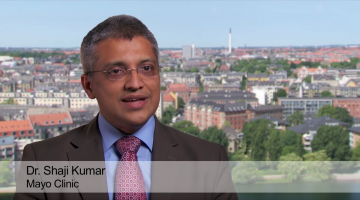 ASH 2019
Read more
Previous Post
What should myeloma patients do when a low level of myeloma protein remains detectable?
Next Post
When patients test as having borderline high-risk smoldering myeloma, should they receive treatment?