“After assisting hundreds of IMF members with their fundraising proj­ects over the course of my many years with the Foundation, I continue to be inspired by the ingenuity and dedication of the families I work with,” says Suzanne Battaglia, Director of Member Events for the IMF. “Justin McWethy’s month-long public awareness campaign plus a day of river­bank cleanup in his community of Yosemite is an excellent example of a unique event that reflects the interests of the IMFer who organized it.”

Justin McWethy’s mother was diagnosed with multiple myeloma in May 2012. Three years earlier, Tamyr McWethy was told she had osteoporosis, but treatment failed to alleviate her symptoms. No blood tests were performed until Tamyr’s kidneys failed. Diagnostic testing revealed Stage III myeloma. 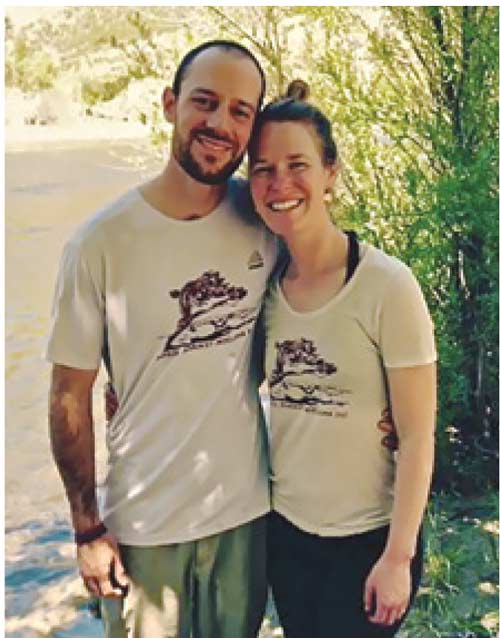 “Our family has always been very close and very spiritual, and this is the hardest thing we’ve gone through,” says Justin. “My Mom retired after a 25-year career as a nurse and my Dad, Bill, is a retired Navy officer. But while they still live in Virginia, I now live across the country in Wash­ington State and my younger sister lives in Ohio. My sister and I wanted to drop everything and come home as soon as we heard about the cancer diagnosis, but we had to respect our parents’ wishes. It was hard for us to stay away; we so much wanted to help.”

Justin educated himself about the basics of myeloma and closely followed every step of his mother’s recovery. “It is a miracle that my Mom was able to get off dialysis in July and responded so well to anti-myeloma therapy that she achieved remission by September. After a two-year remission, she underwent a stem cell transplant and is in remission once again.”

Justin has been a teacher since graduating col­lege in 2005, and cur­rently works in Yosemite National Park teaching Environmental Science. He wanted to find a way to honor his mother while benefiting his local community through the work that is both his professional focus and his personal commitment. “But I’ve never before spearheaded a public awareness campaign or a fundraiser! I didn’t know what to do. However, once I spoke with IMF’s Suzanne Battaglia, my concept crystalized.”

Justin’s March Against Myeloma was a month-long awareness campaign that culminated on May 2nd with a stewardship project of a riverbank cleanup followed by a BBQ and family-friendly games. Lots of people got involved and about 40 of Justin’s local supporters rolled up their sleeves to restore a vandalized camping site at the Merced River Recreation Area in Briceburg, bordering Yosemite National Park.

Ilana Kenville, IMF’s Member Events Associate, attended the riverbank cleanup with her husband and seven-year-old son. “It was a truly inspir­ing, feel-good day for everyone. Justin and his fiancée Sal, along with all their friends, are amazing! They did an awesome job. It was a day my family will never forget.”

Raising funds was not necessarily Justin’s focus. “I thought of March Against Myeloma more in terms of a celebration of the patients who are in a fight for their lives. But in the end we raised over $13,000 to benefit the IMF, and I am so grateful and humbled by the involve­ment and generosity of all the participants.”

Three years after Tamyr’s diagnosis, the McWethy Family is closer than ever. And they are now con­nected to a larger family – a myeloma support group in Virginia, the IMF Family, and the myeloma commu­nity at large. MT