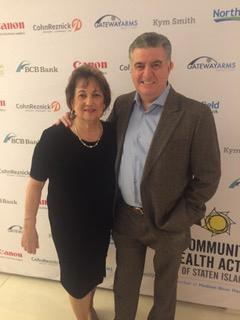 Charlie and I were married in April 1971, 50 years ago.  The interesting thing about Charlie is that he has never been sick….and when I say that I mean, all these years, rarely a sniffle, cold, or flu.  Even when our children were small, I was always the one who got sick with germs they brought home from school.  We used to joke about his being so healthy.

Being very health conscious, Charlie would always be sure to take good care of himself, exercising, keeping his weight down and going for his annual check- up which included blood work.  So you can just imagine that in January of 2010 when he went for his blood work/checking his cholesterol, etc. and the doctor called, alarms went off.  Our internist Dr. Gecht reported that the protein level in his blood was rather high and he wanted him to check into it further.  “Not to worry” he said it was probably nothing.  However, when the Nalitt Cancer Institute here in Staten Island sent him a large manila envelope with forms to be completed prior to his appointment, he panicked.  I tried to remain calm.

After meeting with the cancer doctor who did more extensive blood work and a bone marrow biopsy, it was revealed that he had Multiple Myeloma, smoldering stage.  We had never heard of this disease and were stunned.   The doctor suggested that we make an appointment with a Myeloma specialist, as there was none here in our hometown of Staten Island, New York.  So he recommended Dr. Jagannath at Mt. Sinai Hospital in NYC.  He had worked with Dr. Jagannath before at M.D. Anderson in Texas.  On our first visit, he confirmed the smoldering stage and said no treatment was necessary at this point in time.  Whew, that was a relief, even if we didn’t quite understand all of this!

Two appointments later, Charlie was complaining of back pain. Dr. Jagannath then requested a Cat Scan which showed that he had a collapsed vertebrae in his back, #9.  The decision was made that he would now begin treatment as the myeloma had caused the back pain and damage to his vertebrae.  A course of Revlimid, Velcade and Dex was used for four months which put Charlie into remission.  He did however develop neuropathy in his feet and the Velcade was discontinued after the second cycle.  Next he began the harvesting of his stem cells which would be used for the scheduled stem cell transplant.  As a result of the chemotherapy treatment, he had to leave his job due to the fact that he traveled the northeast region as a sales representative for a men’s footwear manufacturer out of Spain and he was too fatigued doing all that driving and carrying heavy cases of samples.

So, prior to St. Patrick’s Day, March 16, Charlie entered the hospital for a 15 day stay.   The hardest part I would say for him was the confinement and the loss of his glorious head of hair! The transplant team at Mt. Sinai were terrific. Charlie did extremely well and the result was a stringent complete response.

Charlie has enjoyed 7 years of remission with no drugs.  He relapsed in 2019 and is currently receiving treatment that has resulted in remission once again.  He is enjoying life and optimistic about he future.  We will be celebrating our 50th wedding anniversary this year!