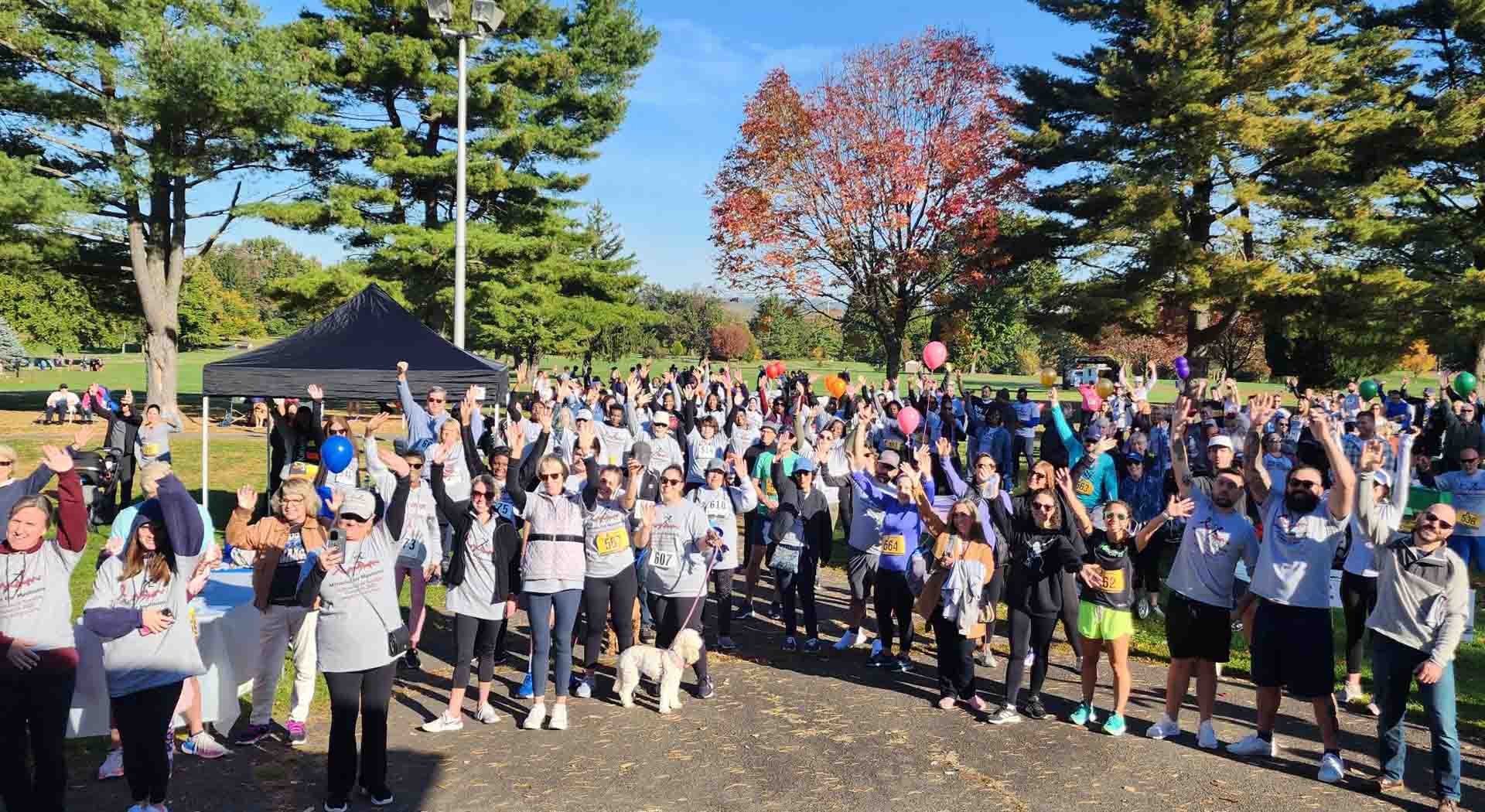 One of the longest running 5K run/walk fundraisers in support of the International Myeloma Foundation (IMF), the Annual Miracles for Myeloma 5K Hybrid Run/Walk, proudly celebrated its 10th anniversary this year and rightly so.

For the past nine years, the annual 5K event has raised over $700,000 and has funded nine IMF Brian D. Novis (BDN) Research Grants, among which was a 2014 BDN Research Grant for Bruno Paiva, PhD (University Hospital of Salamanca—Salamanca Spain) and his research on Phenotypic and molecular characterization of circulating tumor cells and minimal residual disease myeloma cells: understanding disease dissemination and chemoresistance. Dr. Paiva is also the recipient of the 2022 Brian G.M. Durie Outstanding Achievement Award.

This year, the 10th Annual Miracles for Myeloma 5K Hybrid Run/Walk took place on Saturday, October 15, at Ridge Park in Clark, NJ and raised over $50,001—another major achievement for its founders and organizers, as they “redefined being together” by working toward the common goal of finding a cure for multiple myeloma. Because of COVID-19, the 5K Run/Walk has evolved into a hybrid race to encourage virtual participation from those who cannot make it to the in-person race.

The organizers are proud to announce that cumulative funds raised in 2021 and 2022 during the 5K hybrid run/walk are able to fund a BDN Senior Research Grant this year.

Ron and Sheree Pask, along with their friend, Gina Klemm started the 5K run/walk in 2013, with a collective aim of helping raise awareness of the disease and fundraising for myeloma research.

Sheree was diagnosed with multiple myeloma in 2007. Gina’s brother, Frank Guarino, was also diagnosed with the disease. Sadly, he passed away in December 2012.

Now a 15-year myeloma survivor, Sheree recently shared her patient journey and the driving force which has kept the Miracles for Myeloma 5K Hybrid Run/Walk going for a decade.

When asked about her initial reaction when she was first diagnosed with the disease, Sheree recounts: “My initial reaction was disbelief as I personally had been feeling fine. I actually went to the doctors for my annual check-up as I had been doing for the past 10 years. It was detected through my regular blood work and like most people with this diagnosis, I had no idea of what myeloma was. You definitely go through many stages, including sadness and grief before the acceptance stage.”

As Sheree’s care partner, Ron shared some of the challenges he faced during the course of her diagnosis, care, and treatment. “There were many challenges, especially at the beginning when Sheree was first diagnosed since I was still employed. I wanted to be with her every step of the way through all of her doctor appointments and tests. Fortunately, I was able to take some time off when needed and I was able to work remotely at times. I also made sure that she was taking all her medications and tried to take care of Sheree and the household before and after her transplants.”

The Pasks’ relationship with the IMF began when Sheree reached out to the IMF for information. “I initially contacted the IMF by phone for informational pamphlets, etc. as a newly diagnosed myeloma patient. We also joined two different support groups sponsored by the IMF in New Jersey, years before we started Miracles for Myeloma, so we were familiar with the organization.”

Sheree and Ron then decided to start their own 5K Run/Walk for the IMF. “We had always wanted to do something to help raise awareness and money for this disease. We had attended the Miles for Myeloma 5K in Philadelphia a few times and felt that we could try to bring something like this to New Jersey to help other people affected by myeloma.

“After making some phone calls and speaking to some other myeloma organizations, we definitely felt the warmth from Suzanne Battaglia (Editor’s note: Suzanne was the former IMF Senior Director of Member Events) on the other end of the phone line. She was most helpful and reassured us that we could accomplish this goal,” said Sheree and Ron.

On what has kept them the Pasks with the Miracles for Myeloma 5K Hybrid Run/Walk: “Our desire to continue has always remained the same—to spread awareness of myeloma and to raise money needed for research. When Ilana joined us in this endeavor, she was just as heartwarming and helpful as Suzanne, and still continues to be.”

When asked about some of the greatest challenges they faced, organizing the 5K run/walk: “Producing a 5K of this magnitude is a lot of work and very time-consuming. During our 8th and 9th years, we needed to change to a virtual mode due to COVID, as we knew we couldn’t stop making Miracles for Myeloma during that time. This year, our 10th Miracles for Myeloma became a hybrid race to help make everyone feel comfortable, and to be able to keep our friends and teams from other states. Obviously, when changing to either mode, there will always be more challenges as well as the need for creativity to make it work. The hardest challenge has been continuing to get the word out to the public for the race.”

In terms of the 5K run/walk’s milestones, the Pasks felt that celebrating Miracles for Myeloma’s 10th year was “a big accomplishment in itself” and that the “feeling of making a big difference in the myeloma world” is very important to them.

“Another milestone was when we had the opportunity to shake the hand of a researcher who will be working because of our grant. When raising this kind of money, it feels very empowering and fulfilling to do something for such an enormous myeloma population. On a small scale, we started a balloon-filled Remembrance Path with white-colored balloons ‘In Memory’ of those we’ve lost to myeloma and maroon-colored balloons ‘In Honor’ of those living with this disease. Our goal and hope is to one day see the maroon balloons outnumber the white ones.”

For this year’s Miracles for Myeloma 5K Hybrid Run/Walk, Ron and Sheree are especially grateful to the teams and their respective team captains for their active participation during the event.

Team Matlosz’s Against Myeloma currently raised an impressive $20,295 since they started their team in 2019. They are very grateful and proud to have exceeded the $20,000 mark! The Matlosz family dedicates their active participation in the Miracles for Myeloma 5K Hybrid Run/Walk to the loving memory of their dad, Lenny, who lost his battle to multiple myeloma on December 20, 2018.

“Dad (Lenny) was a fighter and stayed positive through every issue and obstacle that was thrown at him,’ said Jessica, Alyssa, and Matthew Matlosz in their fundraising page, adding that myeloma did not define their dad but being “a loving husband, father, grandfather, great friend, and hardworking business owner” did.

“We do not want another family to have to go through what we did and suffer such an immense loss. We know that no one deserves to receive such an awful diagnosis as cancer. This particular cancer is an incurable and relatively uncommon cancer of the plasma cells. We are asking if you would help us reach our goals by bringing awareness, help fund research, improve treatments and to fight until a cure is found!” said the Matlosz family, while inviting everyone to still make a donation.

Meanwhile, the Central New Jersey Support Group Team, with Support Group Leaders Frank and Debbie Morelli as team captains, have raised over $6,500 for Miracles for Myeloma. You can still make donations to their fundraising page.

The IMF extends its warmest thanks to Ron, Sheree, and all the hardworking teams and team captains who made the 10th Annual Miracles for Myeloma 5K Hybrid Run/Walk a success. The IMF is truly grateful for their immense contributions to myeloma research and to the IMF’s mission of improving the quality of life of myeloma patients while working toward prevention and a cure.