Nikki Roldan is a standout as a myeloma patient. At age 30, she is energetic and always armed with what she calls, “PMA—or positive mental attitude.” Around her neck she wears a necklace that she made out of bullet casings. She, her big brothers, and her dad went to the desert to shoot guns. Nikki gathered the casings of the bullets to make her own jewelry. Along with jewelry, Nikki works in many different artistic mediums, including painting, sketching, and drawing.

With every cell of her essence, Nikki exudes this spirit of a Myeloma Warrior. As IMF Chairman of the Board Brian G.M. Durie, MD describes them, Myeloma Warriors are patients, caregivers, and others in the myeloma community who have the "energy and resilience" to live well and care for those with myeloma.

Diagnosed with MGUS (monoclonal gammopathy of undetermined significance) at 25, Nikki is no stranger to adversity. As a child, she had mastoidectomy surgery; and as an adult, she has had several surgeries for endometriosis.

At 27, her MGUS progressed to smoldering multiple myeloma (SMM). Nikki faced the diagnosis head-on, giving herself a week “to cry...to feel…to just not care… and then get down to business.”

Nikki began reading medical journals and joined Facebook support groups. To her surprise, the first support groups she encountered for people living with myeloma had mostly older adults, from 50 to over 70 years old. Eventually, Nikki found a peer-support group for multiple myeloma patients who are 45 and under. As Nikki has been coping with her diagnosis, she emphasizes how important it is to have social, emotional, and mental support.

At the time Nikki was interviewed, her myeloma was smoldering. She had not yet undergone any treatment regimens. Yet, she has faced her share of ups and downs. For one year after her diagnosis with MGUS, she was without insurance until getting on Medi-Cal (the state of California’s program for adults and children with limited incomes).

Once back on an insurance plan, she continued to be “adamant about preventative care.” She followed up with an oncologist for a second bone marrow biopsy.

Being Pro-Active – the Good, the Bad, and the Painful of It

The bone marrow biopsy procedure was a double-edged sword. While giving her an accurate diagnosis, Nikki Says the biopsy was “pretty intense,” she said. “First, they used a needle,” then she felt “this weird pressure.”

After this procedure, Nikki had a reaction that many may feel would be the opposite of enduring pain. She found herself saying,“You know, it hurt, but I’m good. I’m like, ‘Bring it on! I can handle everything after that.’”

Learning How to Live Well with Myeloma 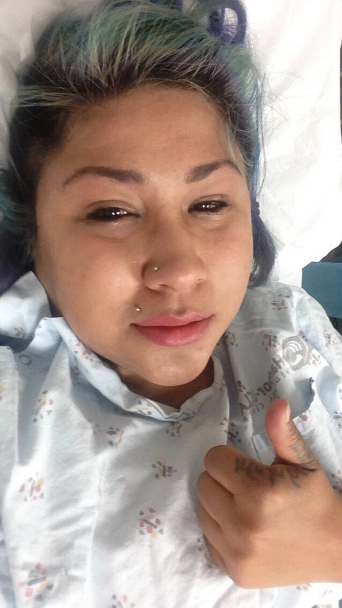 Nikki at the hospital during her bone marrow biopsy procedure

After the procedure and three years into living with MGUS, Nikki was diagnosed with smoldering multiple myeloma. She deals with bone pain and fatigue. This big change in her life has required Nikki to always be prepared. At home she keeps a heating pad and CBD oil close by to relieve pain symptoms. She also makes it part of her routine to meal prep for the week.

Unexpected Complications of a New Diagnosis

Another surprise that has come with her diagnosis is coping with general brain fog. She has found herself mid-conversation not knowing what others have said or what she herself has said. The bone pain for Nikki has been so bad she has described it “at its worst, literally as if the inside of my bones are on fire.” This intense pain has led to panic attacks.

In typical Nikki-fashion, she sought help for this complication. She has seen a psychiatrist and a therapist, has taken medication for anxiety and depression, and is at the ready for the unexpected onset of symptoms. When she has a flare-up, Nikki takes a moment to breathe and ask herself “Okay, what can I do? Do I have any CBD cream on me? Do I have anything I can do? Do I have my heating pad with me? What can I do right now?”

Leaning on Her “Anchors”

In the now is where Nikki lives each moment, each day. She lives on her own with her dog Tommy, who always greets her as if to say, “Omigosh you’re home,” no matter how she is feeling! Her parents live 10 minutes away, and her mother is an anchor to Nikki. She has been by Nikki’s side through her many health issues since childhood.

“She wants to be here for me with everything that I go through. We’ve always been close, but this just made us closer—especially sticking by my side through the anxiety and depression from it all…Bless my mother. She is the most patient, kind, and warm person you will ever meet!”

Another surprise along her myeloma journey has been becoming friends with another one of her “anchors.” Introduced through mutual friends, Nikki began dog-sitting for Lisa, who Nikki describes as a “bad-ass, double-mastectomy, breast-cancer survivor.”

Once these two learned that they were going through similar situations, they have been lifelines to one another. Lisa, too, is young, and has been living with breast cancer since her early thirties. As they both have been “going through these life-changing illnesses,” they have had an “instant connection.” Together, they can “openly talk about cancer. And not be weird about it.”

Nikki brought Lisa to the IMF’s 13th Annual Comedy Celebration in October 2019. They stay connected by using an app called “Marco Polo.” Lisa will Marco out to Nikki that she is in chemo. Nikki will Polo back something like, “Oh girl, I’m on the couch with a heating pad right now.” 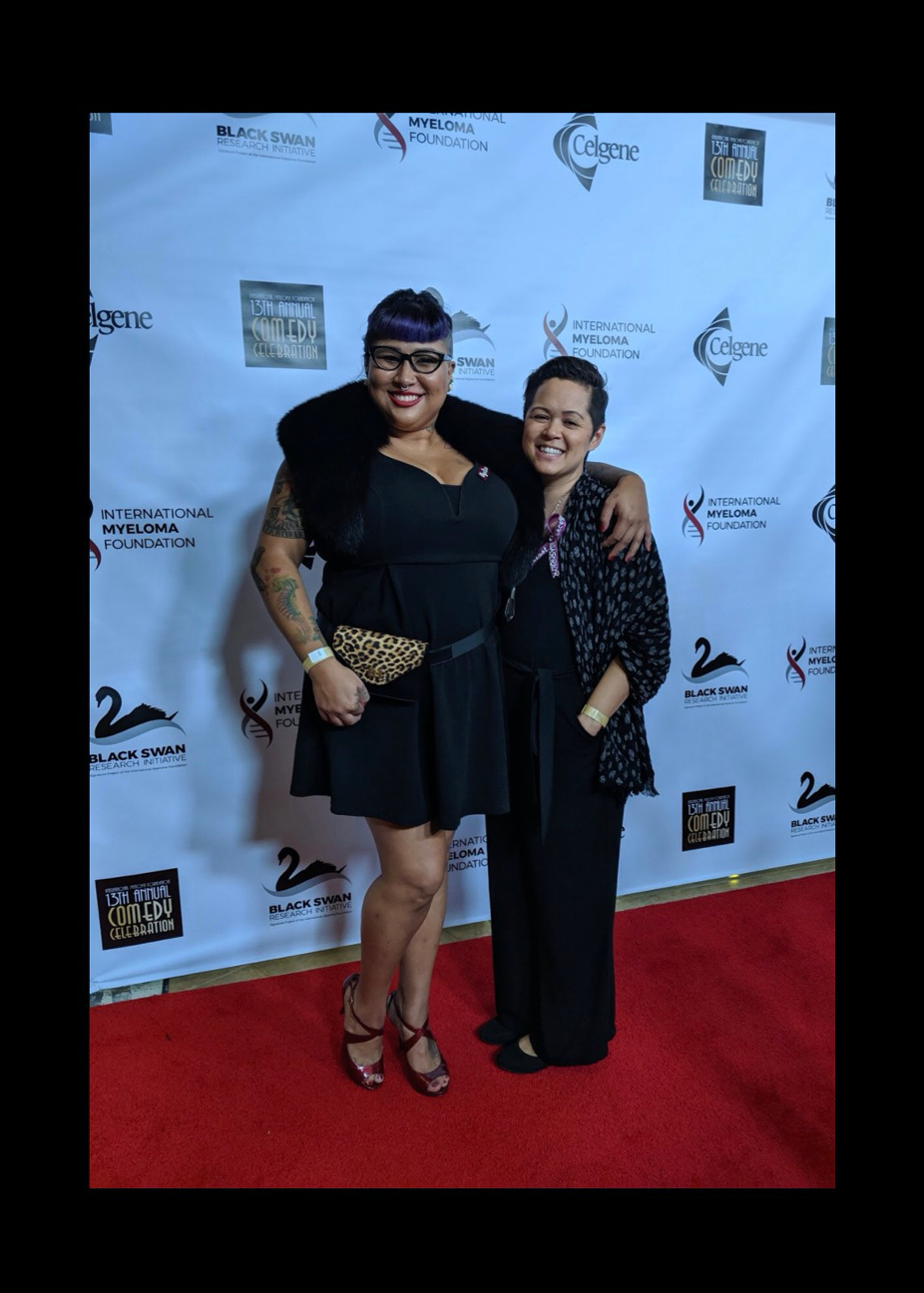 “You know, like, we can just be ugly together. Just bumming it,” says Nikki “I feel very comfortable, especially since we are around the same age.”

Being Her Authentic Self

Nikki expresses the comfort of being her authentic self in all she does. On the lapel of her shirt she wears a whale pin. This pin is a miniature of her 18 x 24 drawing that was featured at a large art show at the Iron Triangle Brewery in the SoCal area. To make this drawing, Nikki studied the anatomy of whales. She gave the original art piece to her brother for his wedding.

The takeaway: Nikki sees herself “as an artist.” “I’m not just a cancer patient. I’m an artist who was diagnosed with multiple myeloma. I still work my day job. I’m passionate about my art. I make it a point to make time for my art, as well as not being a hermit crab in my house…[I] make some time to be social. I think that’s very important.”

“Resilience,” Nikki says, “is just another mountain that I’m going to climb, and I’m going to conquer. And to me…to me…resilience is just thinking back to that drill [from the bone marrow biopsy]…Nothing will ever take away my smile.”

Nikki’s Myeloma Warrior spirit relies on support. As her friend Lisa often reminds Nikki, “Dude, ask for help, if you need help. People will help you. They will help you if you ask.”

Nikki hopes to tackle a couple of issues that especially affect young people with myeloma. One is finding her peers. And two is being a single person living with a chronic illness. Nikki wants to find more resources that will help singles with chronic illness find community. Those with chronic illness need a way to talk about their conditions with individuals who may not be facing such issues, particularly in romantic relationships. “Oh, say I’m meeting someone who’s healthy, and when do I break it to them. How do I tell them that? And how do I explain where I’m at.”

Putting on Her Warrior Cape and Soaring 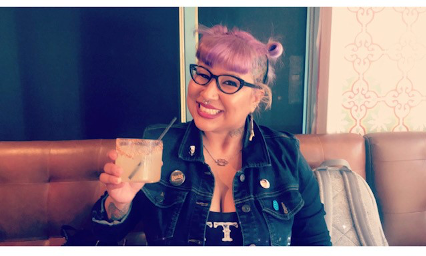 Nikki says she did not realize how much the illness would affect her mentally. “It’s been a struggle,” she says, “but I got the help I needed. I feel so much better moving forward with my life. And cancer doesn’t care how old or how healthy you are…I want everyone to see that this isn’t an older person’s illness. I was diagnosed at 27. I’m 30 now. But nothing will ever stop me from learning and fighting and being there for my peers with this illness.”

This interview with Nikki Roldan was conducted in December 2019. Since the time we met, Nikki’s myeloma has progressed. She remains resilient and we commend her strength and Myeloma Warrior spirit.

Patient Seminars: The Heart of What the IMF Does