This week, the iStopMM team launched the ambitious screening, treatment, and prevention program for MGUS, SMM, and MM in Iceland. On Monday, a national TV program explained the project to the whole population of Iceland! Dr. Sigurdur Kristinsson, the Principal Investigator, introduced the project, while I appear on camera summarizing (in English, of course) the importance of the study for the IMF’s Black Swan Research Initiative® (BSRI®), which is funding the study. As I explain, early diagnosis provides the best opportunity for curative therapy.

The launch continued with a press conference on Tuesday featuring Dr. Kristinsson and Iceland President Guðni Jóhannesson, who signed a consent form to participate in the screening project since he is over 40 years old, as are the other approximately 140,000 targeted Icelandic participants. On Wednesday, 140,000 invitations (minus one) were mailed and now everyone is awaiting the responses. 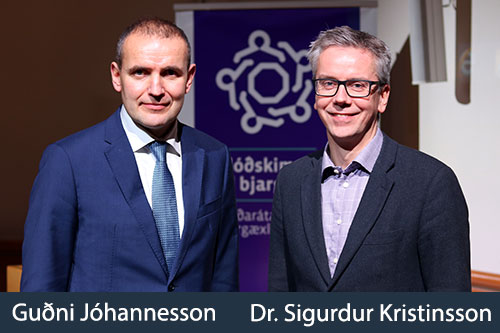 With the help of Facebook postings and text messaging, the recent pilot mailing drew a rapid response. In the pilot, after about three weeks, it was estimated that ultimate participation would be close to 90%! This is extraordinary since typical participation rates in population screening studies are approximately 20%.

This pioneering effort breaks new ground in a variety of ways. By being enormously successful, it illustrates how to conduct population screening. Awareness is the key, and the iStopMM team has accomplished this in spades! Exposure on national TV, a press conference with the president, and an extensive social media/electronic follow-up has made the outreach fun and engaging, while generating true enthusiasm about participation, being involved, and “making a contribution to medical science.”

The success of the iStopMM program in Iceland gives hope that this type of outreach can allow a whole population to achieve early diagnosis. It is increasingly clear that early diagnosis is essential, and must occur before complications set in, when a combination of prevention and cure of active disease can occur. Myeloma researchers can learn from those who work in other cancers. "We are investigating whether there is a benefit to screening for precancerous myeloma as is currently done for precancerous cervical cancer and breast cancer,” said Dr. Kristinsson at the press conference.

Who develops MGUS, who does not?

By identifying all the patients with MGUS (the precursor of myeloma) early, one can learn a lot about who these people are: How old are they? Where exactly do they live? What is their diet and lifestyle? What have been their occupations? These are a few of the key questions that will be answered. As the picture emerges of who develops MGUS versus those who do not, we anticipate that true prevention strategies can be put in place – just as is happening with patients who have obesity and diabetes.

A recent epidemiologic study in Iceland has already identified that a traditional “high fish” diet is beneficial in early life (reducing the risk of MGUS), and an increase in meat eating later in life is bad (increasing the risk of active MM). As noted in an earlier blog post, the deCode genetic project in Iceland has also provided powerful background genetic information for all Icelandic residents. This means that Iceland is a great place to study first, but also is a great place to develop precise information that can be applied elsewhere.

In Iceland, all medical records, including doctor visits and medications, are captured in a central database. This means that these details can be easily correlated with everything from causation to outcomes. Electronic Medical Records (“EMRs”) are now broadly used in the US and can provide similar correlations, although protocols for diagnostic testing and management are quite variable. Precise information from Iceland can help trigger a more standardized and cost-effective approach with the use of recommended guidelines.

A final point is that social media engagement is undoubtedly enhancing participation in the iStopMM study and is also an opportunity to education and improve outcomes. Recent examples now show that sharing of excellent outcomes encourages others to proceed with this “successful protocol,” leading to implementation of “guideline-approved” interventions. Involving the patient and encouraging the ideal approach is truly an important opportunity.

Now, iStopMM is off and running! I will provide updates as accrual proceeds. The ability to start both preventing and curing myeloma in Iceland is incredibly exciting for the iStopMM team, who must be congratulated on a marvelous start.

The importance of facts in science: the Black Swan Research Initiative search for the cure moves ahead