“Adopt not adapt” was the mantra as more than 124 attendees listened intently to the opening lectures given by Dr. María-Victoria Mateos, Dr. Bruno Paiva, and myself at last week’s 2nd International IMF-EuroFlow Workshop on Myeloma MRD (minimal residual disease). Dr. Alberto Orfao welcomed everyone to the ancient city of Salamanca in northwest Spain, where some were attending the workshop on Next-Generation Flow (NGF) cytometry in myeloma for the second time. It was striking and wonderful to see eager participation from all around the globe, expanding the IMF Black Swan’s MRD Consortium to include more than 50 institutions from more than 20 countries.

Dr. Mateos set the stage by outlining all the new myeloma therapies which allow us to push forward to achieve an MRD-negative status. I emphasized the central role of precise MRD testing needed to monitor disease status at low levels (the central tenet of the IMF’s Black Swan Research Initiative®, and Dr. Paiva reiterated the clear value of MRD as an endpoint in achieving best outcomes for myeloma patients.

How does NGF work?

The centerpiece of the first day of the two-day workshop was the presentation of the details of the NGF method by Dr. Orfao. The ideal antibody cocktail necessary to detect myeloma has been worked out over the past three years, resulting in the 8-color (antibody) 2-tube method, which is a very robust myeloma detection panel designed to replace the currently used diverse, less sensitive methods. At the first workshop, held in 2014, there were many questions about the antibodies and details of the NGF method. This year—as test centers have discovered that the method is standardized, reproducible, and remarkably sensitive—the questions focused on truly adopting the method without adapting with tweaks or changes which can really distort the reliability and sensitivity of the results. The focus was on how to adopt the method using the new multidimensional computer software approach to automatically “gate” or select the myeloma cells within bone marrow and/or blood samples. 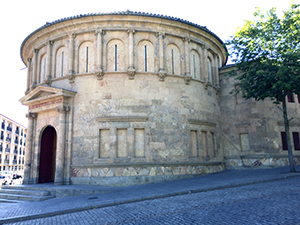 There were literally gasps from the audience as Dr. Georgiana Grigore from the Salamanca research team illustrated how simple, yet powerful, the automated computer program is for NGF: it will produce a complete printout showing the number of myeloma cells present at a sensitivity level of 10-5 or 10-6: One myeloma cell in a million cells. Attendees subsequently had the opportunity for hands-on learning about both the antibody methods and computer software—again, resulting in a very popular series of discussions and breakout groups.

As we talked about the launch of the NGF method, it was somewhat prophetic that Dr. Orfao had arranged for dinner at an old monastery (now a hotel and winery) close by, which was where Christopher Columbus met Queen Isabella of Spain and persuaded her to pay to build his ships and launch them to discover the Americas. The queen gave him jewels, which he used to pay the ship builders, and guess what? Monday was Columbus Day!

Advantages of NGF in myeloma testing

So what makes the NGF method so valuable? Firstly, it is sensitive and robust. The standardization of the NGF method has been validated by impressive correlations with both remission duration and myeloma patient survival. With a confirmed negative reading, there have been no relapses within the initial study population at approximately two years as of now.

The NGF method is also broadly available and cost-efficient, even for busy labs, which can now have access to the new software program. Exciting new uses of this new flow cytometry method are testing of the blood (in addition to bone marrow) and immune monitoring.

Using the NGF method to test the blood has revealed two important aspects of myeloma: biology, both at the early MGUS/SMM stages and at the point of relapse. In both MGUS and SMM, myeloma cells are detectable in the blood. The numbers and the nature of the cells will prove to be important diagnostic and prognostic factors.

At relapse, for example, from an MRD-negative to an MRD-positive status, myeloma cells can be measured in the blood. We are not at the point where we can switch over to blood-testing alone, but it appears that we may be able to reduce the need for bone-marrow testing.

The immune monitoring is a whole new aspect and a special advantage of using the NGF method. Thus, for example, as was explained in detail by Dr. Orfao, it is possible to assess the immune status of the patient who may be MRD-negative or MRD-positive status. It is known that for patients with an MRD-negative status, the recovery of immune function is especially good. However, an important subset consists of patients who are MRD-positive but have favorable immune features. These patients can do extremely well for many years.

Global potential and next steps

Thus ultimately, we have an excellent test which is sensitive and robust, and for which there is tremendous enthusiasm to adopt globally. There are many opportunities for ongoing and future research. It is also hoped that patients will soon have easy access to this method in the US and around the world.

Many thanks to the Salamanca and Pamplona research teams who have worked so hard on this project. And thanks, as well, to the IMF team members who supported the workshop in Salamanca: Lisa Paik, Senior VP, Clinical Education & Research Initiatives; Pierre Sayad, Senior VP, Global Medical Affairs & Strategic Partnerships; and Amirah Limayo, Research Project Coordinator. Prof. Jesús San Miguel, a key enthusiast who was unable to come to this second workshop, called to give words of encouragement and congratulations.

We will keep you posted as new developments emerge!

Are We Starting to Cure Myeloma?

MRD Testing: Have We Found the Method We Need?