The bombings in Brussels made this a tough week for the global community, but President Obama pressed ahead with his historic visit to Cuba. In his speech on Tuesday, he cited examples of past medical collaborations between our two countries, such as the work of Dr. Carlos Finlay in Cuba, which helped Dr. Walter Reed learn how to combat yellow fever, as well as more recent joint efforts to fight Ebola in West Africa.

By coincidence, Tampa [Florida] Myeloma Support Group founder Jim Barth and his wife were also in Cuba this past week. They met with Dr. Martha Osario at the National Institute of Oncology and had discussions regarding standards of myeloma care in Cuba. They also introduced her to the services provided by the IMF. Both IMF and ASH publications were provided and appreciated: clearly the beginning of mutual support and collaboration. 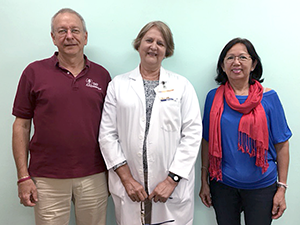 You may have also noticed the announcement that Cuba has developed a lung cancer vaccine in a joint venture between Dr. Kelvin Lee at Buffalo’s Roswell Park Cancer Institute and Havana’s Center for Molecular Immunology, the culmination of a 25-year research project. Wonderful Cuban cigars have unfortunately contributed to lung cancer as the 4th leading cause of death in Cuba. This is potentially important for myeloma because the vaccine is against epidermal growth factor (EGF), which is also a growth factor for myeloma. So this vaccine approach, and even this specific EGF target, may prove valuable for myeloma.

It has been a busy week for myeloma immune therapy updates. Vice President Joe Biden visited the Fred Hutchinson Cancer Research Center on Monday to discuss the White House’s $1-billion cancer “moonshot.” Yet again, the focus was on immune approaches, especially CAR-T cell therapy. A Seattle-based patient, Bard Richmond, diagnosed with aggressive myeloma in 2014, met with the Vice President and no doubt conveyed the very personal message of need in his own situation. The laboratory of Dr. Stan Riddell is making dramatic progress with the engineered T-cell immune therapy approach.

In further news, Johnson & Johnson announced a collaboration with Roche to test the combination of the recently approved anti-CD38 monoclonal antibody, Darzalex®, with Atezolizumab (anti-PDL1) for relapsed myeloma. This “all-immune” combination is an exciting new option. Additional studies will include combinations with Revlimid® and pomalidomide (Pomalyst®). Although it will take time to conduct these trials and assess the ultimate role of these new combinations, this rapid progress is truly exciting for the myeloma community.

As I mentioned last week, it would be great if we had rapid guidance from a parallel universe to sort out all our questions and concerns quickly. A fun story in the New York Times suggests that maybe parrots can help us out. Researchers say that parrots easily rival apes and dolphins in all-around “braininess” and resourcefulness. Irene Pepperberg, who studies animal cognition at Harvard University, calls parrots “feathered primates.” They are especially good at sorting out combinations and sequences. Hmm…sounds like a familiar problem!

The good news is that we have so much new to sort out.

As usual, I will keep you posted on progress!

From the IMF Newsroom

1.      Treatment of Multiple Myeloma with high-risk cytogenetics: a consensus of the International Myeloma Working Group

2.      Low levels of circulating adiponectin are associated with multiple myeloma risk in overweight and obese individuals

This analysis indicates that the hormone adiponectin may protect against myeloma growth and how low levels can possibly increase risk. (Paywall; patient access.)

3.      Safe and prolonged survival with long-term exposure to pomalidomide in relapsed/refractory myeloma

4.      FDA Approves Evomela for the Treatment of Multiple Myeloma

This new formulation of melphalan for intravenous use (for example, with ASCT) has reduced renal and cardiac side effects. (Paywall.)

Precision Oncology and the Cancer Moonshot: Where Do We Stand?

The Black Swan Research Initiative Is the “Myeloma Moonshot”