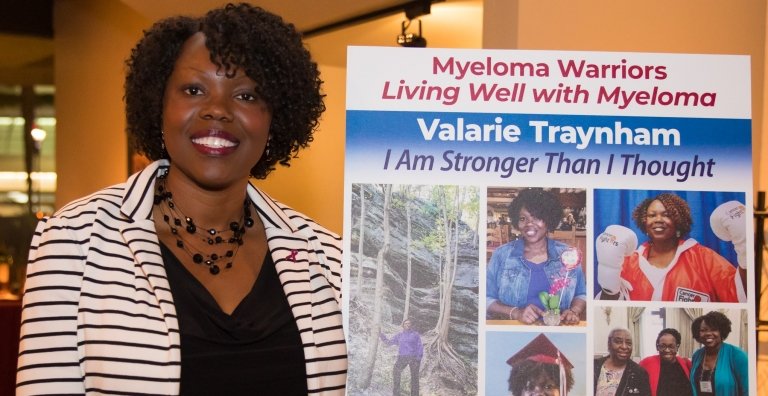 I Am Stronger Than I Thought

Although Valarie Traynham has been living with multiple myeloma, she draws strength from being a Myeloma Warrior. At the Brian D. Novis Research Grant Awards reception, a night filled with hope held annually during the American Society of Hematology meeting, Valarie movingly described her experiences with the disease and the ways in which the IMF has supported her along the way. She shared, too, her ambitious goals for the future. She is an inspiration for us all.

Good evening. It is so inspiring to be here tonight, in a room with so many people who have contributed so much to the myeloma community.

In the past four years, since my myeloma diagnosis, I have learned so much. But the most important thing I have learned, the thing that carries me through everything else, is that I am stronger than I thought.

In late December 2014, I thought I had a bout of the flu that I could not shake. I was tired all the time, I had back pain, and I also had nose bleeds that would last for hours. I assumed my iron was low. After a month of feeling awful, I visited my primary care physician thinking I would get an iron prescription and be on my merry way. She ordered a CBC panel and then immediately referred me a local hematologist. I was officially diagnosed with myeloma in March 2015.

I had never heard of myeloma before, and out of the fear of not knowing, I began treatment one week after being diagnosed. Two weeks into my initial treatment, I started to get my bearings enough to seek a second opinion. I stayed with that second doctor and his treatment plan, and once my numbers plateaued I readied myself for a transplant with a regimen of Kyprolis, Pomalyst and dexamethasone.

I transplanted in February 2016, then did consolidation therapy with the same regimen: Kyprolis, Pomalyst and dexamethasone. I couldn’t have asked for anything better for my own treatment. It was successful, and because of that I’m grateful to say that I’ve been on Pomalyst as maintenance for more than a year now.

That’s the summary of my diagnosis and treatment. It tells part of my story of these past four years, but it is not my entire story. My story is fuller and richer than just this, because my myeloma doesn’t have the power it had in my first couple of years.

Myeloma is something I have-- it doesn't have me.

I am Living Well, which for me means being well-rounded in all aspects of life. Good health, sound mind, positive relationships. I love looming scarfs and hats-- I live in Chicago after all, not tropical San Diego. I also love hiking, bike riding, reading, game nights, Bible study, bowling, and watching movies. Being the best Independent Beauty Consultant with Mary Kay that I can be.

Living Well with Myeloma means embracing all of these things with “balance.” Being aware but not constrained by a myeloma routine. Using my faith as strength. Making sure I don’t go it alone. Accepting where I am and enjoying life to the fullest I can. Looking for the silver lining in all things. Staying positive. Having hope! Reaching my fullest potential.

For example, prior to my myeloma diagnosis, I had returned to school to complete my undergraduate degree in Human Resources. I was just six months shy of graduation when I had to stop after my induction treatments. I was just not able to concentrate on my studies.

But at the 90-day mark after my transplant, when my doctors explained that I was MRD-negative, I felt a renewed sense of purpose-- and I realized that I really wanted to accomplish the goal of college graduation.

On my college graduation day, wearing my cap and gown, I felt overjoyed, thrilled, happy, relieved-- and exhausted too. I had just completed my two days of chemo treatments but was determined to make the ceremony no matter how much fatigue was kicking in. I also remember saying to myself: “Now what? Okay, you’ve finished this. What does this mean, and what do you want to do now?”

On the one hand, it made me anxious. On the other hand, I felt inspired to do.

It helped me recognize: I bloom where I’m planted.

Finding my myeloma support group has been a huge part of my transformation too, of learning my strength. I had been seeking a group for awhile, so I was thrilled when the Aurora Illinois Myeloma Networking Group established itself in June 2017, in my area outside of Chicago. After about a year in the group, I became our Support Group Leader, and in addition to being in San Diego to speak with you tonight, I am also representing my group by attending the ASH conference. Everything I am learning I will take back home with me and share with my local myeloma community, a group of people who have also become my close friends.

I think back to my initial diagnosis, and that fear, and so many unknowns as I quickly jumped into my own treatment. And now here I am, educating myself and supporting, advocating for and empowering others.

The IMF is a crucial part of my ability to do these things. Not only is the IMF the reason I am here at ASH, but the IMF’s webinars, Patient & Family Seminars, publications, Infoline, and Dr. Durie’s blogs are also such important resources.

Because of these resources and opportunities, my education and empowerment means I now ask my doctors a ton of questions. I don’t just blindly agree-- I ask for the logic behind the decisions they want to make.

Again, I think back to my initial diagnosis, the fear, the unknown, and then I reflect on this ease and confidence I now have when I’m speaking with my doctors. It’s a strength I did not know I could have.

Part of having this strength is acknowledging that there are challenges. My treatment side effects have been “typical” ones, but I had not taken steroids before, so I was shocked by the weight gain and the mood swings. And I was greatly affected by my chemo-induced menopause. It was not something I had discussed with my doctors prior to my transplant, and I was not emotionally prepared to deal with it. I now call this period “my own personal summer moments” but at the time the effects meant I avoided being around people for the fear of embarrassment or just being uncomfortable. I felt as though I had been giving new life by my transplant but then was being robbed of being able to really enjoy it.

But I've learned to now embrace the challenges that I face rather than wishing them away, or trying to figure how to wiggle out of them. Every challenge I face is an opportunity for me to realize my strength comes from a greater source, for me to grow in character, and for me to understand who I am.

It is also so important to acknowledge that part of the reason I now have this strength is the incredible research being done and treatment advances being made. Even in the past year-and-a-half of our support group being formed, the myeloma community has grown so much in our knowledge.

Armed with this knowledge, I encourage my fellow support group members to be Myeloma Warriors. Together we are warriors because we make things better, not just for ourselves but for others. We are the ones people look to for guidance and encouragement, but we also know how to seek and use the help of others.

Myeloma Warriors reach out to newly diagnosed patients--patients like the person I used to be-- and declare: “I am here with you. You are not alone.”

It boils down to one word: Resilience.

I hope to continue building my Mary Kay business and also obtain my Human Resources certification.

I’d like to run-- and/or walk-- the Chicago Marathon.

I intend to be the best me that God created, and invite others along on my journey.

I also plan to become more involved in the world of myeloma advocacy, to be able to share my story to encourage others.

That plan has started here tonight, and for that I thank you all. Looking back to four years ago, I never would have thought I would-- or could-- be sharing my story on a public platform.

And I never would have thought that I would ever be grateful that I have myeloma.

Because myeloma has shown me my incredible strength, a strength I never before knew I had. 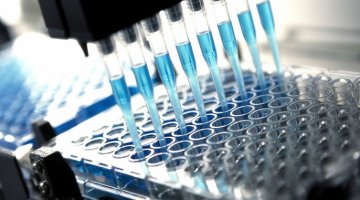 What are the prospects for early diagnosis, CRISPR gene-editing, and CAR T-cell therapies in myeloma?