A few years ago Rob Enright started experiencing back pain. 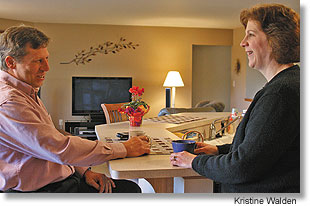 "I would sneeze and it would put me to the floor," he said.

His wife Sue knew something was really wrong when the pain was enough to send him to seek help.

"He doesn’t go to the doctor unless something is really bad. He ended up driving himself to the ER and because of his age they immediately thought heart attack," she said.

When that wasn’t the case, she said Rob went from "doctor to doctor, to doctor. He ended up in urgent care three or four times and saw a cardiologist. Then one doctor referred him to a rheumatologist because they thought maybe (his back pain) was arthritis. On a hunch, that doctor ran a particular blood test and found one of his protein levels was particularly high and he was referred right away to an oncologist," Sue said.

That referral, however, almost never happened.

"When he saw the rheumatologist he said ‘that’s the last doctor visit, after this I’m done. I’ll just deal with the pain,’" Sue said.

Rob was lucky he chose to go in one more time.

"She took the time to dig deeper, she said, ‘I’m not going to let you go until I figure out what it is,’" Sue said.

What she found was Rob was suffering from multiple myeloma.

Multiple myeloma is a cancer of the plasma cells, which pile up and cause lesions and causes fractures to bones. It especially targets bone with higher amounts of marrow, including the spine, which is what happened to Rob, and crushed his vertebra.

The couple don’t blame the doctors for not recognizing the problem right away, since the cancer only accounts for 1 percent of cancers diagnosed.

Since his diagnosis, Rob has received chemotherapy and after a stem cell transplant - using his own cells harvested before a high dose of chemo which killed all the cancer cells, and other cells - on Sept. 25 last year, he has been in complete remission.

"They call it my second birthday, because (the dose of chemo) completely wipes everything out. Once I got my stem cells back in, we just had to wait for them to graft to the bone marrow," Rob said.

What helped the couple get through the diagnosis and treatment the most, was the support they found from others experiencing the same thing.

"The support groups were our life-line. You can talk to doctors all day long, and you can research it but you’re just getting statistics. To sit in a room full of people you have what and you’re able to hear their stories ... they’re walking it with you," Sue said.

"The support groups really educate you. The more you know about the disease, the better you can deal with it," said Rob.

The couple found that support in groups in Racine and Madison. After moving to Jackson in June, they learned there weren’t any support groups in the area, and decided to start one of their own. The support group, which will begin in November, is affiliated with the International Myeloma Foundation and supported by St. Joseph’s Hospital’s Alyce and Elmore Kraemer Cancer Care Center.

"We knew all along we wanted to start a support group. We’ve come through a this and are in a really good place right now and we feel like we can help other people," Sue said. "We want people to have hope. Some doctors are still telling people (a diagnosis means you’ll live) two to three years. For someone to hear that it is incurable it takes all hope away. That’s just a statistic. We want people to have hope."

The reason hope is tangible, she said, is because in the past three to five years several new treatments have either been FDA approved or are in clinical trials for the treatment of myeloma, making it much more manageable.

"Many patients go on to lead full lives for years, even decades, after diagnosis. With increasing research, the overall outlook for patients is improving steadily. Knowing more about the disease, and understanding what can be done to help, reduces anxieties and makes it easier to come to terms with the diagnosis," according to the International Myeloma Foundation patient handbook.

The couple hopes to spread that message, and to tell people not to give up seeking help if they feel there’s a problem.

"Be persistent - don’t give up. Keep going and going and don’t stop until you find (the right) doctor," Rob said.