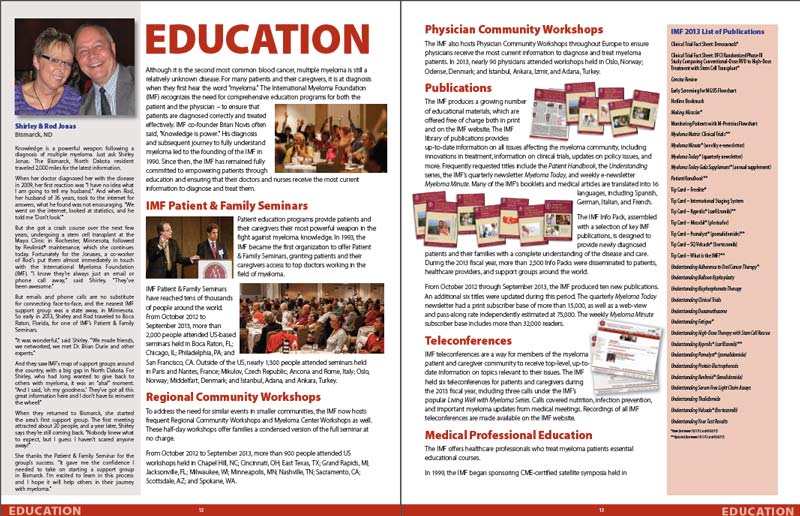 The North Dakota Multiple Myeloma Group was featured in the 2013 Annual Report of the International Myeloma Foundation.

When her doctor diagnosed her with the disease in 2009, her first reaction was “I have no idea what I am going to tell my husband.” And when Rod, her husband of 36 years, took to the internet for answers, what he found was not encouraging. “We went on the internet, looked at statistics, and he told me ’Don’t look.’”

But she got a crash course over the next few years, undergoing a stem cell transplant at the Mayo Clinic in Rochester, Minnesota, followed by Revlimid® maintenance, which she continues today. Fortunately for the Jonases, a co-worker of Rod’s put them almost immediately in touch with the International Myeloma Foundation (IMF). “I know they’re always just an email or phone call away,” said Shirley. “They’ve been awesome.”

But emails and phone calls are no substitute for connecting face-to-face, and the nearest IMF support group was a state away, in Minnesota. So early in 2013, Shirley and Rod traveled to Boca Raton, Florida, for one of IMF’s Patient & Family Seminars.

“It was wonderful,” said Shirley. “We made friends, we networked, we met Dr. Brian Durie and other experts.”

And they saw IMF’s map of support groups around the country, with a big gap in North Dakota. For Shirley, who had long wanted to give back to others with myeloma, it was an “aha!” moment. “And I said, ‘oh my goodness.’ They’ve got all this great information here and I don’t have to reinvent the wheel!”

When they returned to Bismarck, she started the area’s first support group. The first meeting attracted about 20 people, and a year later, Shirley says they’re still coming back. “Nobody knew what to expect, but I guess I haven’t scared anyone away!”

She thanks the Patient & Family Seminar for the group’s success. “It gave me the confidence I needed to take on starting a support group in Bismarck. I’m excited to learn in this process and I hope it will help others in their journey with myeloma.”