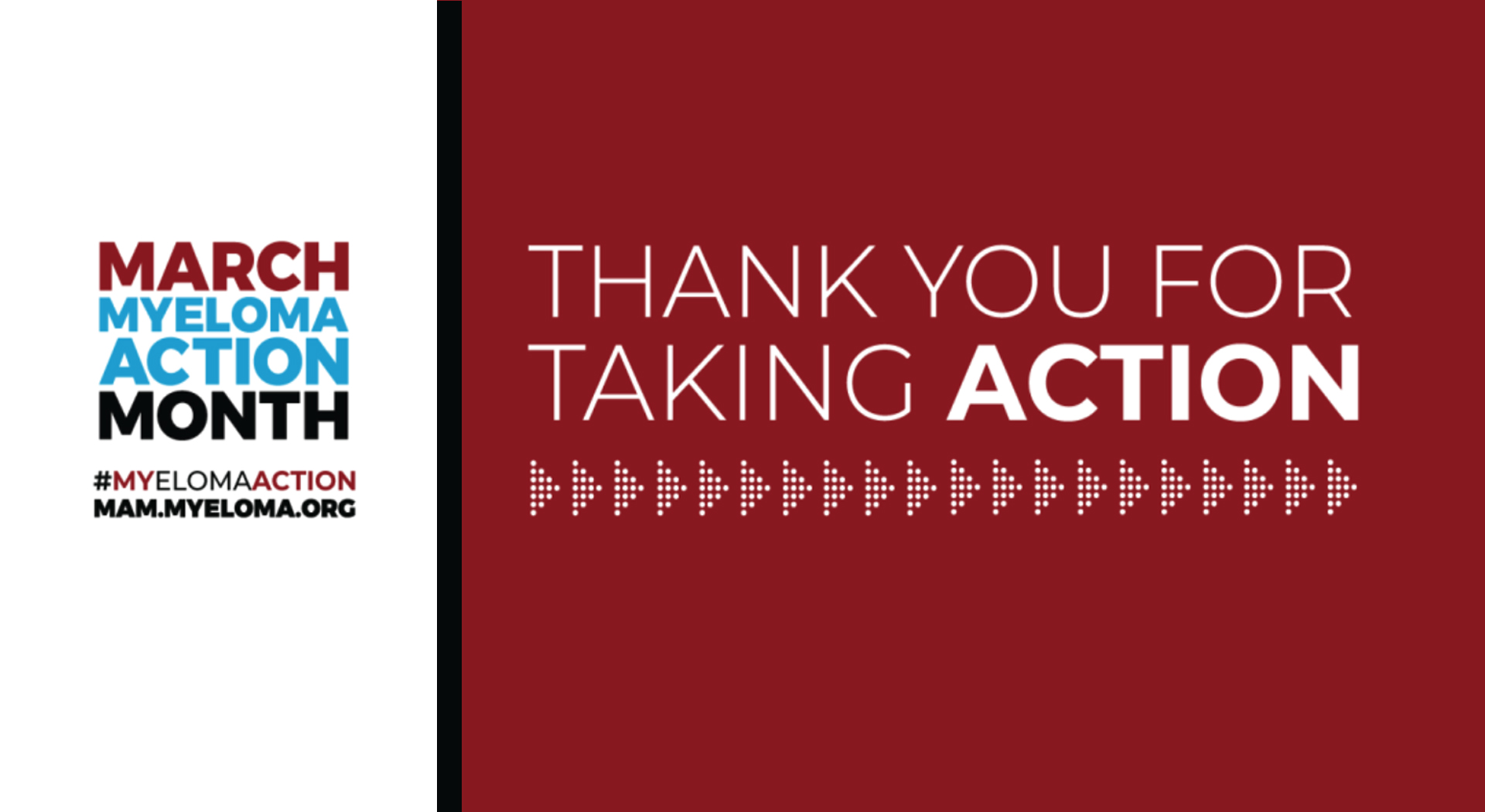 With Over 30 Million Reached Across 46 Countries, the International Myeloma Foundation (IMF) Makes a Global Impact for 2022 Myeloma Action Month

STUDIO CITY, CA, April 6, 2022 — As this year’s Myeloma Action Month came to a close, the International Myeloma Foundation (IMF) was unwavering in achieving its goals. By encouraging individuals and groups to take action for myeloma through a powerful social media campaign, the IMF succeeded in increasing awareness of the disease, and in inspiring a culture of hope and resilience among the members of the myeloma community.

The IMF is proud to report that the myeloma community went above and beyond when it came to taking action and making a difference for myeloma. Despite the pandemic and an ongoing conflict in Ukraine, the global community came together to participate in the Myeloma Action Month movement— with over 30 million people in 46 countries reached across the globe.

IMF President & Chief Executive Officer and 26-year myeloma survivor Yelak Biru is truly elated at the success of this year’s Myeloma Action Month: “Throughout this year’s Myeloma Action Month, the IMF focused on encouraging engagement through the theme, #MYelomaACTION. Each of us has a role in advancing the art and science of cancer care in general, for better outcomes for myeloma in particular.”

In 2009, the IMF launched March as Myeloma Awareness Month to shed light on this little-known cancer. By 2016, the organization elevated the campaign to Myeloma Action Month, with the added purpose of encouraging individuals and groups to take actions that positively impact the myeloma community.

Forty-six countries joined the #MYelomaACTION movement this year, with Myeloma Action Month social badges and infographics translated into more than 12 international languages. Individuals and groups shared their actions, posts, and photos across the globe.

Some of the highlights of this year’s Myeloma Action Month include:

-    For 31 days, the Myeloma Action Month advent calendar was filled with inspiring posts of actions taken by members of the myeloma community to draw attention to the disease while encouraging others to share their own actions.
-    Myeloma Action Month was declared in Hamilton County, TN and in Walker County, GA
-    The IMF Support Group Team virtually presented and provided tech support to 80 support groups during the month of March, with updates and resources from the IMF.
-    IMF Regional Director of Support Groups, Kelley Sidorowicz, created guided audio meditations and yoga videos for those living with myeloma. These interactive programs are available for free at the Mind and Body Experience website.
-    Sponsor participation exceeded expectations with their active engagement in social media.
-    In China, a series of myeloma lectures were produced and were available for viewing in real time and as replay videos.
-    In Hong Kong, a program introducing myeloma to the public was produced and aired locally.
-    In South Korea, a series of events were carried out throughout Myeloma Action Month. The Korean Blood Disease & Cancer Association (KBDCA) produced a video where patients asked Dr. Ki-hyun Kim of the Korean Multiple Myeloma Working Party (KMMWP) various questions related to multiple myeloma treatments. The KBDCA also produced a collection of online videos, which featured myeloma patients in various themes. The videos are available on YouTube via the KBDCA channel.
-    In Italy, Associazione Italiana contro le Leucemie, linfomi e mieloma Onlus (AIL) — an organization which works to raise public awareness of the fight against blood diseases — held a patient webinar on March 28.

Thanks to the kind and generous contributions of individuals and groups, the IMF is delighted to announce that 2022 Myeloma Action Month made an enormous difference in building a powerful mosaic of activity for every myeloma patient, caregiver, nurse, doctor, and advocate — thus, fortifying the myeloma community’s collective hope, understanding, and resilience.

View the press release on PRNewswire