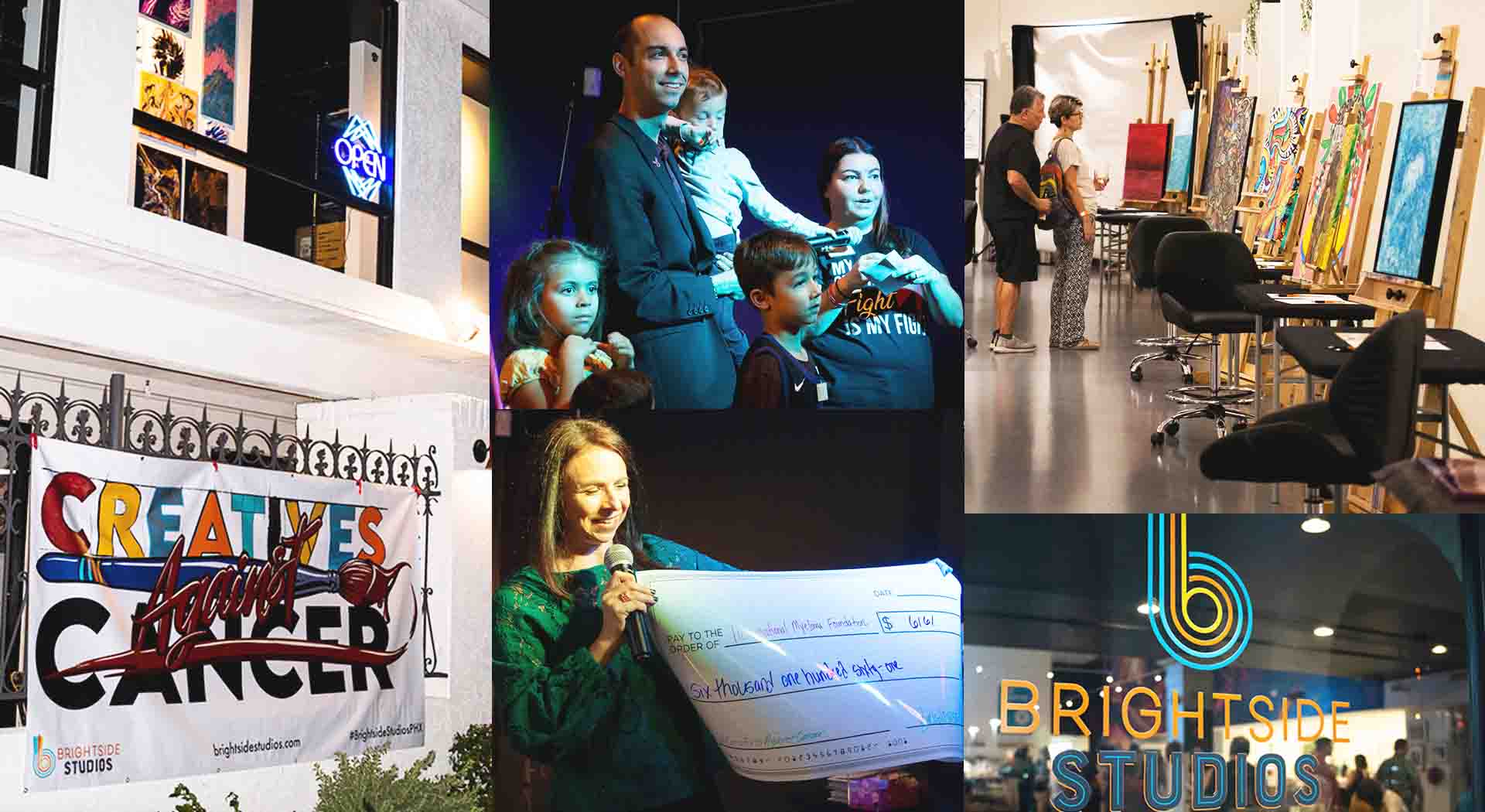 The Creatives Against Cancer fundraising event was held on Saturday, October 8 at Brightside Studios in Phoenix, AZ. Organized by Brightside Studios owners Brad and Vanessa Kuenn, along with Brad’s sister Hillary Kuenn, the event was able to raise $6,161, with proceeds benefiting the International Myeloma Foundation (IMF). This is the first time the Kuenns have held a fundraising event for the IMF.

Brad and Vanessa always dreamed of being able to “give back in a big way” and “believe that Phoenix creatives could positively impact the local community.”

“As artists, we understand the need for Phoenix creatives to express themselves without fear or encumbrance. Brightside encourages greater creativity and expression with a space aimed to generate creativity, collaboration, and inspired connection,” said Brad and Vanessa in their donate page.

In August 2020, while in the middle of constructing Brightside Studios, Brad was diagnosed with multiple myeloma.

“My wife and I were terrified, as I believe most feel with the initial diagnosis. So many questions; so many tests; so much to learn. Where do we start? Our relationship with multiple myeloma began years earlier with my grandfather unfortunately succumbing to the cancer in 2008. We were unaware of the latest treatment options and felt like we just received a death sentence.”

“Only after meeting with IMF Chief Medical Officer Dr. Joseph Mikhael did we feel a sense of hope—a belief that although the battle would be hard—we could do this. I would be able to see my boys grow up, spend my best years with Vanessa, and live the life I had envisioned for myself,” said Brad.

His sister, Hillary, expressed her feelings about Brad’s diagnosis: “To put into words how I felt, or continue to feel, regarding Brad’s diagnosis is difficult. It is an extremely complex emotion that I can’t describe in one word. Initially, I would say that I felt helpless and powerless. Brad and I have always been incredibly close, from childhood to adulthood. Despite being in our 30s, married and with children, I still feel the need to protect and care for him. I feel there is not enough I can do to be helpful, supportive, or attentive. I do my best to be intentional with our time together and to soak up all the small moments, with a few big ones in between.”

When asked about the challenges she came across during the course of Brad’s diagnosis, care, and treatment, Vanessa said: “I would say the hardest part for me was (and continues to be) the feeling of not being able to help him feel better. As his wife, I like to feel that I'm adding to his overall feeling of comfort and to his happiness, but a lot of times, there is very little I can do to help with that. Instead, I have learned when my presence is comforting enough and when there's little I can do aside from being there for him.”

“Another big challenge for me is feeling split between him and our two young boys. When Brad was diagnosed, our boys were 1 and 3 years old. They were at an age of needing me to help them with pretty much everything, so I rarely felt like I was able to give 100% to any of them (and still don't feel like I do). When Brad is having a day where he's not feeling well, I would love to be able to just completely focus on him and get him what he needs or wants, but I also have my little ones I have to take care of. It has taken time getting used to ‘there's only so much you can do’ and being okay with it,” she added.

As to when their relationship with the IMF started, Brad recounts: “Once diagnosed, we were directed to find a myeloma specialist. After some quick research, we found Dr. Mikhael located at an Honor Health facility in our city. Luckily for us, he was immediately responsive after we reached out, explaining the diagnosis. Within a couple of weeks, Dr. Mikhael and my oncologist had a plan to attack this disease.”

“I directly credit IMF and the wonderful team of doctors, researchers, administrators and more for extending my fight. Without them, I would not be here to give back in the first place.”

To give back to the community, the Kuenns decided to start Creatives Against Cancer to raise funds for the IMF. “The Kuenn family has always worked to find ways to support the community in a variety of different ways. We’ve been fortunate in so many aspects of life, we try to give back whenever we can. When brainstorming for fundraiser ideas, it was an easy decision to formulate a plan around our creative studio, local artists, and the IMF,” said Brad.

Creatives Against Cancer was able to exceed its original fundraising goal. Attendees at the event were treated to a spectacular evening which included live music performances, artisan and vendor booths, a silent auction, and a raffle of exciting prizes.

“There were so many wonderful moments from the event. But one that sticks out was a behind-the-scenes moment. Our amazing team at Brightside is packed with creatives, culinary artists, and musicians. Before we kicked off the fundraiser, we all met as a team in the kitchen—treating it as some sort of “hurrah” moment to get hyped and ready for the exciting night ahead.”

“Instead, I felt an overwhelming sense of appreciation. I was so thankful for my team at that moment. All the work they put in to make that fundraiser happen, expecting nothing in return, with only a willingness to help in the fight against this disease to help others, even if they didn’t know them directly.”

“As I scanned their faces, I saw the sincerity in their eyes. I saw how much they cared about Creatives Against Cancer; that it was bigger than all of us,” said Brad about the best moments of the fundraiser.

Will Creatives Against Cancer become an annual event? “Yes, absolutely. The success of our first fundraiser was just the tip of the iceberg,” responded Brad.

“The Brightside Studios family left with such a sense of excitement after the first Creatives Against Cancer fundraiser, we cannot wait to bring it back next October. We plan to bring the successes of this year and turn it up to 11. Our goal, as always, is to raise as much money as possible for the IMF—support all the other families enduring the fight and do our part in the search for the cure,” said Brad.

Brad and Vanessa have two young children, Noah and Arlo. Brad is hoping “to see Brightside Studios grow and support more artists, help more people, and see his boys come in, grab a coffee, some paint and a few brushes, and start laying down some color!”

The IMF is truly grateful to Brad, Vanessa, and Hillary for their efforts and kind generosity in helping the IMF fulfill its mission: improving the quality of life of myeloma patients while working toward prevention and a cure.