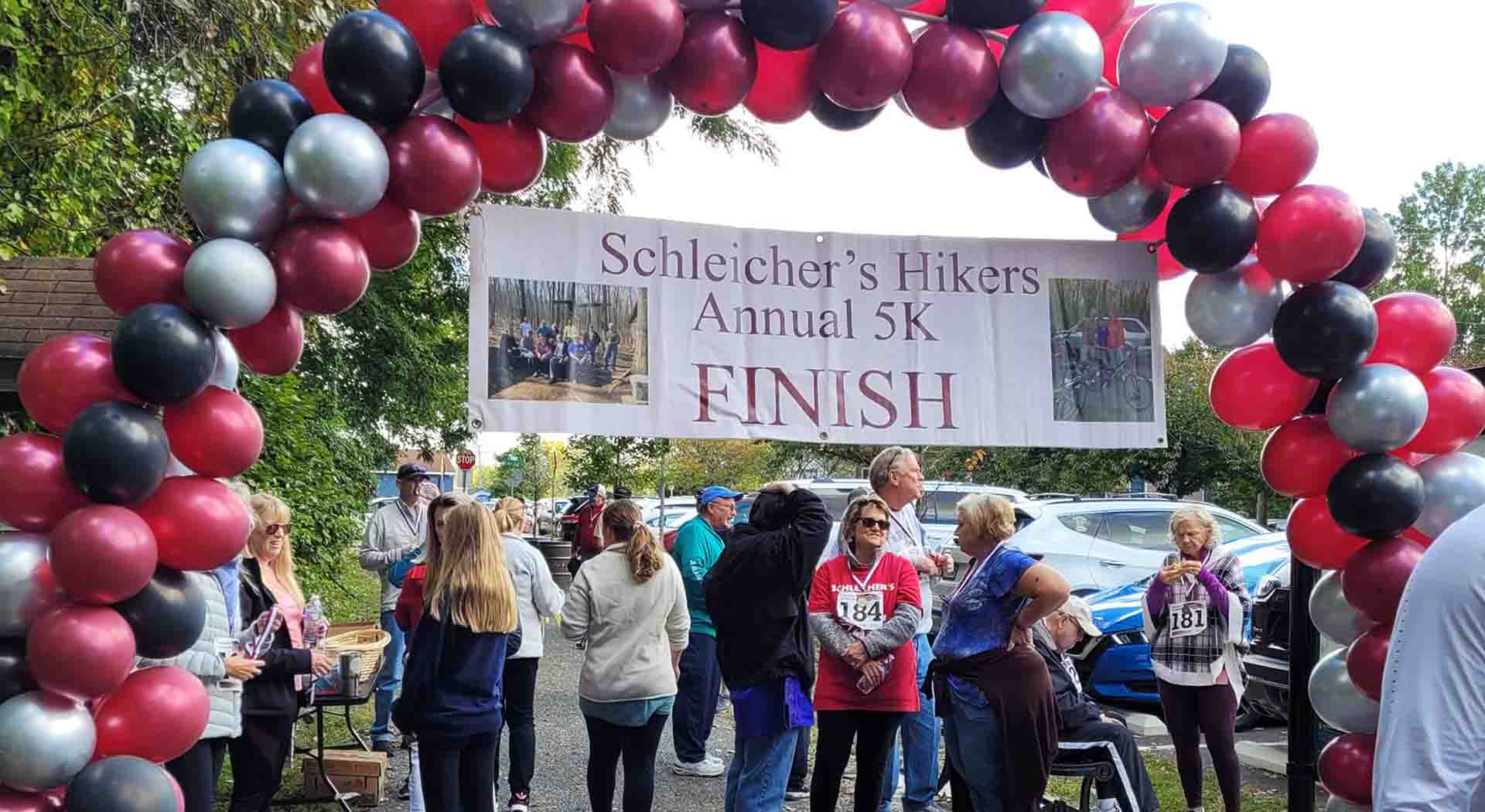 Since its inception in 2019, the Annual Schleicher’s Hikers 5K Walk/Run has been able to raise enough funds to support a junior grant for the IMF’s Brian D. Novis (BDN) Research Grants. The BDN Research Grant was established in 1995 to honor IMF co-founder Brian D. Novis, who succumbed to multiple myeloma in July 1992. The grants are awarded annually to promote research into all areas of myeloma to improve patient outcomes.

Jim and Bonnie attended their first IMF conference at the Fairmont Copley in Boston, MA in 2012 or 2013. “We had a great time, and it was very informative. We met lots of wonderful people there experiencing the same. We made connections with a few. We attended another one in Philly, and I don’t remember the year, but we had been going to support group meetings occasionally there. We did meet a couple we connected with and became friends with,” Bonnie narrated.

She recalled the first time they met Dr. Brian G.M. Durie and Susie Durie (the IMF’s co-founders) at one of the IMF conferences. “My husband actually had a 10-minute appointment with Dr. Durie at the conference. We had lots of hope back then. Unfortunately, Jim’s cancer was pretty aggressive,” said Bonnie.

The Schleichers were also regular attendees of the annual Miles for Myeloma 5K Run/Walk before they started their own in 2019.

“Jim loved the IMF and that was where he wanted to donate the funds when he started the 5K that he couldn’t finish,” said Bonnie. Sadly, Jim passed away on Sunday, October 6th—only a few days before the first Schleicher’s Hikers 5K Walk/Run took place on Saturday, October 12th.

“We celebrated his life the entire week and we continue to celebrate his life on the second Saturday of October every year since, with our 5K benefiting the IMF. We keep his spirit alive by celebrating his life leading up to the walk, during the walk, and at the after-party with family and friends. We reminisce lots of memories and share mostly funny stories of Jim. We always try to keep his spirit alive on a regular basis. As my son Jimmy said, ‘Mom, as long as we keep talking about dad, he’s alive in our hearts.’ Such a true statement. We try to keep his memory alive for his grandsons as well.”

“Jim was loved by everyone who knew him. He’s still celebrated the way he is because he was just an amazing human that I was fortunate enough to celebrate our 25th anniversary the year he passed. We had been together since December 1991 but had known each other since we were 13 years old. My sister is married to his brother, so we were friends for many years before we became a couple,” Bonnie continued.

Jim and Bonnie have a daughter, a son, and two grandsons. Their daughter, Ashley, was a Harford County teacher for 11 years and is now in her second year as an Assistant Principal for Baltimore County Public Schools in Baltimore County, MD. She has two young sons, Jonathan Jr. (JP) and Brooks Anthony, and is expecting her third child in April 2023 to complete the family.

Jimmy Jr. works for the Washington Post and sings karaoke songs with panache—just like his dad. He is engaged to Halli Bronstein and the Schleichers are looking forward to the couple’s wedding in 2024. Halli’s family actively supports and participates in the Schleicher’s Hikers 5K Walk/Run every year.

Jim’s sister, Joy, described her brother’s courage and resilience throughout his ordeal. “My brother waged his battle with dignity and fortitude. Jim will truly be remembered as a role model to his family and friends and as a shining example of a life well-lived. Jim remained positive throughout the painful ordeal of years of chemotherapy, two stem cell transplants and multiple courses of radiation and was one of the strongest people around. He cherished his family and friends, and we will make his memory a blessing through this annual 5K.”

“As Jim’s family and friends, we remain committed to raising funds for myeloma research until a cure is found,” Joy emphasized.

The Schleicher’s Hikers 5K Walk/Run is held every year on the second Saturday of October. The IMF is truly grateful to the Schleicher family and to Ravens Roost #74 for their kind generosity, for their continuing support of myeloma research, and for helping the IMF fulfill its mission: improving the quality of life of myeloma patients while working toward prevention and a cure.