This past weekend, "60 Minutes" focused on the high cost of cancer drugs. Although the discussion centered on treatments for colon cancer and chronic myelogenous leukemia, it is an across-the-board problem. Lesley Stahl interviewed experts at Memorial Sloan Kettering Cancer Center about the very high cost--$11,000 a month--for a new drug, Zaltrap, to treat colon cancer, versus $5,000 a month for a very similar drug, Avastin. The prolonged survival benefit of 1.4 months did not seem to justify the doubled cost. After a New York Times op-ed that made this point was published, Sanofi, the manufacturer of Zaltrap, immediately agreed to cut the cost in half! This rapid reaction prompted a chain of other reactions revealing the complexities involved in determining current cancer drug pricing.

The basic problem is that many new cancer drugs cost approximately $100,000 a year, and patients may need to take more than one at a time. Few patients can pay such costs directly. This is where the complexity starts. Prices, drug manufacturers argue, are linked to development costs that often amount to several $100 million to as much as $1 billion.

Dr. Hagop Kantarjian from MD Anderson Cancer Center in Houston takes issue with this argument. He examined the costs for the spectacularly successful drug Gleevec, to treat and control chronic myelogenous leukemia with indefinite, continuous use. The cost for Gleevec in 2001 was $28,000 a year. The development costs were recouped within the next decade. The Novartis Corporation has now earned a total of approximately $45 billion from Gleevec alone. The problem is that the cost of Gleevec is now $92,000 a year. What justifies that increasing cost over time? And what justifies the fact that patients in the US routinely pay 40-80% more for their drugs than do their European, Canadian and Australian counterparts?

The major justification offered by a representative of the pharmaceutical trade group on "60 Minutes" is that continued expensive research and innovation are required to develop new and better drugs. Who should pay for that innovation? Certainly not desperate cancer patients who are struggling to pay for lifesaving therapies.

After watching the interviews on "60 Minutes" I concluded that a financial structure that allows pharmaceutical firms to recoup the original investment and rewards them for their risk is fine. The system, however, must price those lifesaving drugs in a way that respects the needs of patients. I believe that the funding of additional and new innovation should be the focal point of a separate dialogue: How can we reduce drug costs and also make drugs available in a more realistic fashion in the global marketplace?

An honest dialogue would require all parties to come to the table - patients, manufacturers, legislators, government entities such as Medicare (which currently, by law, must pay full price for drugs), large hospitals and clinic groups (which negotiate discounts), insurers, and physician care providers (who are largely caught in the middle of complex buying arrangements). This must not be a blame game. Faced with an explosion in cancer drug costs, I believe there is enough momentum to find equitable solutions.

Any ideas for solving this problem will be most welcome and, perhaps, can initiate the necessary dialogue. A starting point for the conversation on behalf of myeloma patients might be our next International Working Group (IMWG) Summit, where we can invite all concerned parties to address this issue. 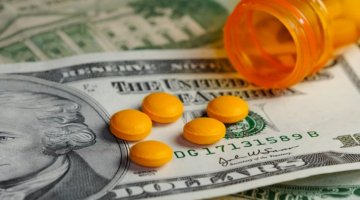 What Is the Solution for the Rising Cost of Cancer Drugs? 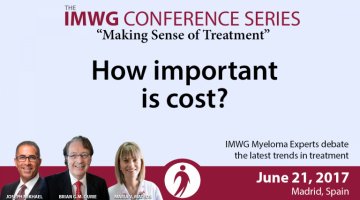