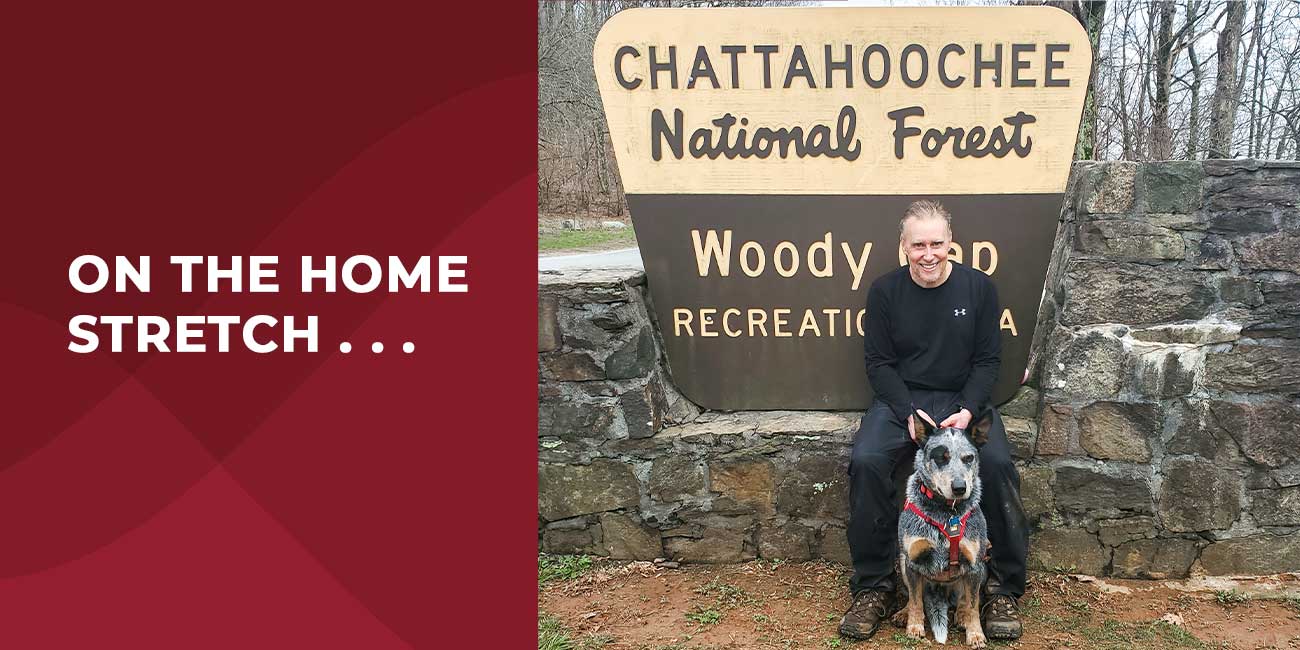 Man Who Loses Father to Multiple Myeloma Hikes 2,200 Miles to Support Research to Find a Cure

LOS ANGELES, Calif., August 26, 2021 –In his book “A Walk in the Woods,” about hiking the Appalachian Trail, Bill Bryson writes, “There is a phenomenon called ‘Trail Magic,’ known and spoken with reverence by everyone who hikes the trail, which holds that often when things look darkest some little piece of serendipity comes along to put you on a heavenly plan.” For the International Myeloma Foundation, Bill Hatfield’s Hike to raise funds for a cure for myeloma is just that little piece of serendipity.

To celebrate his 60th birthday, Hatfield began his hike in 2020 with his Australian cattle dog Huckleberry (who Hatfield describes as “a dog of strong character and questionable intelligence”). Shortchanged by the pandemic, Hatfield and Huckleberry had to return to his home in Topsfield, Mass., to shelter with his wife Toni and son Ian.

But after being vaccinated, Hatfield set back on his mission on April 17, 2021, to hike the trail and raise money for the International Myeloma Foundation (IMF) along the way.

The IMF caught up with Hatfield on Tuesday, August 17, 2021, and learned he had reached mile 1,886. Though nursing intense knee pain, Hatfield continues to chug along, saying, “You wake up every day and you have an opportunity to do something for someone else in life. And this hike isn’t just for me, I also have a chance to raise funds.”

The research and patient advocacy organization is immensely grateful to Hatfield for his 2,200-mile journey on foot, which will reach its end on September 11, 2021. The timing could not be more fitting as the IMF is raising myeloma awareness as part of September’s Blood Cancer Awareness Month.

Until he reaches the end of the trail, the IMF asks that donors consider donating through the fundraiser’s website: Hatfield Hike for a Cure. Visitors to the site will learn that Hatfield organized the event in memory of his father, Billy Hatfield, who succumbed to multiple myeloma just two weeks shy of his 47th birthday.

Not only has Hatfield been impacted by the loss of loved one to the incurable blood cancer myeloma, but he has also spent his career working in drug development on myeloma therapies such as Velcade® and Xpovio®. Hatfield says he is motivated to give back to the International Myeloma Foundation because, “The IMF is deeply involved with the development of these and many other treatments, with the goal of achieving a cure!”

Hatfield asks that readers cheer him on as he reaches the home stretch of the Appalachian Trail over the course of the next three weeks, and if you can, donate to either the International Myeloma Foundation or the CCHS Network, or both. The CCHS Network is a family-run organization that provides information and support to families with children born with congenital central hypoventilation syndrome (CCHS). Hatfield’s son Ian, who is now 31, was born with CCHS.
The International Myeloma Foundation invites you to follow Bill Hatfield’s journey at the interactive map and consider donating today. The IMF also invites all to visit https://www.myeloma.org/blood-cancer-awareness-month to learn how to take action this Blood Cancer Awareness Month.

ABOUT MULTIPLE MYELOMA
Multiple myeloma is a cancer of the bone marrow plasma cells -- white blood cells that make antibodies. A cancerous or malignant plasma cell is called a myeloma cell. Myeloma is called "multiple" because there are frequently multiple patches or areas in bone where it grows. It can appear as both a tumor and/or an area of bone loss, and it affects the places where bone marrow is active in an adult: the hollow area within the bones of the spine, skull, pelvis, rib cage, and the areas around the shoulders and hips.

ABOUT THE INTERNATIONAL MYELOMA FOUNDATION
Founded in 1990, the International Myeloma Foundation (IMF) is the first and largest foundation focusing specifically on multiple myeloma. The Foundation's reach extends to more than 525,000 members in 140 countries worldwide. The IMF is dedicated to improving the quality of life of myeloma patients while working toward prevention and a cure by focusing on four key areas: research, education, support, and advocacy. The IMF has conducted more than 250 educational seminars worldwide, maintains a world-renowned InfoLine, and in 2001, established the International Myeloma Working Group (IMWG), a collaborative research initiative focused on improving myeloma treatment options for patients. In 2012, the IMF launched the Black Swan Research Initiative®, a groundbreaking research project aimed at curing myeloma. The IMF can be reached at (800) 452-CURE (2873). The global website is www.myeloma.org. Follow the IMF on Twitter @IMFmyeloma.