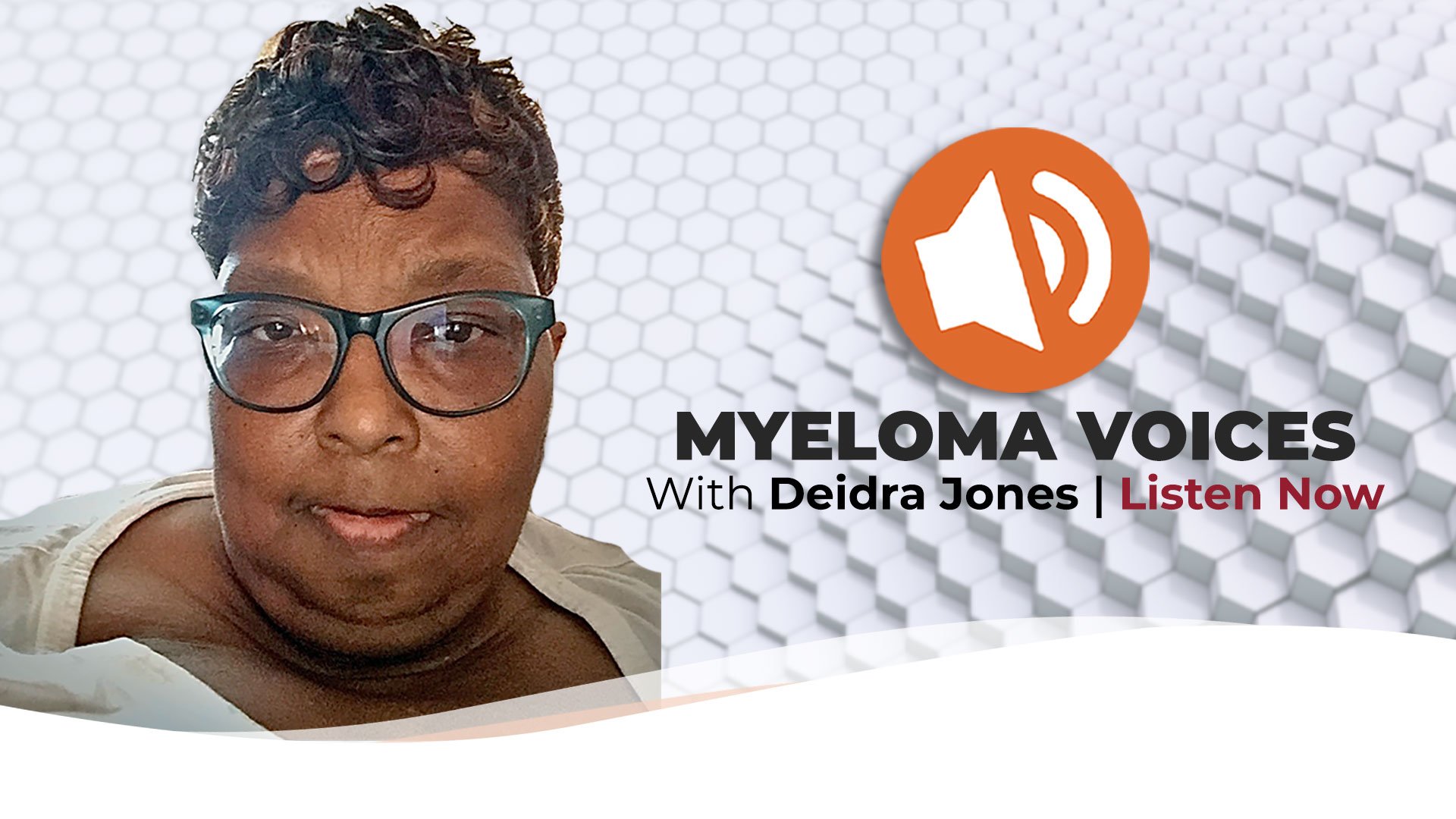 Deidra Jones talks about her myeloma diagnosis, coping with both congestive heart failure and multiple myeloma, undergoing treatment with Velcade and a clinical trial with venetoclax, as well as becoming an IMF Support Group Leader.

In this Myeloma Voices interview, Deidra Jones says “Not knowing the outcome of this particular disease, you don't know day-to-day what's going to happen. You don't live for the cancer, but you live as if it never happened. . . I don't let it control me. I just go on with my daily living and do what I need to do.” Listen now to her full story.

What really got me to get to go to the hospital and to be admitted to find out what was actually going on was the actual events of thinking I was having a heart attack.  Once I got into the emergency room, the doctor said that they were some irregularities in my heart. She wants to send me home but I refused to go  home. I said no, I'm going to find out what's going on because I had been in the hospital-- Well, not the hospital but the ER three times prior to going the last time. Each time they sent me home with different diagnosis.

They put me in the hospital and the heart ultrasound found out that I had congested heart failure. I was in the hospital or about three days and they were treating me for the congestive heart failure. They also noticed that there was irregularities in my blood work. My daughter being in medical school at that time talked to my doctor upon discharge and he was telling her about my blood work. She said, "We'll test my mom for multiple myeloma." Well, that time, I did not want to be-- [laughs]  fearing I had cancer [chuckles] because I was dealing with a congested heart failure, that was enough.

When I got out, I went to the doctor, they did a bone marrow. That's when they found out that I did have the multiple myeloma.

Deidra: At that time, he started me on VELCADE shots. I did those for about 18 months and then I went into relapse with it. At that time, the doctor was beginning to do a clinical trial for venetoclax, and he wanted to see how it affects multiple myeloma patients. He said that I have what they call t(11;14). I was not exactly sure of it, and I had to do a lot of research on it.

Currently, I'm still on remission. I finished, what is it? The infusion treatments, I finished that in June 2018. I finished that. Now, I'm just on the maintenance part of the venetoclax, which I take four 100 milligrams daily, as well as other medications for my high blood pressure, for the congestive heart failure.  Basically, I had no side effects from that. The other side effects that I had was from the VELCADE. It caused my stomach to itch a lot and to peel, but as far as being on the venetoclax, I have had  no side effects from that whatsoever.

I was the first African-American to try this clinical trial. I have gone to Kirklin Clinic of UAB here in Birmingham and like I said, I've been going to this particular doctor since 2015. It's been a blessing being on this medication really. I have had other people who have been on this medication, they said they have had  some type of symptoms from it, but I myself have had none.

Deidra: After I got out from being treated for the congestive heart failure, I was at that time had moved in with my sister. For some reason, I had developed a lot of nausea. I was really lethargic. I was very dehydrated. It was to the point where I just couldn't even hold my head up. It took my sister and her husband to get me to the hospital at that time.

When they got me to the hospital, the doctor told them that had I not gotten to the hospital at that time, I wouldn't be here. It was like my body was-- I wouldn't say it was rejecting the medication but I think it was not-- How can I say it? It was not enough there to keep my body functioning. My body for some reason stopped functioning. I don't know what it was that was causing me not to function normally like I was supposed to.

Earlier Experience with Cancer before MM

Deidra: Since then, I have had no problems. I've been able the function normally. I'm able to drive myself around. With the COVID now, I'm not able to get out like I would want to, but I do get out. I'm able to drive again. As a matter of fact, I'm a two-time cancer survivor not just one, two. Back in 1993, I had a brain tumor that they found on the left hemisphere of my brain that was affecting the right side of my body.

Interviewer: Good for you.

Deidra: Yes, I do have some residual from that. I do have neuropathy in my feet as well as in my hands. I do have problems with my speech somewhat. Then I have very little short-term memory. It's not really noticeable, but it's like some time I'd been talking and then I'll forget what I'm saying, but other than that, that's fuzzy. It's something that I can control on my own. I don't have to have any type of therapy or anything like that to help me with that. I try to function and try to control it on my own.

Deidra:  Not knowing the outcome of what this particular disease that's going to occur, you don't know day to day what's going to happen, so you don't live for the cancer but you live as if your day, as if it never happened in your life because if you let it take over control of your life, then you're not going to live. I don't let it control me. I just go on with my daily living and do what I need to do. I can't work because of it, which is, in a way, a bummer, but I find ways to occupy my time.

Deidra Jones: In 2018, I became a support group leader for multiple myeloma that. . . . . I work one-on-one with my doctor, my oncologist, so he refers patients to me for my support group. I have two patient advocates that I work with. They also refer patients to me. Then I'm associated with the International Myeloma Foundation and I'm associated with  the Leukemia & Lymphoma Society. I work one-on-one with both of those as far as getting the word out about multiple myeloma.

Deidra Jones: Before the pandemic hit, like I said, I was starting to work with the Leukemia & Lymphoma Society. They're in the process of doing what they call Myeloma Link, which is working directly with the African-American community and getting the word out about multiple myeloma. We were going to set up meetings with different churches, different organizations in the Birmingham area to just go around and just pass out information and to talk one-on-one with congregations and people about multiple myeloma, like what it is, or just talking about the . . . . of it, what the symptoms are, as well as working with my support group.

Deidra: Originally, the guy we had, some person, before I took it over. He was turning us around IMF and he was telling us something we needed to get associated with that. At that time, I signed on for the newsletter and the little booklet that they send out every month. I signed on for that. Then, I started attending some of the seminars. I got to know a lot of the people in IMF and I became familiar with Nancy Bruno. She's my heart. We met one on one together, and she was telling me that she was the director of the area.

That's how I got to know Nancy more and started attending some of the seminars through her. The last one that I was able to attend was in Fort Worth and I really enjoyed that one, when we were down in Texas. I really enjoyed that one.  Then, like I said, she helped me with setting up the seminars here in Birmingham, as well. That's how I got familiar with Nancy Bruno and everybody.

Coping with the Pandemic

Deidra: It's a lot because like I said, I was so used to being out and going about, but now, I have to cover up to go to the grocery store, to go to the , not able to go to church because my church just shut down, but most churches are open, but ... going to a restaurant to sit down and eat. I miss the traveling. I can't travel like I want to because of the pandemic. My daughter, she lives in Baltimore so she's not able to come down and see me like she wants to because of the pandemic and …. my family like I'm used to seeing them because we would do get-togethers almost every week where we would either go out to eat or maybe just gather at one of my cousin's house and do stuff. We can't even do that anymore because of the pandemic. It's like being on punishment. It's a lot [laughs]

What the IMF Means to Me 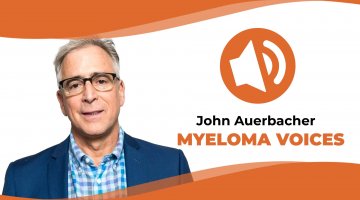 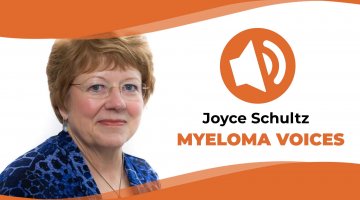