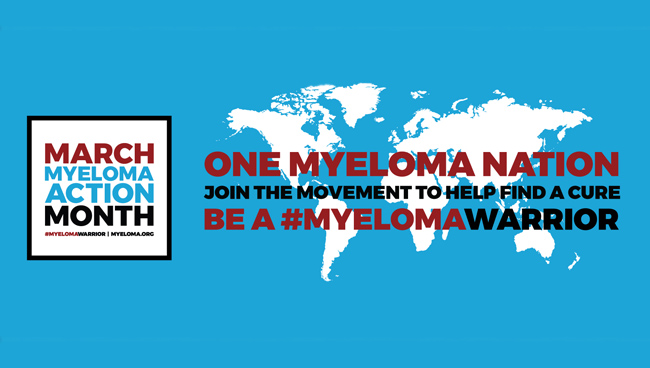 NORTH HOLLYWOOD, CA, February 14, 2019— The International Myeloma Foundation (IMF) is harnessing the power of myeloma patients, their families, and the myeloma community at large to raise awareness of the disease during Myeloma Action Month (MAM), starting March 1, 2019. In 2009, the IMF was the first organization to declare March as Myeloma Awareness Month. The organization elevated the campaign in 2016 to Myeloma Action Month to encourage a more dynamic, proactive approach.

This year’s proactive approach is highlighted by YOU—Myeloma Warriors. As Dr. Brian G.M. Durie, the IMF’s Chairman of the Board, explains in his “Ask Dr. Durie” video series, a myeloma warrior is a patient, caregiver, friend, or healthcare provider who has a “broad view about myeloma—not just for yourself, but for others in the myeloma community. This broader view is really the hallmark of a warrior.”

With this in mind, the IMF is asking individuals and groups to spread myeloma awareness on a global scale by using the hashtag #myelomawarrior on all social media channels. When using this hashtag to share stories on Twitter, Facebook, Instagram, and Pinterest, these #myelomawarrior posts will stream to the IMF’s “Wall of Warriors” at the Myeloma Action Month website http://mam.myeloma.org. This website also houses shareable graphics that participants can post on their social media channels.

Also available on the website are signature Myeloma Warrior-branded merchandise, including T-shirts, sweatshirts, coffee mugs, wristbands, and hats. The IMF invites everyone to take selfies dressed in these colorful items and post them to their social media channels. Even the simplest action to raise myeloma awareness goes a long way.

Susie Durie, President and CEO of the IMF said, “It’s imperative that we keep myeloma patients around the world up to date on the advances that are happening in myeloma. The IMF is proud that we have brought together doctors and researchers from around the world to work and collaborate together to find a cure. We’re grateful that IMF is able to fund these research projects thanks to our many donors, and to date have funded 40+ research projects around the world. These projects are the largest-scale myeloma studies ever conducted. They include – iStopMM in Iceland, and the ASCENT trial, which is currently accruing in 12 sites in the U.S.”

How can you get involved this Myeloma Action Month?

Multiple myeloma is a cancer of the bone marrow plasma cells. Plasma cells make antibodies against infectious agents such as viruses and bacteria. A cancerous or malignant plasma cell is called a myeloma cell. Myeloma is called “multiple” because there are frequently multiple patches or areas in bone marrow where it grows.

ABOUT THE INTERNATIONAL MYELOMA FOUNDATION
Founded in 1990, the International Myeloma Foundation (IMF) is the first and largest foundation focusing specifically on multiple myeloma. The Foundation’s reach extends to more than 525,000 members in 140 countries worldwide. The IMF is dedicated to improving the quality of life of myeloma patients while working toward prevention and a cure by focusing on four key areas: research, education, support, and advocacy. The IMF has conducted more than 250 educational seminars worldwide, maintains a world-renowned InfoLine, and in 2001, established the International Myeloma Working Group (IMWG), a collaborative research initiative focused on improving myeloma treatment options for patients. In 2012, the IMF launched the Black Swan Research Initiative®, a groundbreaking research project aimed at curing myeloma. The IMF can be reached at (800) 452-CURE (2873). The global website is www.myeloma.org. Follow the IMF on Twitter @IMFmyeloma.