On December 3rd, the IMF awarded its 2017 Brian D. Novis Research Grants. The grant presentation ceremony was held during the 58th annual meeting of the American Society of Hematology (ASH) in San Diego, California.

For 22 years, the IMF has funded the most promising research in the field of myeloma by leading investigators from institutions around the world. The IMF is proud to support these important projects. In 2017, three Senior Research Grants are being funded at $80,000 each, and five Junior Research Grants are being funded at $50,000 each. These grants are made possible through generous donations from private individuals as well as the proceeds from the IMF’s Member Fundraisers program. We are eternally grateful to all who support the Brian D. Novis Research Grants that move us closer to a cure. 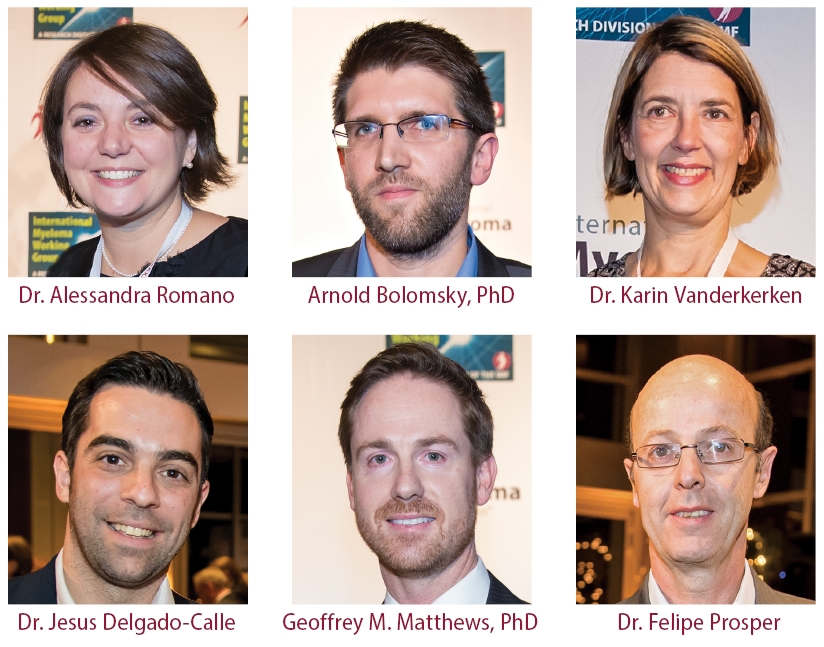 The reception was attended by 135 enthusiastic guests who filled the reception hall to capacity. The event created a perfect setting for interaction between the award-winning researchers and the donors who help fund their projects. In several cases, this was the first opportunity for a grant recipient to meet and talk with myeloma patients.

Four of the patients in attendance shared their stories with the guests. In addition, wildlife and conservation filmmaker Hardy Jones sent his speech via video. His powerful “we are all interconnected” message included the story of his discovery that the dolphins he worked with had myeloma. Hardy then learned of his own myeloma diagnosis. Pat Harwood touched everyone’s hearts as she spoke about her determined 20-year journey of living with myeloma, despite being widowed 10 days out of transplant and becoming the only parent to her son. Pat’s “myeloma doesn’t define me” attitude resonated throughout the room. Next, Brian Strickler offered his sincere gratitude to all who are working so hard towards a cure, giving him and other newly diagnosed myeloma patients hope for “a path forward.”

Yelak Biru concluded the patient stories with a moving speech that did not leave a dry eye in the house. Diagnosed while in his first semester of graduate school and newly married, Yelak’s story “is still in the making” 21 years later.

As always, the names of the grant recipients as well as the IMF members who are funding each research project were announced by Dr. Robert A. Kyle. The impact upon the researchers of meeting the people who made their work possible was profound, and Dr. Vanderkerken’s remark that meeting myeloma patients will fuel her to work harder was echoed by the other grant recipients.

Also in attendance at the event was Kristi Willette of the Willette Charitable Foundation. Earlier that week, she presented Susie Novis Durie (IMF President) and Dr. Brian GM Durie (IMF Chairman) with the first installment of a three-year grant in the amount of $300,000 to support the IMF’s Black Swan Research Initiative® (BSRI®) led by Drs. Durie, San Miguel, and Rajkumar. We’re so grateful to Kristi and the Willette Charitable Foundation for their vision and continued generosity in support of myeloma research.

“I never doubted that bringing the myeloma community together will lead to a cure, and a cure is right around the corner.” said Susie Novis Durie.