Come on, Irene: Despite the hurricane's approach, the show must go on! 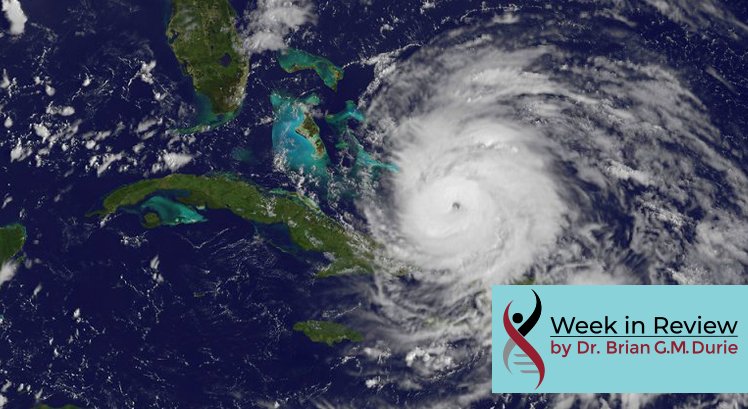 Last weekend, the IMF held our fourth and final Patient & Family Seminar of the year in Philadelphia, PA. We had an uninvited guest make her presence known in the form of Hurricane Irene. As they say, "necessity is the mother of invention," so we came up with an abbreviated schedule with the intention of ending early and getting everyone on their way home before the storm hit.

So, yes, we did end up with a smaller and shorter seminar than had originally been expected, but something rather large came out of it anyway. During the Friday night dinner, the Philadelphia Multiple Myeloma Networking Group presented a $48,000 check to the IMF from the proceeds of their 3rd Annual Miles for Myeloma 5K fundraiser. This brings the total amount raised by this annual event to $200,000 toward research programs for the IMF!

In addition to the check presentation, the Philadelphia group announced that they had recognized a local doctor, Dr. Dan Vogl, with the "Brian Durie Humanitarian Award" earlier this year. I am honored that the group has decided to continue recognizing people who make a great impact on the lives of myeloma patients in their area. Dr. Vogl cares so deeply for his patients that he has voluntarily undergone a bone marrow biopsy so that he could experience what his patients feel firsthand.

At this point in the program, Susie Novis spoke about the IMF's Brian D. Novis Research Program, which awards grants of $50,000 or $100,000 to Junior and Senior level investigators in the field of myeloma research. Over the years, the IMF has awarded more than $4 million to these research projects, and many have gone one to receive further funding from other prestigious institutions.

The 2011 deadline for the Brian D. Novis Grant applications was on August 1st, and we at the IMF were pleased to see that the program's reputation had grown to the point that we had more qualified applications than we have ever received in IMF's history!

The pledging continued until Doug Farrell stood up and offered to pledge $500 if we allowed him to sing.  Earlier in the evening, we had mentioned the Farrell's annual "A Song For Ireland" fundraiser which has become quite successful over the years. We always welcome a chance to hear him sing in person, and he did not disappoint. Doug led a rousing sing-along rendition of "High Hopes" which ended in a fabulous round of applause.

It happened rather quickly, but we tallied that more than $10,000 was pledged that night. Along with the Philadelphia Networking Group's check presentation of $48,000, we were well on our way to funding a Senior level grant!

Despite the weather, the cancelled flights, and the east-coast evacuations, the IMF was able to hold a slightly altered but still very informative seminar in Philadelphia this year. For those who were able to make it there, we thank you for your understanding and patience as we all scrambled away to catch the last flights out of the airport before they shut down. For those who were unable to attend because of the hurricane, we hope that you will consider applying your registration fee to one of our four seminars coming up in 2011.

And to those who not only made it to the seminar, but also stood up to make a contribution, thank you for helping us do our best to find the cure for myeloma.