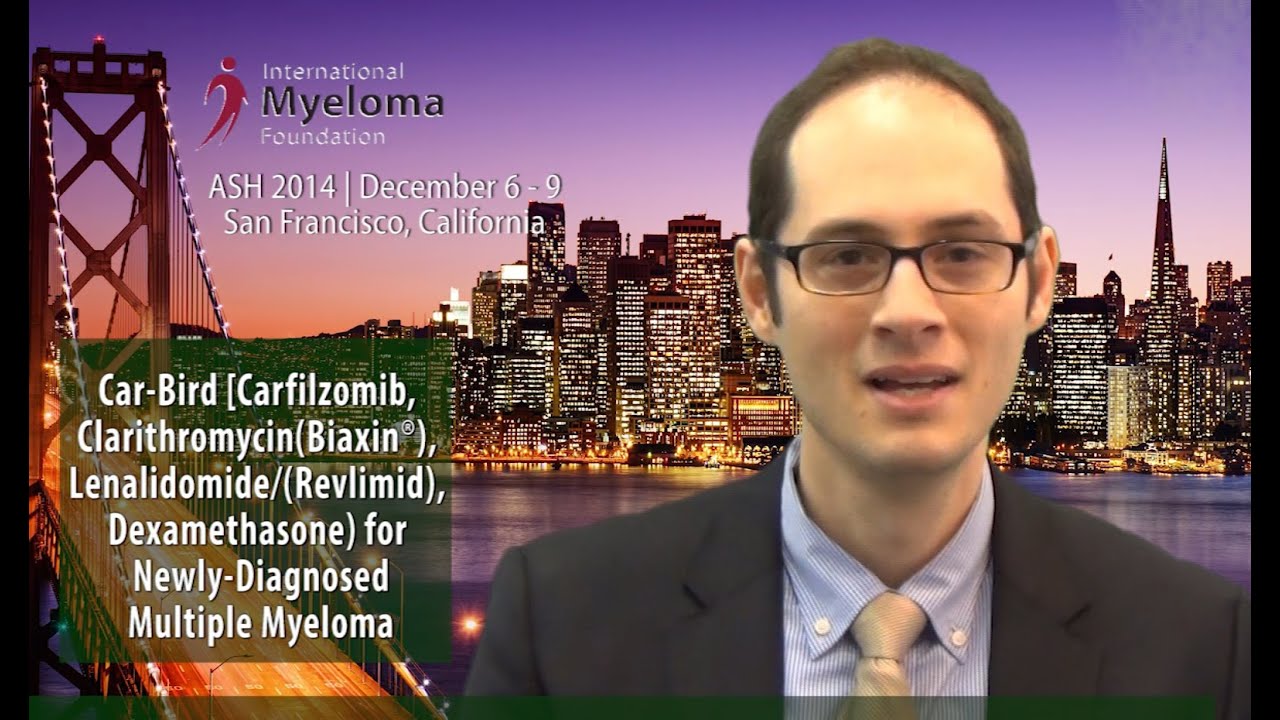 Background: Carfilzomib (Cfz), lenalidomide, and dexamethasone synergize to provide an impressive overall response rate (ORR) in upfront treatment of multiple myeloma (MM) (Jakubowiak et al 2012). The ORR to Cfz+dexamethasone(Cfz-Dex) as first-line therapy is unknown. We hypothesized that sequential treatment with Cfz-dex and BiRD would improve provide similar ORR and improve tolerability. A protocol of Cfz-Dex, consolidation with BiRd(Clarithromycin(Biaxin¨), Lenalidomide/(Revlimid¨), dexamethasone), and lenalidomide maintenance (Len) was conducted to evaluate ORR and safety as induction therapy for MM.

Methods: Forty patients (pts) with symptomatic untreated MM were enrolled in a phase 2 study of Car-BiRd. Car-BiRdtherapy is: Cfz IV over 30 min on Days 1, 2, 8, 9, 15, 16 of a 28-day cycle at a dose of 20mg/m2 on days 1, 2 of the 1st cycle only and 45mg/m2 for each dose thereafter and dex 40mg on D1, 8, 15, 22. After the first 26 pts were enrolled, the protocol was amended to increase the Cfz from 45 to 56mg/m2. Echocardiography and spirometry were performed prior to study entry and serum brain natriuretic peptide (BNP) was followed monthly to evaluate for heart or lung toxicity. Cfz-dex was continued until plateau in disease response, defined as unchanged M-protein for 2 cycles.  Elective stem cell collection was then performed in transplant eligible pts and consolidation with BiRd initiated. Transplant ineligible ptsproceeded directly to BiRd. BiRd is: Clarithromycin 500mg BID, lenalidomide 25mg daily on D1-21, and dex 40mg on D1, 8, 15, 22 of 28-day cycle. BiRd was continued until a 2nd response plateau after which lenalidomide maintenance (Len) at 10mg daily D1-21 of 28 day cycle was continued until disease progression or intolerability.

Results: 36 pts completed at least 1 cycle and were evaluable for response. 58% of pts were ISS II/III. High-riskcytogenetics and unfavorable MyPRS score were found in 62% and 21% of pts, respectively. Median study follow-up was 66.2 weeks (range 3.7-114.7). Maximum response to the Cfz-dex, BiRd, and Len is shown in Table 1. Median time to PR was 1 cycle. Median time to maximum response with Cfz-dex, BiRD, and Len was 2, 2, and 4 cycles respectively. At last audit, 8 (22%) pts remain on Cfz-Dex; 21 (58%) reached plateau and received BiRd. Of the pts that received BiRd, 9 (43%) improved categorical response and 19 (90.5%) received Len. Two (11%) pts deepened response to CR while on Len. 97.5% of pts are alive and 82.5% without progression at last follow-up. One pt died after coming off study (withdrew consent) from sepsis during elective autologous stem cell transplant. Pts with high risk cytogenetics had a trend towards a shorter progression free survival (PFS), with median 71.7 weeks vs not reached (NR) (P = 0.058). Similar results were seen with unfavorable MyPRS score with a shorter median PFS at 71.7 weeks vs NR (P = 0.094).

18 pts (46.2%) have come off study, 6 (15%) for disease progression (2 during CfzDex , 1 during BiRD, 3 during Len) and 5pts (12.5%) due to toxicity: 3 pts for renal failure [2 Grade 2, I grade 3, all with renal recovery after discontinuation, all attributable to Cfz]; 1 pt due to Grade III CHF [attributable to Cfz with recovery]; 1 pt with Grade III Thromboembolic [attributable Len]. There was no correlation between pre-study cardiac and lung function, or serial BNP, with toxicities. Seven (17.9%) pts came off study for noncompliance, lost to follow up, investigator discretion, or withdrew consent (Cfz-dex: 4, BiRD: 1, Len: 2).

Discussion: This is the first prospective study evaluating induction response to Cfz/Dex in MM. Cfz/Dex is safe and active, with ORR of 91.7% and rate of >=VGPR of 55.6%, despite the majority with a high-risk cytogenetics. Cfz-dex did not hinder stem cell harvest. ORR improved with lenalidomide-based consolidation and maintenance, with CR rate > 50%. Baseline heart/lung function or serial BNP change did not predict emerging toxicities.

Dr. Tomer Mark is the Clinical Director of the Plasma Cell Disorders program at the University of Colorado. Dr. Mark’s research focus is on the development of novel therapies for the care of multiple myeloma, including stem cell collection protocols and transplantation conditioning regimens. He is a member of the International Myeloma Working Group and co-chair of the plasma cell disease committee at the Center for International Blood and Marrow Transplant Research. Visit Dr. Tomer Mark’s full biography.

Efficacy and safety of the randomized phase 3 study of subcutaneous versus intravenous daratumumab administration in patients with relapsed or refractory multiple myeloma: COLUMBA