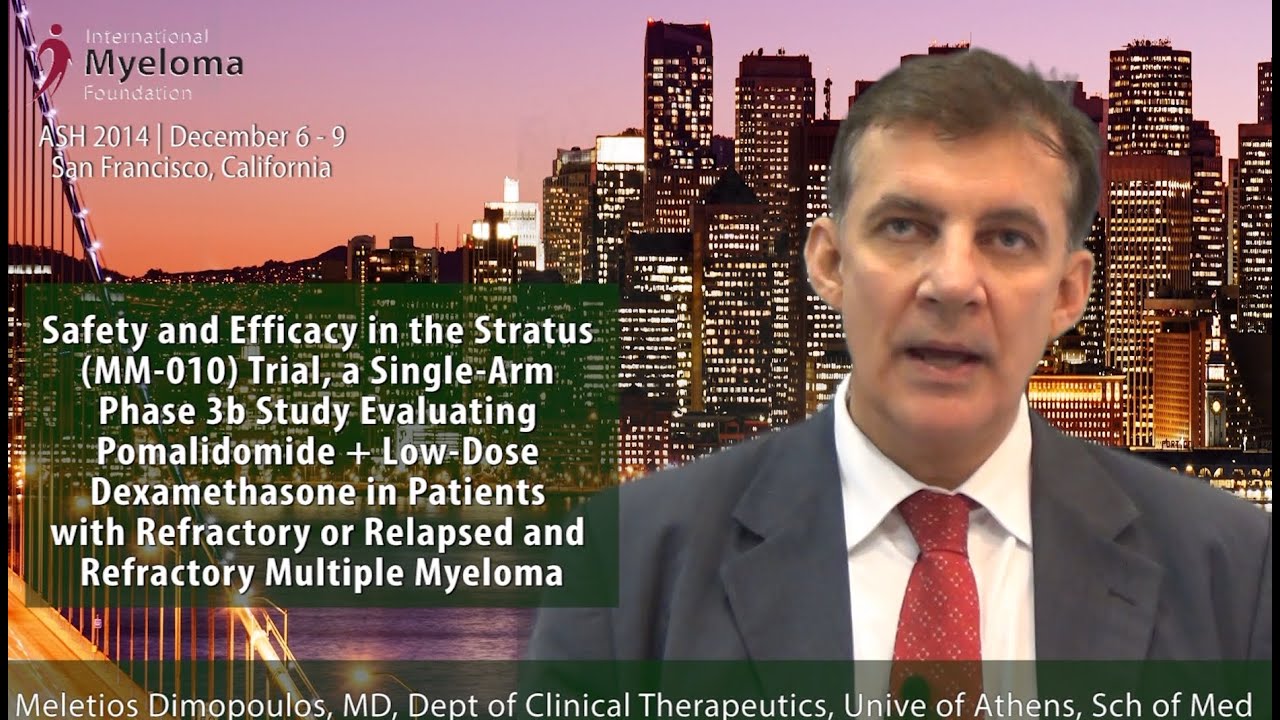 Safety and Efficacy in the Stratus (MM-010) Trial, a Single-Arm Phase 3b Study Evaluating Pomalidomide + Low-Dose Dexamethasone in Patients with Refractory or Relapsed and Refractory Multiple Myeloma

Background: Patients (pts) with multiple myeloma (MM) who have relapsed on or are refractory to treatment (Tx) with novel agents lenalidomide (LEN) and bortezomib (BORT) have few effective options for Tx and short overall survival (OS; Kumar, Leukemia, 2012). Pomalidomide (POM) is a distinct oral IMiDs® immunomodulatory agent with direct antimyeloma, stromal cell inhibitory, and immune modulatory effects (Quach, Leukemia 2010; Mark, Leuk Res, 2014). POM has been approved in the United States and the European Union for the Tx of pts with ≥ 2 prior Tx, including LEN and BORT, and progressive disease (PD) on Tx (EU, in combination with low-dose dexamethasone [LoDEX]) or within 60 days of completion of the last line of Tx (US). Results from the pivotal phase 3 MM-003 trial demonstrated that POM + LoDEX significantly extended progression-free survival (PFS) and OS vs high-dose dexamethasone in this pt population (San Miguel, Lancet Oncol, 2013). STRATUS is a multicenter, single-arm, open-label phase 3b trial with > 85 sites across Europe designed to further evaluate safety and efficacy of POM + LoDEX in a large pt population (N = 456 at data cutoff).

Methods: Eligible pts had refractory or relapsed and refractory disease (PD during or within 60 days of last line of Tx), previous BORT and LEN Tx failure, and adequate prior alkylator therapy as defined in study protocol. Pts must have been refractory to their last prior line of Tx. Key exclusion criteria included absolute neutrophil count < 800/μL , platelet count < 75,000 or < 30,000/μL (for pts with < 50% or ≥ 50% of bone marrow nucleated cells as plasma cells, respectively), creatinine clearance < 45 mL/min, hemoglobin < 8 g/dL, and peripheral neuropathy ≥ grade (Gr) 2. POM was administered at 4 mg D1-21 of a 28-day cycle in combination with LoDEX 40 mg/day (20 mg for pts aged > 75 yrs) on D1, 8, 15, and 22 until PD or unacceptable toxicity. All pts received thromboprophylaxis with low-dose aspirin, low-molecular-weight heparin, or equivalent. The primary endpoint was safety, and key secondary endpoints included POM exposure, overall response rate (ORR; ≥ partial response), duration of response (DOR), PFS, OS, and cytogenetic analyses. STRATUS is registered with ClinicalTrials.gov (NCT01712789) and EudraCT (2012-001888-78).

Conclusions: Results from STRATUS, the largest POM + LoDEX clinical trial thus far, were consistent with those observed in the pivotal MM-003 trial, and confirm that this regimen has an acceptable safety and efficacy profile and shows substantial improvements in PFS and OS benefits. Combination therapy with POM and LoDEX represents a new standard of therapy for pts with refractory or relapsed and refractory MM in whom LEN and BORT Tx failed.