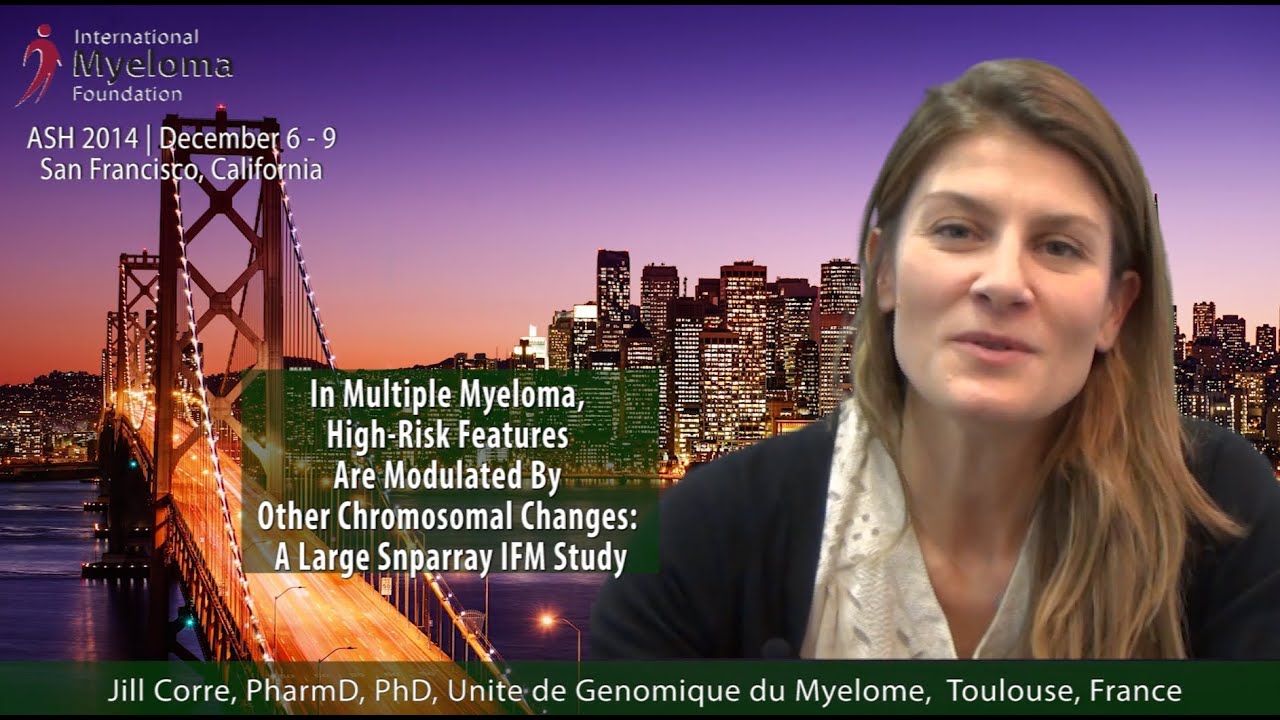 In Multiple Myeloma, High-Risk Features Are Modulated By Other Chromosomal changes : A Large Snparray IFM Study

In multiple myeloma, cytogenetic changes display important value for patients’ outcome. In this setting, the most important changes are the del(17p), and the t(4;14), conferring a poor outcome. However, a certain heterogeneity is observed in survival of these high-risk patients. We hypothesized that other chromosomal changes may impact the outcome. We retrospectively analyzed a large series of 242 patients displaying either the t(4;14) (157 patients), or the del(17p) (110 patients), 25 patients presenting both abnormalities, using SNP-array. The main advantage of SNParray analyses is that all the unbalanced chromosomal changes are analyzed, in contrast to FISH which informs only for the chosed probes. For t(4;14), 144 patients have relapsed, and 103 have died. The median PFS was 1.4 year, and the median OS was 3.5 years. The median beta2-microglobulin (b2m) level was 4.0 mg/L (range, 1.2-38.3). The distribution of ISS stages 1, 2, and 3 was 35.4%, 26.4%, and 38.2%, respectively. Based on FISH results, 31.2% of the patients presented the abnormal configuration with only one fused signal. In all these patients, SNP-array analysis showed a loss of the telomeric part of one chromosome 4. In contrast to previous reports on this particularity in which the explanation was a loss of the derivative chromosome 14,17,18 we clearly show here that this configuration results from an unbalanced translocation. In patients with t(4;14), del(1p32) (p<0.001), del(16q) (p=0.03), del22q (p=0.04) and more than 30 chromosomal structural changes (p=0.02) negatively impacted PFS. For OS, del(13q14) (p=0.01), del(1p32) (p<0.001), and the number of  chromosomal structural changes (p<0.05 and p=0.01 for [10;30[and more than 30 structural changes, respectively) worsened the prognosis of patients.

This study, which is the largest series of high-risk patients, analyzed with the most modern genomic technique, identified two main factors negatively impacting survival: del(1p32) and genomic complexity. Furthermore, we did show that 1/3 of patients with t(4;14) did not display upregulation of FGFR3 because of loss of the telomeric part of the chromosome 4. These patients do not present a better prognosis than those upregulating FGFR3, reinforcing the idea that FGFR3 activation is not important in the biology of the t(4;14).