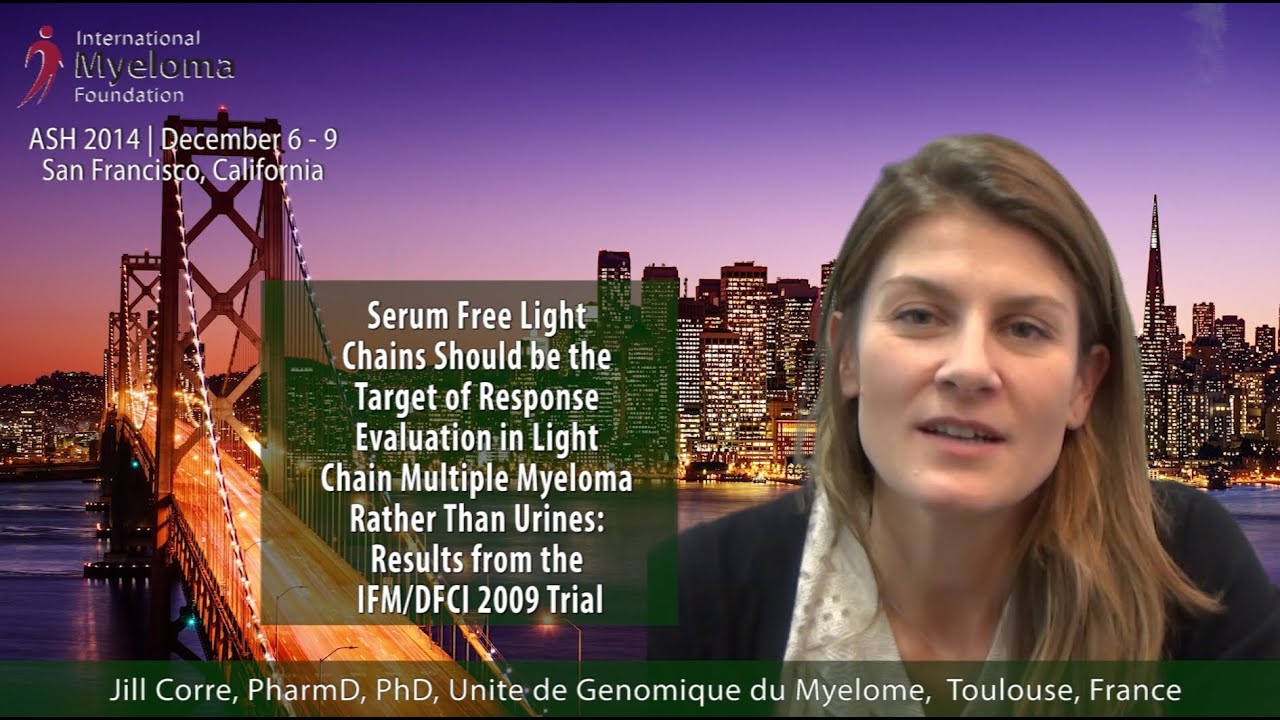 According to the IMWG criteria, evaluation of response in multiple myeloma (MM) is based on the measurement of the monoclonal protein in serum and/or urine. In patients secreting only light chains (LCMM), evaluation is based on the urine electrophoresis, and measurable disease is defined by the presence of > 200 mg/24h light chains in the urine. This definition and recommendation has several pitfalls. It is difficult to be sure that the 24 hours urines collection is complete, especially in elderly patients. Even if complete, evaluation of response is difficult, and may not reflect the response at the plasma cell level. Indeed, light chains are usually very rapidly cleared, and patients are in complete response (CR) after only a couple of chemotherapy courses. For now more than 10 years, free light chains can be measured in the serum (sFLC) using the Freelite® kit (The Binding Site, Birmingham, UK). We took advantage of the large cohort of patients enrolled in the IFM/DFCI 2009 trial (700 patients) to address the question of the usefulness of Freelite® in evaluating response.

The IFM/DFCI trial enrolled 700 patients in the IFM from 11/2010 to 12/2012. The trial randomized patients between arm A, 8 RVD courses, and arm B, 3 VRD courses, high-dose melphalan, 2 VRD courses. All patients did receive a one-year lenalidomide maintenance. We identified 115 patients (16.4 %) with LCMM, all patients presented with an abnormal sFLC ration and had measurable disease (>100mg/L) as described by the IMWG. All the patients were centrally evaluated for response at the end of the induction (3 VRD courses) with urine electrophoresis and serum FLC at this time, urine electrophoreses were negative in 88/112 patients (79%, 3 patients not evaluated). Based on sFLC evaluation, a normal ratio and/or normal kappa and lambda levels was observed in 58/112 patients (52%). Of note, the discordances were always in the group of patients with normal electrophoresis and abnormal FLC. In order to evaluate the speed of response on urine electrophoresis, we tried to collect the results performed locally in each IFM center after only one cycle of VRD. Data were available for 84 patients, 52 (62%) already presenting a normal electrophoresis. Finally, in order to verify that the response assessment by Freelite® was comparable to that observed in classical MM (IgG and IgA), we analyzed those patients who did present at diagnosis a sFLC excretion, as defined by > 100 mg/L. We did identify 331/585 patients in this case. Among them, 65/70 patients in nCR or CR presented a normal sFLC ratio and/or normal kappa and lambda levels. For patients in VGPR, 98/120 displayed a normal Freelite®. For patients in PR or less, only 29/141 presented normal Freelite®. Based on Freelite®, 58% of these classical MM presented a normal sFLC ration and individual FLC levels not statistically different from the 52% observed in LCMM.

In conclusion, we confirm here that response evaluation based on urine electrophoresis is not reliable because of a very rapid clearance of the LC in urines. In contrast, sFLC assessment is much more reliable, with response evaluations statistically similar to that observed in classical IgG or IgA MM. We propose to reevaluate the IMWG response criteria for LCMM incorporating the serum FLC assessments.