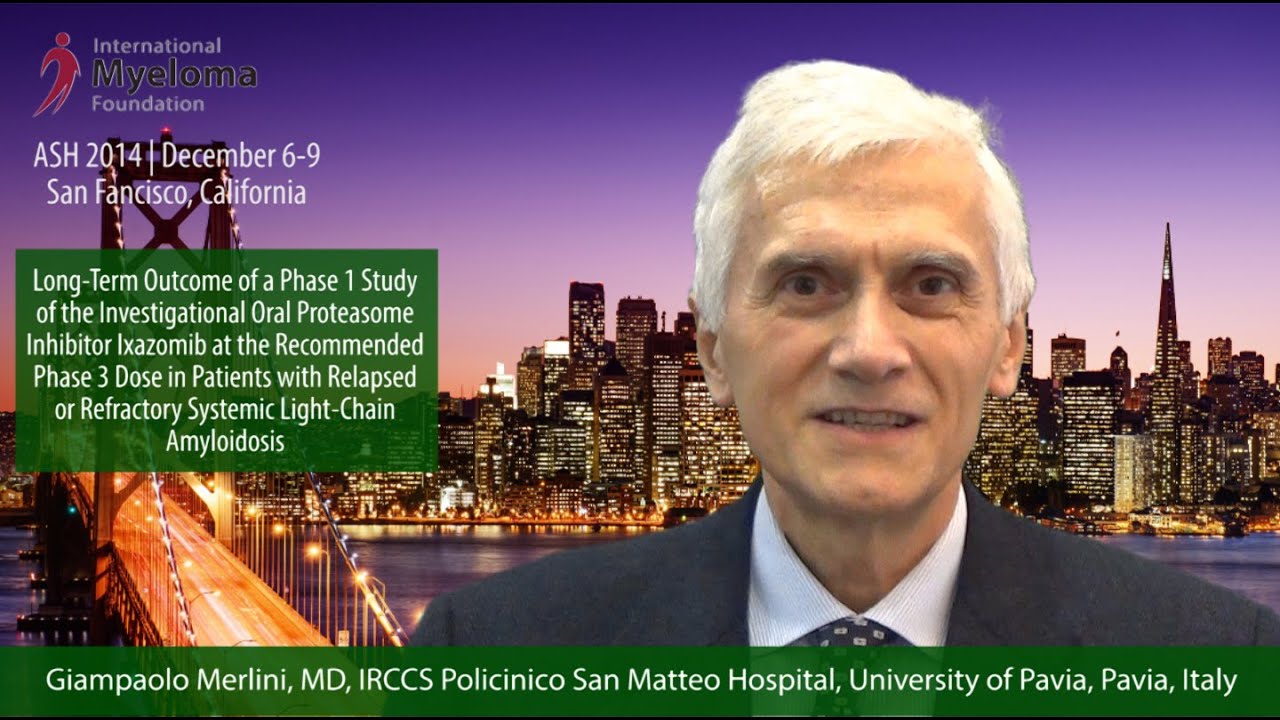 Dr. Giampaolo Merlini (University of Pavia, Italy) discusses the long-term outcome of a phase I clinical study of the investigational oral proteasome inhibitor ixazomib at the recommended phase 3 dose (RP3D) in patients with relapsed or refractory systemic light-chain (AL) amyloidosis (RRAL). These phase I study results were presented at the 56th American Society of Hematology (ASH) Annual Meeting. ASH 2014 abstract 3450.

Systemic AL amyloidosis is a life-threatening disease with limited treatment options. Response criteria have been recently updated and retrospectively validated (Palladini et al, J Clin Oncol 2012). Hematologic response (suppression of FLCs) has been shown to predict for both organ response and survival (ibid). Preliminary results from the present phase 1 study (NCT01318902) regarding the safety, tolerability, and maximum tolerated dose (MTD) of ixazomib (the first oral PI to be investigated in the clinic) in RRAL were reported previously (Merlini et al, ASH 2012). At that time, 11 pts had received the MTD/RP3D of ixazomib - 4.0 mg. Here we update the safety data (primary objective) and report hematologic and organ responses, progression-free survival (PFS), and overall survival (OS) (secondary objectives) for the extended population of 22 pts receiving the RP3D.

This is one of the first studies prospectively assessing hematologic and organ response according to the updated consensus criteria. These data suggest weekly oral ixazomib 4.0 mg is feasible and generally well tolerated in RRAL pts with vital organ dysfunction. High quality hematologic responses (≥VGPR) were observed in 43% of pts; these responses were sustained at 1 yr in 60% of this heavily-pretreated population. Achieving ≥VGPR was associated with cardiac response and extended PFS. These results warrant a phase 3 study of ixazomib plus Dex vs physician's choice of treatment, which is ongoing (NCT01659658).

Dr. Giampaolo Merlini received his medical degree and specialized in hematology and in-laboratory medicine at the University of Pavia. He is the Director of the Center for Research and Treatment of Systemic Amyloidosis, University Hospital Policlinico San Matteo, and the Director of Research of the University Hospital. He is a Professor of Clinical Biochemistry, Department of Molecular Medicine, University of Pavia, Italy. He was President of the International Society of Amyloidosis from 2005 to 2010. He received several awards, including the Jan G. Waldenström Award and the 2017 Ham-Wasserman Lecture of the American Society of Hematology. Visit Dr. Giampaolo Merlini's full biography. 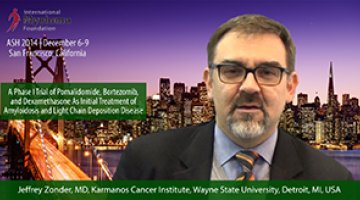 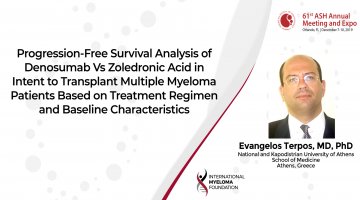