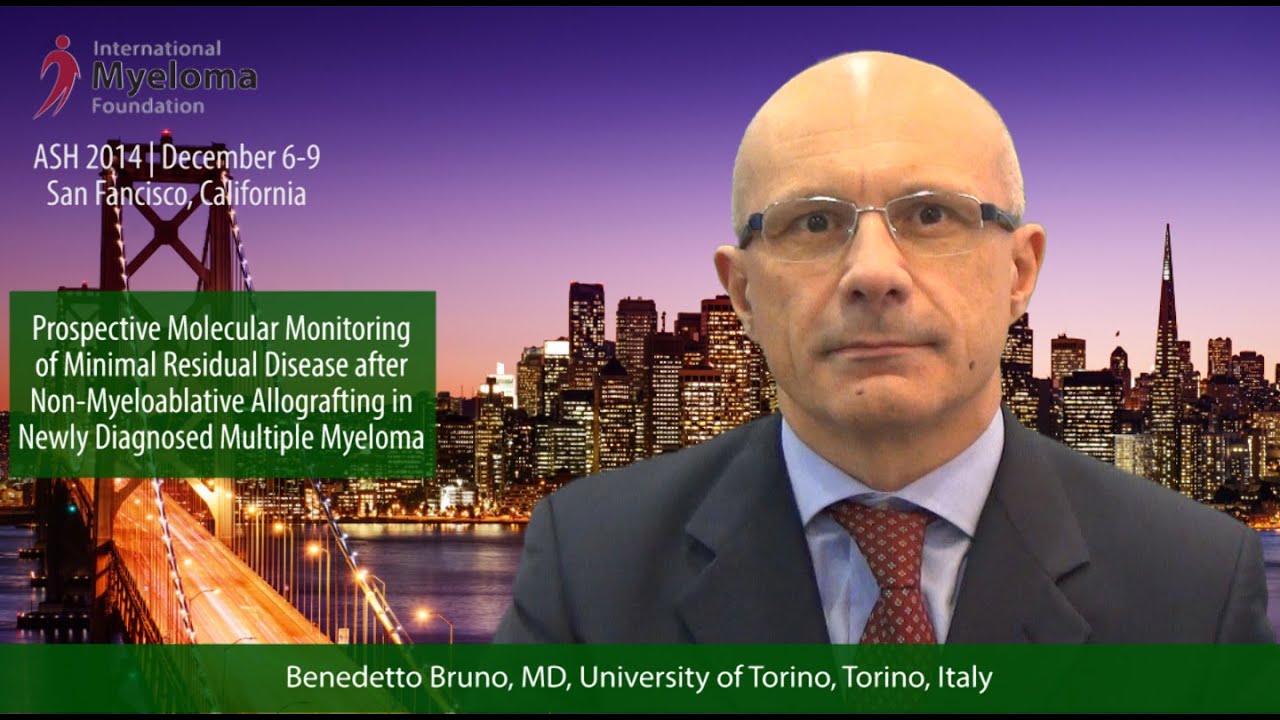 Interviewed during the 2014 American Society of Hematolog (ASH) meeting, Dr. Benedetto Bruno of the University of Torino in Italy discusses minimal residual disease (MRD) monitoring in myeloma for patients that have had a transplant (Abstract 44).

Background: Evaluation of minimal residual disease (MRD) by molecular methods is used as a surrogate of potential eradication of myeloma cells. Prolonged high-rates of molecular remission were reported after myeloablative allografting. However, recent studies on consolidation therapy after an autograft reported 18% of PCR negativity by qualitative nested PCR and a molecular response of 63% by quantitative RQ-PCR (Ferrero et al. Leukemia 2014). The aim of our study was that of evaluating depth of response by molecular methods induced by graft-vs.-myeloma following tandem autologous/non-myeloablative allografting in newly diagnosed myeloma.

Patients and Methods: Twenty-six patients enrolled in prospective clinical trials (ClinicalTrial.gov Identifier: NCT-00702247, and NCT01264315) with a diagnostic bone marrow (BM) specimen suitable for immunoglobulin heavy-chain gene rearrangement sequencing were evaluated for MRD by qualitative nested PCR and quantitative RQ-PCR. A patient specific marker was generated for 19/26 (73%). Sensitivity of nested PCR was 3 neoplastic rearrangements in 106 normal cells while each RQ-PCR showed a standard curve correlation coefficient of at least 0.95 with a slope of 3.0 to 3.9 with minimum sensitivity of 10-5 (according to Euro-MRD criteria). Transplant plan consisted of a standard autograft (melphalan 200 mg/m2) followed by 200 cGy TBI and an allograft. Post-transplant donor lymphocyte infusions or  maintenance/consolidation with new drugs were not allowed until clinical relapse. BM samples were collected at diagnosis, after the autograft, at month 1, 3, 6 after the allograft and then every 6 months or as clinically indicated. MRD negativity by nested-PCR or by RQ-PCR was defined as al least two consecutive samples scored negative.

Results:  At a median follow-up of 11.9 years (6.1-15.2) from diagnosis and 11.0 years (5.0-14.2) from the allograft, median overall survival (OS) for the entire patient cohort was not reached and median event-free survival (EFS) was 4 years from the allograft. Overall transplant-related mortality was 11.5% at 1 year and 15.4% at 5 years. Relapse was 3.8% at 1 year, 30.8% at 3 years and 34.6% at 5 years. Cumulative incidence of acute II-IV GVHD was 26.9%. At follow up, only 2 patients were on immunosuppression for limited chronic GVHD. In the 19/26 (73%) patients with a molecular marker, the rate of nested-PCR negativity remained low at month 3 (3/19, 16%) after the allograft and gradually increased at month 6 and 12 up to 44% (8/18) and 47% (7/15) respectively. By RQ-PCR analysis,  the overall tumor reduction of the whole treatment was 13.80 ln and progressively increased through the autograft, the allograft and the post-transplant period (p<0.001). After the autograft a median reduction of 4.59 ln and one month after the allograft a further decrease of 4.83 ln were observed. At month 3, MRD levels were similar to those at month 1 whereas a further decrease of 4.61 ln was observed at month 6 suggesting progressive graft-vs.-myeloma effect. At 2 years, the overall molecular response by RQ-PCR was 63%. Overall, 8 relapses occurred. Five/8 in the 11 patients who never showed a molecular response; 1 in a patient negative by RQ-PCR but positive by nested PCR. In those who reached nested PCR negativity, 1 showed molecular relapse two years before clinical relapse and 1 relapsed 8 months after the last PCR-negative sample. At median follow up, median OS and EFS were not reached in patients who achieved nested PCR negativity whereas median OS and EFS were 3.3 years and 1.5 years in the remaining patients (p 0.023 and p 0.009). Similarly, median OS and EFS were not reached in all patients who achieved a molecular response by RQ-PCR as compared with those who did not (p 0.046 and p 0.025).

Dr. Benedetto Bruno is an Assistant Professor of Hematology and Program Head at the Bone Marrow Transplantation Unit of the Città della Salute e della Scienza Hospital, University of Torino, Torino, Italy. Following medical training at the University of Pavia, Italy, Dr. Bruno worked as a hematologist at the University of Turin. In 1995, Dr. Bruno accepted a fellowship at the Fred Hutchinson Cancer Research Center in Seattle, Washington. Dr. Bruno returned to Italy in 2000 when he received a doctorate in experimental hematology from the University of Genoa. His research has been published in a large number of high-impact peer-reviewed journals.