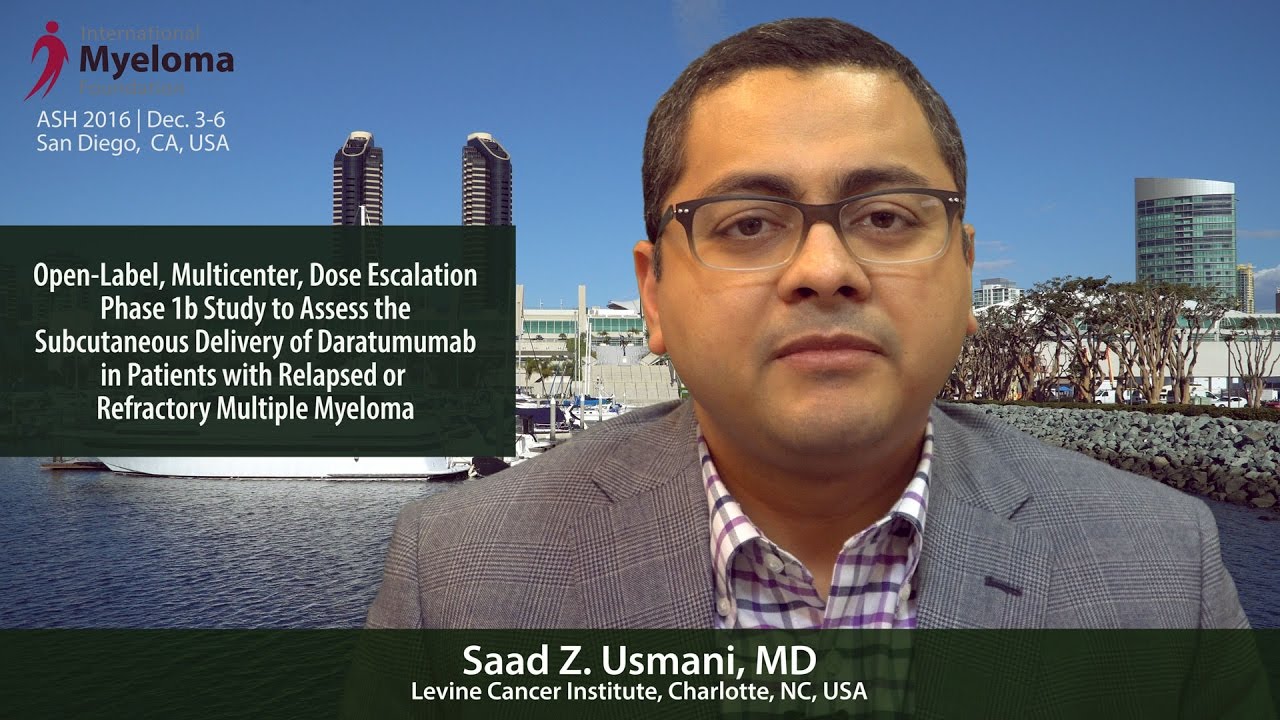 Daratumumab (DARA), a human CD38 IgG1κ monoclonal antibody, has demonstrated single agent efficacy while being highly tolerable as a monotherapy, and significant efficacy in combination with standard-of-care regimens in pts with multiple myeloma (MM) who have received ≥1 prior lines of therapy (Lokhorst HM. NEJM 2015, 373(13):1207-19; Lonial S. Lancet 2016, 387:1551-60; Palumbo A. NEJM 2016, in press; Dimopoulos MA. NEJM 2016, in press). DARA is currently administered as an intravenous (IV) infusion. Subcutaneous (SC) delivery of DARA is being tested in combination with the recombinant human hyaluronidase enzyme (rHuPH20) to facilitate systemic absorption of DARA after SC infusion into the abdominal wall. PAVO is the first study to assess the safety, pharmacokinetics, and efficacy of SC administration of DARA plus rHuPH20 (DARA-PH20) in pts with relapsed or refractory MM (RRMM).

Pts had RRMM with ≥2 prior lines of therapy including a proteasome inhibitor (PI) and an immunomodulatory drug (IMiD). Part 1 of the 2 part study enrolled sequential cohorts at 1200 mg and 1800 mg DARA dose levels to determine the recommended SC dose for Part 2. DARA-PH20 was administered in 4-week treatment cycles: QW for 8 weeks, Q2W for 16 weeks, and Q4W thereafter. DARA-PH20 was infused in 1200 mg doses in 60 mL over 20 min or 1800 mg in 90 mL over 30 min, via a syringe pump at rotating sites on the abdomen. Pre- and/or post-infusion medications included paracetamol, diphenhydramine, montelukast, and methylprednisolone. In part 2, pts will be randomized 1:1 to receive the recommended phase 2 dose (RP2D) of SC DARA-PH20 or IV DARA (16 mg/kg). The RP2D of DARA-PH20 will be selected based on a cumulative review of the pharmacokinetic and safety data obtained from part 1 and should achieve a maximum serum Ctrough during weekly dosing that is similar to or higher than that observed for the approved 16 mg/kg IV dose. Primary endpoints were Ctrough of DARA up to Cycle 3 Day 1 and safety. Secondary endpoints included overall response rate (ORR).

To date, 41 pts were treated in part 1 with SC DARA-PH20 at the 1200 mg (n=8) and 1800 mg (n=33) dose levels. Infusion related reactions (IRRs) were reported in 9/41 pts (22%) and were mostly grade 1/2 in severity including chills, fever, rigors, vomiting, itching, edema of the tongue, non-cardiac chest pain and wheezing. One pt developed grade 3 dyspnea and 1 pt required hospitalization due to fever and chills (both grade 2) after the first infusion. All IRRs developed during or within 6 hours of the first SC infusion and were controlled with antihistamine, corticosteroid, antiemetic, or bronchodilator treatment. No IRRs were reported with subsequent infusions. Overall, the adverse event profile of DARA-PH20 was consistent with that of IV DARA. Grade 3 or higher drug-related adverse events were reported in 5/41 (12%) pts including fatigue (2 pts), influenza, hypertension, dyspnea, and tumor lysis syndrome. SC administration of DARA-PH20 was well tolerated at the abdominal wall injection site with 3/41 (7%) pts reporting grade 1 erythema, induration, or burning sensation. Analysis showed a higher max Ctrough in the 1800 mg cohort in comparison to the max Ctrough achieved following IV DARA (16 mg/kg).

SC DARA-PH20 was well tolerated and achieved serum trough concentrations similar to or greater than IV DARA with a lower rate of IRRs compared to IV DARA over a significantly shorter infusion time. Preliminary data suggest that in this pt population SC DARA-PH20 may enable similar response rates to IV DARA monotherapy. The 1800 mg dose level of DARA-PH20 was selected as the RP2D for part 2 of the study. These early data support further study of SC DARA in clinical trials. Additional data on pts from part 1 will be presented at the meeting.