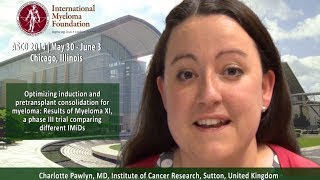 Background: Treatment with immunomodulatory agents (IMiDs) and proteasome inhibitors (PIs) has dramatically increased response rates and survival for myeloma patients over the last decade. Triplet drug combinations are more effective than doublets or single agents. The more recently developed IMiD lenalidomide, with a different spectrum of effects to thalidomide, is an excellent option for induction therapy due to its oral administration and lack of significant peripheral neuropathy (PN) when compared with bortezomib and thalidomide.

Conclusions: We have demonstrated an important difference in response between the IMiDs thalidomide and lenalidomide however further follow up is required to see whether this translates into prolonged PFS and OS.

Dr. Charlotte Pawlyn is a Clinical Research Fellow and Lecturer at the Institute of Cancer Research in London, United Kingdom. Dr. Pawlyn specializes in cancer research, genetics, and immunology. In 2015, Dr. Pawlyn was awarded a Women in Cancer Research Scholar Award at the American Association for Cancer Research (AACR) annual meeting in Philadelphia. She was awarded the scientist-in-training award for her work investigating the role of a protein called EZH2 in myeloma. Her research has linked the increased activity of EZH2 to more aggressive forms of myeloma. The exciting and novel nature of her work was recognized because it could help in the development of new targeted treatment for myeloma. 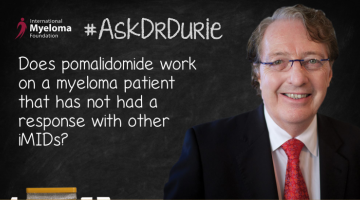 Does pomalidomide work on a myeloma patient that has not had a response with other iMiDs? 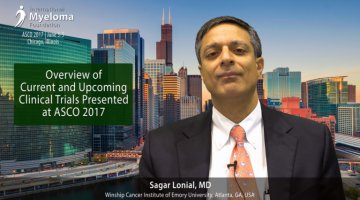