Why Belonging to a Myeloma Community is Important 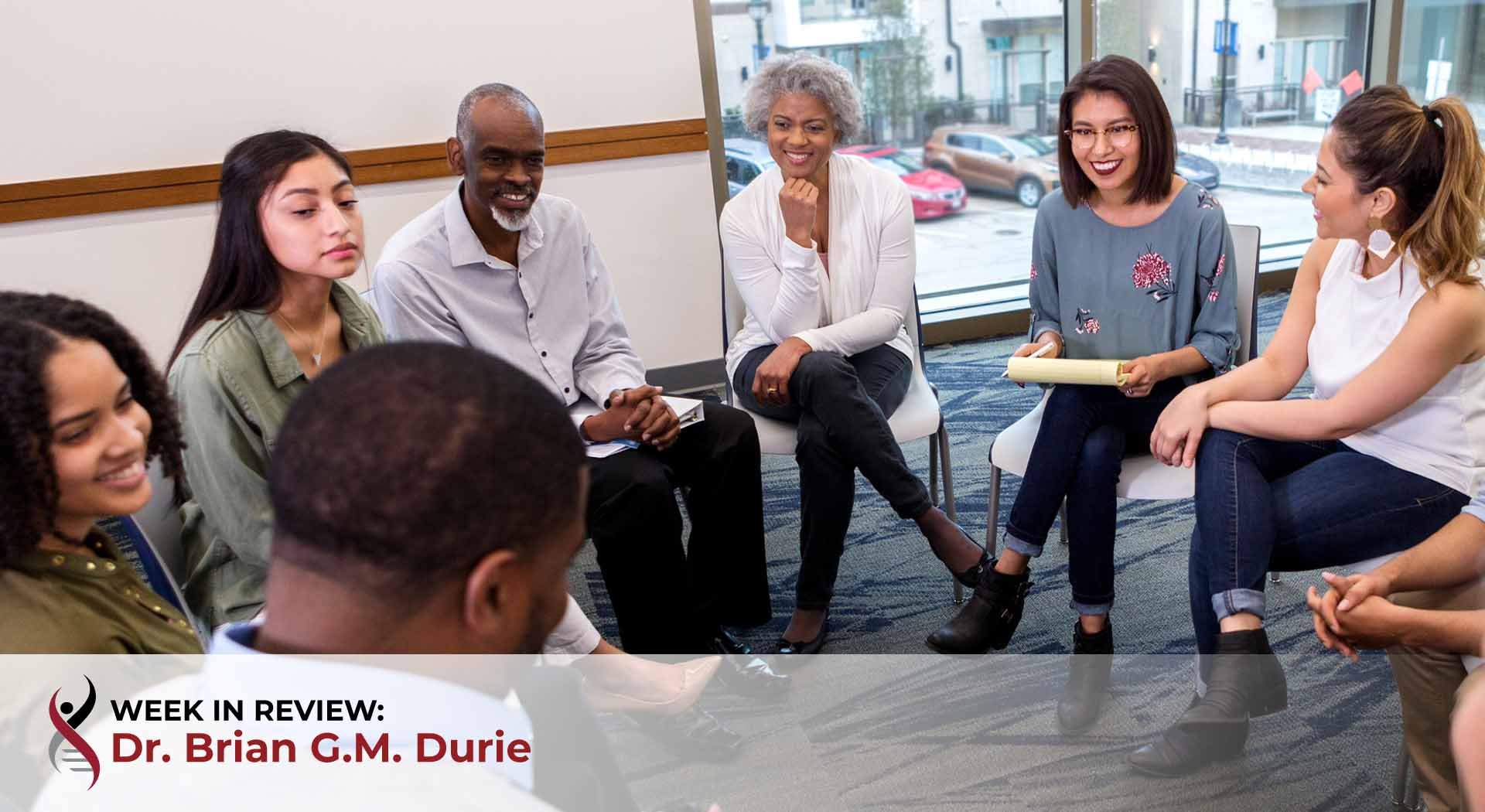 Whenever I have time, I would watch the evening news on one of the major TV networks.

I realize that I am part of a vanishing breed. Since the halcyon days of Walter Cronkite (often cited as “the most trusted man in America”), TV viewership has plummeted from 40 million to around 8 million viewers—probably even less.

Although there has been a resurgence of interest in the news because of the COVID-19 pandemic—most of the U.S. population are tuning in through cable outlets and streaming services.

What’s in the news is widely different for audiences across the U.S. There is no basic news that everyone knows about except major headlines and even then, details of news content may substantially vary. This leads to uncertainty about what of importance has happened or is really going on.

Keep Abreast of What’s Happening in the Field of Myeloma

For those living with a serious illness like multiple myeloma, it is essential to keep track of new developments. The International Myeloma Foundation (IMF) takes its mission with a strong sense of duty and pride—our services are centered on providing the myeloma community with the most reliable and most up-to-date information whether in research, education, support, or advocacy.

Across the board, there are always important developments and findings to report. By way of example, I will highlight some which you might have missed in the news.

Significant news updates and developments in legislation for myeloma patients

The Passing of the PACT Act

On Tuesday, August 2, the U.S. Senate voted (final vote at 86-11) to pass the PACT Act — “a long-sought bipartisan legislation that expands healthcare benefits for millions of veterans exposed to toxic burn pits during their military service,” states a report from CNN.

Comedian Jon Stewart actively championed for the passing of the bill and definitely helped in securing approval for this important legislation.

The ongoing tracking of cancers linked to this toxic exposure includes myeloma. This is the most significant piece of legislation to have been approved since the 1991 Agent Orange Act which included broad coverage for veteran myeloma patients.

Another aspect of the PACT Act involves exposure of veterans and their families as well as civilians to one of the worst contamination cases in U.S. history—Camp Lejeune in North Carolina.

A timeline report from Legal Examiner states: “As part of the Honoring Our PACT Act 2022 (PACT Act), the Camp Lejeune Justice Act is approved on August 2, 2022. With the passing of this legislation, veterans, their families and civilians who lived or worked at Camp Lejeune from 1953 and 1987 for 30 or more days and developed certain health conditions are now able to file Camp Lejeune lawsuits for financial compensation for lost wages, medical costs, and pain and suffering. Those who had loved ones die as a result of an illness linked to the toxins in Camp Lejeune’s water may also be able to file a lawsuit.”

Myeloma patients who developed the disease due to exposure to toxic water contaminants in Camp Lejeune are eligible to file a lawsuit for compensation.

While major strides were made to pass and reauthorize the James Zadroga 9/11 Health and Compensation Act of 2010, there were efforts to cap and limit spending for the World Trade Center Health Program, where covered conditions include those diagnosed with multiple myeloma after being exposed to the 9/11 attacks.

In an April 5, 2018 blog, I discussed  several situations where a wide range of toxic exposures have been linked to the increased likelihood of being diagnosed with myeloma.

Reducing the Risks of Myeloma and Staying Healthy

Avoiding potential toxic exposure and being aware of its occurrence are very important. Staying healthy can also be remarkably challenging.

Unfortunately, the U.S. is considered as the unhealthiest country in the world due to a variety of factors including prevalence of obesity, diabetes, a range of chronic diseases, and poverty level.

So where are people healthier?

I have written quite a bit about these Blue Zones—“places in the world where an unexpectedly high percentage of people live to be over 100 years old (or close),” wrote Blue Zones Founder, National Graphic Fellow, and New York Times best-selling author Dan Buettner in the October 28, 2012 issue of the New York Times Sunday Magazine.

Key aspects of Blue Zones certainly include lack of toxic exposure, very healthy diets, and plenty of exercise as part of their daily routine.

In Ikaria, Greece, stress is an alien concept—the island that “time forgot” because there are no clocks to be found in the island. It has also been noted that since families have owned homes and farms for many years, there are no mortgages there either!

According to a report from Business Insider, Buettner and his team stayed in Ikaria for 15 months to study the island’s centenarians—the trip was well-documented in a series of videos, where they “identified eight major secrets to reaching a record-setting age.” Discover those longevity secrets for yourself by reading the article.

On Diane Kochilas’ website, the Greek American cookbook author, celebrity chef, and cooking school owner provides helpful information about Ikaria: recipes, classes and tours, as well as books and e-books about the island.

Common features of Blue Zones are the Mediterranean-style diet and a relaxed lifestyle. However, for those living in the real “unhealthy” world, it is still possible to reap health benefits from diet improvements, increased daily exercise, and stress reduction.

Stress Reduction and the Importance of Touch

Talking about Blue Zones points to what has become “out-of-reach” during the pandemic. Because of social distancing protocols, we have literally lost “touch” in the tactile sense.

Touch Research and The Impact of Touch

Tiffany Field, a researcher at the University of Miami School of Medicine, has been studying the impact of touch for many years. In Field’s essay, she starts with newborns and children but has recently extended her research to include adults, the elderly, and the immunocompromised.

In a July 30 KCRW podcast, Jonathan Bastian spoke with Field “about the research, the science, and the wonder of human touch.”

“As someone who studies the value of touch, when this pandemic hit, did you think this period would be potentially quite harmful?” asked Bastian.

Field narrated how she and her students put together a survey where they discovered “that touch deprivation was highly correlated, highly related to anxiety symptoms, to depression symptoms, to sleep problems, to PTSD symptoms, to boredom, to loneliness.”

Field explained that these responses are “very disconcerting” because people shouldn’t be “experiencing these psychological problems during a lockdown.”

“From our previous research, that suggests that their immune systems are going to be compromised. And this is at the very time when you need something like touch to keep your natural killer cells up to ward off the virus, you’re seeing that there is this touch deprivation, which is going to hurt the immune function,” she further noted.

As Field pointed out, even a simple touch is incredibly important in triggering the immune system, in healing, and in improving health.

Wanting to “return to normal” is an expression of our need to literally be in touch with others—to be able to safely meet, have meals together, and hug our family and friends. This is a very important step, in addition to the emotional need to connect in social settings—an act that we’ve done and have been doing for most of our lives.

We look forward to returning to those days of joyful connections and celebrations.

Myeloma Care in the News

As we slowly transition back to more social connectivity, the IMF’s major goal is to continue to make sense of all the new information about the diagnosis and treatment of myeloma.

Through electronic means, publications and what we hope will be a rapid return to in-person meetings soon with Patient & Family Seminars (PFS) and Regional Community Workshops (RCW) as well as in-person support group meetings, the IMF has created an informed, up-to-date, and collaborative myeloma community to help patients, caregivers, and medical staff and personnel who devotedly care for myeloma patients.  There is a wealth of new information including archive videos, webinars, podcasts, as well as extensive text material to help guide you through the decision-making process.

The upcoming PFS Webinar on August 20 will focus on Back to Basics: From Testing to Tailored Therapy to refresh knowledge about basic testing and monitoring and the recommended Standard of Care (SOC) approaches to treatment at diagnosis and throughout the course of the disease. What are called basic Treatment Algorithms will be provided.

Obviously, we are also very excited that myeloma Support Group leaders from across the U.S. will be getting together in early September to refine strategies at the support group level and to connect with friends and colleagues for the first time in two years to get programs moving forward in constructive new ways.

Having a collaborative myeloma community is a mainstay of achieving the best for all patients across the U.S. on an ongoing basis. We are grateful for and always cherish those who work with us and are ready to give support—reaching with an open hand to help those who need to learn and adjust to a new normal and a new world of myeloma.