Virtual Vacation Includes a Visit to a Galaxy Far, Far Away and an Encounter with Ancient Woolly Mammoth DNA 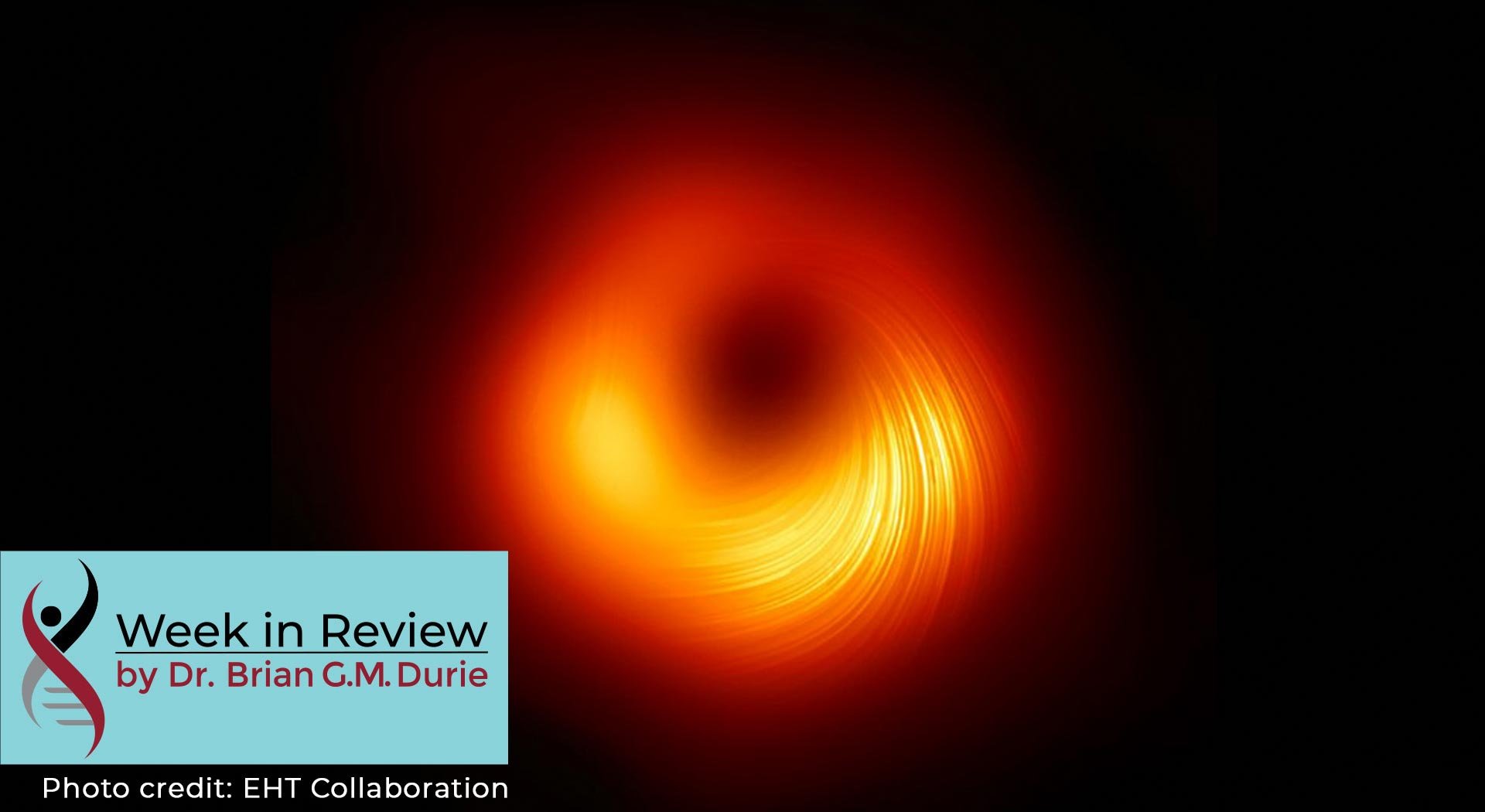 At this time of year, I am normally on vacation. Because of the pandemic I, like so many others, have not had a vacation for over a year. So, I decided to take a simulated vacation and create a more joyous environment filled with tranquility, music and articles/books not about COVID-19.

I started with music by Ludovico Einaudi, a wonderful Italian musician who can transport you to wherever you desire. I then decided to transport myself to the ends of the universe and work my way back to reality from there.

This week, astronomers at the Center for Astrophysics | Harvard & Smithsonian released beautiful images of the polarized light pattern of magnetic fields at the event horizon of the supermassive black hole M87, which lies about 55 million light-years from Earth. At the event horizon boundary most matter goes into the black hole. However, bright jets of matter and energy escape and are blown far (100 light-years) into space. The idea that the black hole can both “eat up” most matter and energy, but eject these mysterious jets is a tantalizing puzzle for scientists. There is much more to learn about how this can impact what goes on in our galaxy.

Some think that on the other side of a black hole is a white hole with matter and energy streaming into a whole new universe. More to learn about that as well! For those of you interested, a new book by Nobel Prize-winning physicist Frank Wilczek entitled “Fundamentals: Ten Keys to Reality,” explains the wonder and excitement of the forces that shape our world. The fantastic optimism he expresses is based on the fact that the human body contains 10 octillion atoms (really a lot: 1 followed by 28 zeros), a larger number than the number of stars in the visible universe. This inner vastness has such potential for evolutionary and creative change. Conversely, it seems increasingly likely there is other life out there in the vastness of other universes.

Now on Mars after a spectacular arrival, the NASA Perseverance rover is indeed currently looking for signals of life. Last week the Jet Propulsion Laboratory released audio of the crunching sound of the vehicle’s wheels moving over a rocky surface. The exploration is being assisted by a mini helicopter. The base team is truly excited and expectant. As for life on planet earth, million-year-old DNA has led to the rewriting of the family tree of the woolly mammoth (think large elephant with very large tusks). It seems that a previously unknown mammoth roamed the earth many eons ago.

More previously unknown history recently revealed: Neanderthal early humans, who lived approximately 130,000 years ago, appear to have had the capability for both hearing and speech. Something not usually considered is that for speech to be effective the listener must be able to hear and interpret the sounds. A team of scientists reconstructed the outer and middle ears of Neanderthals and found the capability for hearing the sounds of human speech. Moving ever closer to now, a traditional Shigir wooden idol, a Stone Age relic dug up by Russian gold miners in 1890, turns out to be 12,500 years old.

And thus, the history of life evolves as we learn more and more, it seems, on a regular basis. In modern times we tend to ignore the stories of “Forgotten Peoples of the Ancient World,” as author Philip Matyszak describes in his vivid tales of unsung but very sophisticated peoples like Akkadians and Hittites, who lived up to 2,700 years BC in the first civilizations in the Middle East.

Moving back towards the reality of now

When these ancient civilizations collapsed, we moved into what is traditionally called the Dark Ages (AD 400-1500). However, in “The Light Ages” by Seb Falk, the author illustrates that this was actually a very active transitional period, quite sophisticated in a variety of ways. Physicians administered whatever remedies were feasible at the time and they were regulated by local laws that monitored patient satisfaction and health outcomes to avoid unscrupulous peddling of medications. This period included both a plague and the breakthrough scientific discoveries of Sir Isaac Newton (watching apples fall in his quarantine garden, gravity and all that!).

Before turning to the reality of 2021, I needed to have a non-virtual lunch at a local Italian restaurant that was able to stay open by expanding into the parking lot with umbrellas and plants. The owner is a lovely woman who maintained all her staff during the pandemic, including the chef. An excellent pasta provides a boost in resilience to ponder the future in 2021.

What can we expect now?

Having been lucky enough to be fully vaccinated, I appreciate the positive psychological impact of that. The accelerated vaccine rollout is a huge step forward, especially for myeloma patients who can enter into a safer and safer community week by week. Within 4-to-6 weeks, I am hopeful that the vaccination process will really make a difference in our day-to-day lives as we attempt to achieve some semblance of normality.

It is unfortunate that the newest vaccine from AstraZeneca had some communications missteps (an “unforced error,” in the words of Dr. Anthony Fauci). The updated news from the company indicates 76% efficacy, versus 79% from February data, and still is 100% effective at preventing serious disease and deaths. This is a very effective vaccine that will probably receive accelerated approval in the coming weeks.

Some important very good news is that COVID-19 “long haulers” (those with persistent symptoms) can improve with a COVID-19 vaccination. In a recent survey, approximately 40% report significant or complete improvement. This suggests that boosting the anti-COVID-19 antibody levels is sufficient to finally clear the virus from the system. Good news indeed. This also supports the notion of vaccinating those who have had prior infection to get that boost in antibody levels.

A virtual vacation is really helpful to clear the mind and focus on what is important in life. In closing, I share this video of dolphins swimming in the Grand Canal in Venice, which is much quieter now because of the lack of tourists. Nature can bounce back and we can, too.