Understanding immune monitoring, and why global obesity is on the rise

Ever since the IMF launched the Black Swan Research Initiative (BSRI) in 2012 to find the pathway to a cure for multiple myeloma, the project has focused on achieving and documenting minimal residual disease (MRD), the lowest level of disease possible with currently available therapies. However, with both early disease (monoclonal gammopathy of undetermined significance, MGUS, and smoldering multiple myeloma, SMM) and after therapy, many patients can do well even with obvious residual disease. As the BSRI team is learning, MRD assessment is but one step to understanding how myeloma progresses. We can gain even further insight by examining the role of immune cells, the key factor in controlling residual disease.

There are many types of immune cells: B cells, T cells, NK (natural killer) cells, monocytes/macrophages, and dendritic cells, to name a few. Observing the changing pattern of these cells throughout the disease is like looking through a kaleidoscope, which I loved to do as a child. The multicolor patterns were endless. The same is true now as BSRI gears up with our research partners in Salamanca, Spain to use multicolor flow cytometry with 26 colors or more to document many, many immune cell subtypes with myriad patterns over time. Understanding the significance of these patterns is our goal.

The immune system: friend and foe

The immune system is essential to fight off invading microbes, such as bacteria and viruses. To do this, the immune system must distinguish between what is you (self) and NOT you (foreign). But to survive, microbes mimic self- or auto-antigens, making it very difficult to know what is self and what is not. This can create an ongoing battle with plasma cells producing as many antibodies as possible and other immune cells attempting to regulate appropriately. Sometimes the system breaks down and MGUS/SMM/MM emerges. But why does the system either retain control or break down and allow myeloma growth? There can be a virtual stand-off with a state of chronic immune stimulation or inflammation, which becomes the feeding ground for multiple myeloma. We already have clues that different subtypes of T cells and NK cells, as well as certain macrophages, are very important in this complex battle.

Documenting who is winning

Is myeloma under control or not? Studies in Salamanca have already shown that when myeloma is active, myeloma cells enter the bloodstream. Sometimes, with obvious residual disease in the bone marrow, no myeloma cells enter the blood. These patients do well. Conversely, in those with circulating plasma cells documented using next-generation flow (NGF) testing performed on the blood, early relapse within nine months or so is likely. But why?

This is what we are attempting to find out, using a technology called mass spectrometry to detect a very low level of MRD (or not), along with detailed immune profiling using 26-color technology—or more. Interesting results will emerge very quickly and findings will be presented and published. Stay tuned.

Next week: Testing in young patients and early disease.

Now that obesity is becoming more clearly linked as a risk factor for myeloma, it is important to understand what is causing the global obesity epidemic.

The World Health Organization (WHO) has discovered that the highest level of overweight or obese children is found in the Pacific Islands, such as the Cook Islands, Marshall Islands, Tonga, Samoa, and the island of Nauru, which has a staggering 36.3 percent obesity rate in children 5 to 9 years old. By comparison, the obesity rate in the U.S. is 22.7 percent; in France, it’s 10.4 percent; and in places like Ethiopia and Cambodia childhood obesity is less than 1 to 2 percent. But why the differences?

WHO has noted that “replacing traditional foods with imported processed food has contributed to the high prevalence of obesity and related medical problems in the Pacific islands.”  This extreme situation provides a lesson for us all. Although there are several risk factors for obesity—including consuming high-calorie beverages, lack of exercise, and potential toxic exposures—the contents of processed and so-called “ultra-processed foods” are key risk factors. I have previously referenced the “NutriNet-Sante” study, which shows that a 10 percent increase in the proportion of ultra-processed foods (these include everything from salty snacks, processed meats, “sugary” products, ultra-processed fruits and vegetables, to breakfast cereals) is linked to a 10 percent increased risk of cancer overall. A study from the University of Navarra in Spain confirms a link between processed-food consumption and significant obesity.

So, the bottom line is that myeloma patients need to very wary of processed foods.

Prevention and the Search for a Cure Go Hand-in-Hand 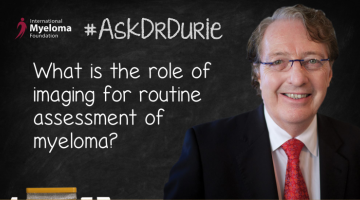 What is the role of imaging for routine assessment of myeloma?