Multiple myeloma only accounts for 2% of all cancers BUT is the most common blood cancer in African Americans1.

Furthermore, multiple myeloma is the second most common hematologic cancer in the U.S. and the most common in African Americans.

The following graph shows All New Cases of Myeloma in the U.S. in 2017:

African Americans have more than twice the incidence rate of multiple myeloma compared to white Americans2.

Also, African Americans account for 20% of patients currently with myeloma.

By 2034, it is estimated that African Americans will make up roughly 24% of the newly diagnosed multiple myeloma population3.

Multiple myeloma is one of the malignancies with the greatest disparity in incidence and prevalence between African Americans and white Americans4. 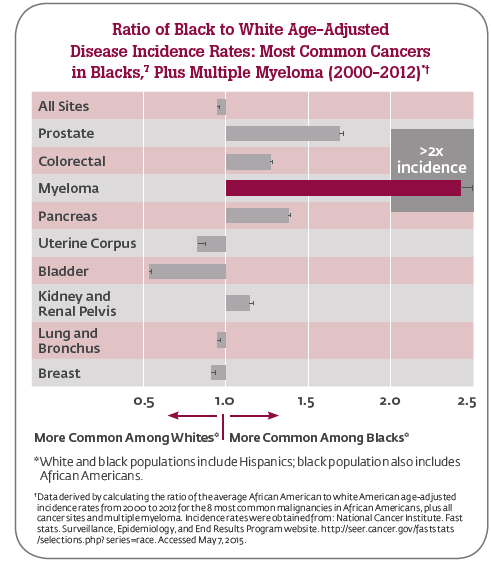 Multiple myeloma is a very important disease in the African American community. It is much more common than most people know despite being a relatively rare disease. It will become even more common in the years to come!

Myeloma Is Different in African Americans

African Americans have an average earlier age of onset of myeloma5.

The pre-myeloma condition MGUS is more common in African Americans. Studies in Africa have also shown this increased incidence6.

MGUS is twice as common in African Americans than white Americans:

Some evidence suggests the biology of myeloma may be different in African Americans when compared to white Americans7.

Genetic studies are ongoing to better understand how myeloma may be different in African Americans.

Survival has dramatically improved in myeloma over the last decade – more than almost any other cancer. Recent treatments have led to a doubling of overall survival of patients with this disease. Longer survival is a result of autologous stem cell transplants, newer drugs, and using these drugs in combination.

Unfortunately, the same degree of improvement in survival has not been seen in the African American population8 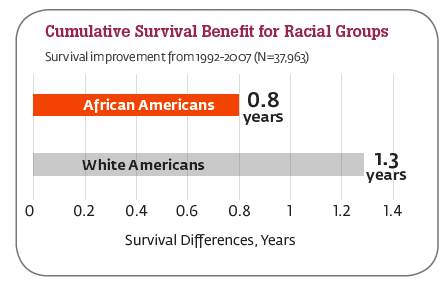 The following study compares the improved survival outcomes for white race individuals, black race individuals, and those of Hispanic descent. It shows that African American patients have not seen the same degree of survival improvement.

Multiple myeloma is a cancer that has made amazing progress in the last 10 years with much-improved survival. However, this improvement has not been fully seen in the African American community. Because this is very concerning, we want to find ways to overcome this disparity.

The lack of relative improvement in survival in African Americans with myeloma is complex but is likely due to multiple factors, including reduced use of autologous stem cell transplant, access to novel therapies, and enrollment in clinical trials.

Rates of the use of stem cell transplant are rising in the U.S. for myeloma patients, but sadly not at the same rate for African American patients9. 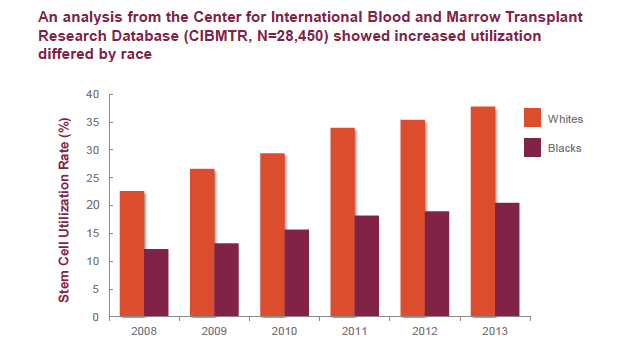 Indeed, African Americans are 37% less likely to undergo stem cell transplant even though this is the standard of care for eligible patients10.

Furthermore, African Americans are less likely to be treated with newer drugs and combinations of drugs that are so important in myeloma12.

Despite the fact that African Americans comprise 20% of the population of myeloma patients, they only account for 6% of patients in clinical trials13. 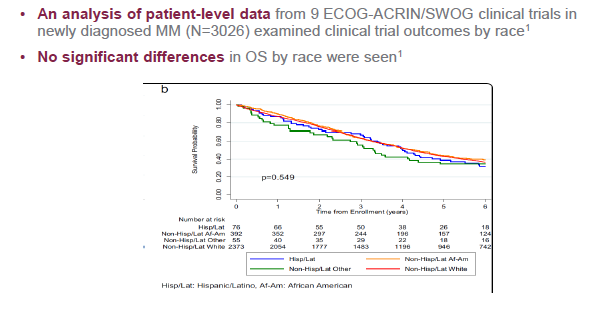 The factors for this disparity in the African American population are both healthcare provider issues and patient-related issues15:

Clinical trials are a very important way that new drugs and new approaches are offered to patients. They also provide options to patients who have exhausted all standard approaches. More and more clinical trials are now ongoing in multiple myeloma and are available across the country. Making these accessible to the African American community must be a priority and is, indeed, to the IMF.

The IMF and African Americans with Myeloma

The IMF is deeply committed to the whole myeloma community and has launched an initiative to overcome many of these disparities in the African American myeloma population.

In keeping with the four pillars of the IMF, the initiative will involve activities in Support, Education, Advocacy, and Research.

The IMF is uniquely poised to do this in light of the resources we provide across the world. Find a Support Group near you.

Furthermore, the IMF has a 30-year history of partnering with others to improve the lives of patients with myeloma as we seek the cure. We work with patients, caregivers, providers, myeloma experts, communities, industry, and all others involved in the lives of myeloma patients.

Research
Black Swan Research Initiative
For the world’s leading multiple myeloma experts, failure to find the cure for this cancer just isn’t an option. We’ve banded together the world’s brightest minds in research, oncology, and health studies to form the IMF’s Black Swan Research Initiative® (BSRI) – a leading-edge project that pits our scientists and leaders on the frontlines against myeloma. Together our mission is to find the first definitive cure for myeloma and help bridge the gap from long-term remission to cure.
International Myeloma Working Group

The International Myeloma Working Group (IMWG) emerged from the IMF’s Scientific Advisory Board which was established in 1995.

Education
Download Our Cancer Publications
Are you in need of the most current information about multiple myeloma? Learn about IMF's library of cancer articles, journals, and other publications for patients, caregivers, and healthcare professionals. All are available free of charge online and in printed copy by mail. Many core booklets and key medical articles are translated as well. Download our cancer publications here.
Contact the InfoLine
The IMF’s InfoLine is here for you for your myeloma-related questions and concerns. The InfoLine team consistently provides callers with best information about myeloma in a caring and compassionate manner
Support
Find a Support Group
We have facilitated a network of 150 myeloma-specific support groups that hold regular meetings in the U.S. So no matter where you are, we can help you find or create a multiple myeloma support group and connect with other survivors and caregivers.
Smart Patients
Smart Patients is an online community where patients and caregivers affected by complex illness learn from each other about treatments, challenges, and how it all fits into the context of their experience.
Advocacy
Myeloma Advocacy Action Center

Advocacy is the act of supporting a cause or idea. It involves speaking out on issues that you care about and offering ways to improve upon them.

Diversity Multiple Myeloma
Black men and women are diagnosed with myeloma at approximately twice the rate as the combined average for all ethnic back­grounds, but we don’t yet know all the reasons why.

With equal access, African American patients have superior survival compared to white patients with multiple myeloma: a VA study. Published in the journal Blood in June 2019.

Cancer Facts & Figures for African Americans in 2019-2021. Published by the American Cancer Society.

Comparable survival of African-Americans and Caucasian patients with multiple myeloma: A hospital-based study including 117,926 patients. Published in the Journal of Clinical Oncology in May 2019.

Racial and insurance disparities in multiple myeloma management in a referral center. Published in the Journal of Clinical Oncology in May 2019.

Cancer statistics for African Americans, 2019. Published in CA: A Cancer Journal for Clinicians in February 2019.

Celgene has published this brochure: Standing in the Gaap: For African Americans Living with Multiple Myeloma.